The controversial cab-hailing app is promoting a lazy lifestyle with its latest ad campaign in Singapore. The firm is walking a thin line as its sustainability credentials come under ever-closer scrutiny.

If Uber’s latest ad campaign in Singapore is to be taken seriously, there’s no need for us to walk anywhere anymore.

Cannily placed on the walls of the city-state’s busiest train stations, large billboards have been attempting to sell commuters the cab-hailing app’s services as an alternative to even the shortest of walks.

Singapore’s tropical climate is too hot and humid for its citizens to be expected to place one foot in front of the other to get from A to B, the company is suggesting.

We could lounge in bed for 10 more minutes every day if we took an Uber rather than walked to work, according to another ad.

Yet another poster invites gym users who’ve had enough of exercising their legs to slump in an Uber car at the top of the station’s staircase.

Just as Netflix once said that sleep is its biggest competitor, Uber is taking on human locomotion. Which is almost the opposite approach to the one it took about a year ago, when its ‘Make your move’ video campaign saw improbably joyful millennials leaping out of Uber cars and bursting into dance. 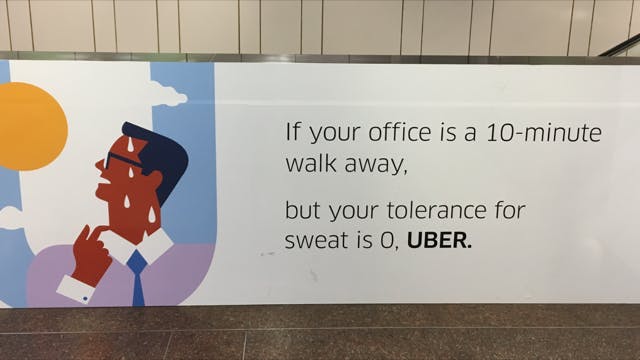 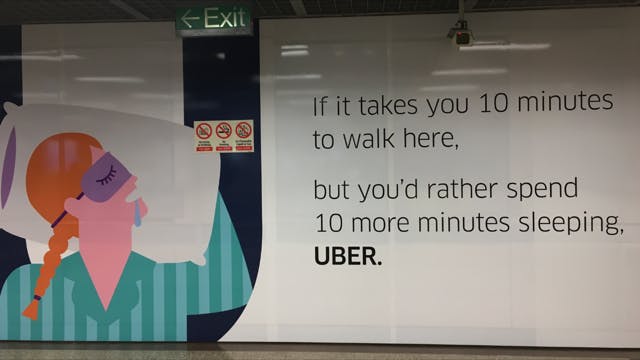 Take an Uber and you’ll get 10 more minutes in bed. Image: Eco-Business 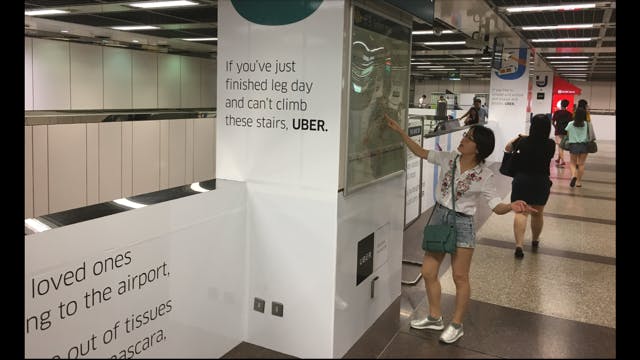 With its latest attempt to cash in on Singapore’s culture of convenience, the controversial San Francisco-based tech giant could be undermining the country’s efforts to promote public health and achieve a ‘car-lite’ society.

By suggesting that we should sleep for longer instead of stretching our legs, Uber is brushing up against the government’s efforts to get more its citizens moving.

Singapore’s Health Promotion Board is worried that 40 per cent of the population of 5.7 million do not get enough exercise, which has led to a rise in heart disease and diabetes - two of the country’s biggest killers.

When Eco-Business put this point to Uber, the company replied that while walking “can be a convenient way to get around, similar to public transportation and other commuting options, there are times when individuals might need support and options to get around more efficiently.”

For instance, after a late night out or on a grocery run. “We’re committed to providing a safe, reliable, convenient way to get around Singapore,” the company said.

The campaign also emerges at an awkward time for Uber’s green credentials.

This week, a report in national newspaper the Straits Times suggested that private-hire cars could be making Singapore’s increasingly clogged roads even more congested.

This flies in the face of the country’s proclaimed goal of being a ‘car-lite’ nation, which is one of the key pillars of the Sustainable Singapore Blueprint, a S$1.5 billion push to green the city-state announced by the prime minister in 2015.

Since 2013, when Uber launched in Singapore along with rival Grab, the number of taxi-like services has jumped from nothing to 40,000. This is far higher than the population of regular taxis, which number 25,700.

Not only that, but Uber’s cars are clocking 54 per cent higher mileage than the average passenger car, according to data from Lion City Rentals, the local car rental firm that Uber owns.

These statistics cast doubt over the idea that Uber is contributing to the sharing economy, and making use of private cars that would otherwise sit idle in parking lots.

As Jeff Turner, the chief sustainability officer for nutrition giant DSM argued at the Eco Action Day event organised by Eco-Business and Japanese electronics firm Ricoh Asia Pacific in June, people are leasing cars to become Uber drivers, and circling city centres waiting to pick up customers. “How is that reducing vehicle use or curbing emissions?” he asked.

Uber argues that it is doing the environment a favour by providing an alternative to owning a car.

This is true, although car ownership in Singapore is already low given the prohibitively high cost of owning one (a car ownership license often costs more than the car itself), and the enduring appeal of one of the world’s finest public transport networks.

Uber’s sustainability saving grace is UberPool, its ridesharing service that picks up multiple riders heading in the same direction, saving on fuel consumption and emissions. It’s also by far the cheapest option for the consumer.

Introduced in Singapore just over a year ago, UberPool has helped to save on car journeys equivalent to 48 trips to the moon and enough petrol to fill up 15,900 cars, the company tells Eco-Business.

But UberPool is not anywhere near as popular as its regular pick-up service, with only one in three Uber journeys using the carpooling option.

Unless you’re a regular cab driver, the benefits of Uber are compelling for consumers.

The company has, along with Grab, forced a moribund local taxi sector to improve its service (more regular cabs have joined the 21st century by using GPS rather than asking their passengers for directions).

Uber is cheaper and more responsive than regular taxis, and is a useful complement to public transport, filling in the travel gaps where it is needed.

But if the company wants to position itself as a responsible business and true pioneer of the sharing economy, it should push carpooling harder, and not encourage Singaporeans to be driven when they could easily be walking.