The changing face of electricity in Malaysia

It is increasingly hard to dispute that decarbonisation is the way forward for the energy industry. Is Malaysia on the right track?

Thomas Edison, founder of the Edison Electric Light Company in New York City, once said: “We will make electricity so cheap that only the rich will burn candles.” A hundred years later, those words have yet to come true, but we are getting there.

At the Fourth International Sustainable Energy Summit (ISES) held last month in Kuching, Malaysia, it was obvious that the cost of electricity is indeed coming down and, importantly, the reduced cost of renewable energy is shifting utilities towards becoming greener and cleaner.

Yet renewable energy still only accounts for about a fifth of electricity use worldwide. Speakers at the Summit said this did not have to be the case, and findings from the two-day Summit disclosed that utilities need to capitalise more on innovation to scale up variable renewable energy, and that unlocking financing was key for renewable projects.

Solar power is the obvious renewable energy choice. The main obstacle to solar uptake was once the capital cost of plant and equipment. But with cheaper materials, advanced photovoltaic technology and economies of scale, solar is now as low as 7 US cents per kilowatt hour, cheaper than most current coal-fired power plants. Driven by green mandates, China and India, two of the world’s most populous countries, are lining up targets to add 80 gigawatts and 20 gigawatts respectively of installed solar capacity by 2022.

In Malaysia, natural gas makes up the majority of energy production though coal is a close second. According to International Energy Agency statistics from 2015, the share of electricity generated from renewable energy including hydro, stands at 10 per cent. Removing hydropower, however, sends this figure plummeting to 0.7 per cent. 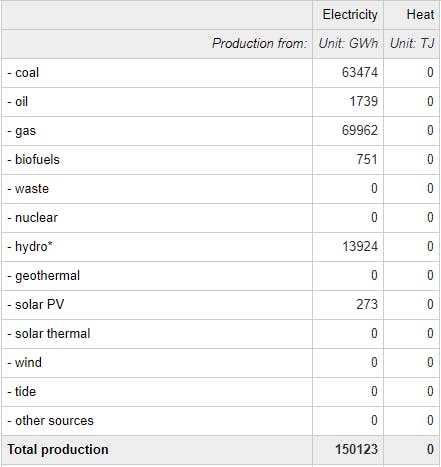 A breakdown of Malaysia’s energy mix from 2015, according to the IEA. Image: International Energy Agency

To demonstrate how Malaysia can run on renewable energy, the state of Sarawak plans to have roughly two-thirds of its electricity coming from an installed capacity of 7,115 MW of hydropower by 2026. Sarawak’s abundance of rivers together with a mountainous terrain favours the generation of hydro-electricity. The transmission and distribution of electricity will be supported by the construction of a 500-kV transmission line running the length of the state.

In the palm oil industry, biofuel and biomass coming from refining and waste respectively are additional sources of green energy. Palm oil exports are a major contributor to Malaysia’s economy and there are opportunities to produce and export biofuel as a renewable resource—this would go some way to redress the industry’s reputation. Controversies surrounding palm oil farming in Southeast Asia have led to the current EU ban on palm oil imports.

However, making renewable energy mainstream will require changes in current system planning and forecasting as solar is limited by daylight hours, plus wind and hydro power are affected by seasonal fluctuations. Storing energy during generation periods for later release can address these issues, making it possible to have a fuel mix that reduces dependency on fossil fuels and at the same time is sustainable and reliable.

Other than bigger storage batteries, speakers suggested novel solutions such as pumped water storage using disused mines, hydrolysis to generate hydrogen as a fuel, and other green solutions like urban farms.

But ultimately, realising Edison’s vision of cheap electricity requires new ways of electricity transactions. Like other commodities, electricity pricing depends on how much is needed and how much is available at the time.

In electricity auctioning—unlike traditional auctions where luxury items like paintings are sold to the highest bidder—electricity suppliers compete to sell at the lowest cost to customers. Hence, not only do cheap electricity prices benefit the consumers but also renewable energy would be able to compete with coal and other fossil fuels.

To further encourage renewables, private owners of solar panels can sell excess electricity back into the grid at handsome margins through feed-in-tariff rewards. Coupled with blockchain technology buyers would be able to connect directly with sellers of electricity in a closed system using tokens as the medium of transaction. As the system is controlled and transparent, individuals as well as institutions are now able to trade and obtain electricity from sources of their choice i.e. ones that are greener, cleaner and sustainable.

The technology and the know-how means that a future of sustainable energy is around the corner—if we make this choice.

Dr Thomas Tang is Director of Partnerships for Eco-Business in Kuala Lumpur and Hong Kong.