Sparking a Revolution for our oceans

A new documentary by environmentalist and filmmaker Rob Stewart doesn't shy away from the scale of the problem of climate change. But it convincingly leaves viewers with a feeling that change is possible, and their actions are an important part of the solution.

World Oceans Day is observed on June 8 every year, and this year’s theme ‘Healthy oceans, healthy planet’ shines a light on the increasingly dire state of the world’s water bodies and serves as a bleak reminder of how closely human well-being is linked with the sea.

United Nations Secretary-General Ban Ki-moon, in his message commemorating the day, which comes just three days after World Environment Day, noted that oceans not only provide natural resources, foods, and jobs to humans, they also regulate the climate and are home to much of the planet’s biodiversity.

But their ability to carry out these functions is constantly undermined by human activities including overfishing, pollution, habitat destruction and the introduction of alien species into oceans, says the United Nations in its campaign.

While visuals of violent and exploitative industrial fishing, huge swathes of plastic waste and pollutants pouring into the ocean are par for the course in campaigns to save oceans , a new documentaryby Canadian environmental activist and film-maker Rob Stewart explores a threat that is much less visible but equally deadly - climate change.

Revolution, released in April this year and available to view online, showcases the impact of climate change on the world’s oceans and the many plant and animal species that depend on them. It sets the scene by explaining how rising levels of carbon dioxide in the atmosphere are causing oceans to become warmer and more acidic, which in turn poses a danger to coral ecosystems, and as Stewart puts it, every ocean-dwelling organism “that needs a skeleton or shell”.

Even beyond the ocean, “humanity cannot exist in its present form if ocean acidification continues,” warns Stewart as he points to the burning of fossil fuels as the key driver of ocean damage.

The film gets off to a slow start, with more attention on Stewart’s personal story and movie-making process, and the praise he garnered for his earlier shark documentary, Sharkwater, than is really relevant to the movie’s key message.

A turning point in the narrative is when at an event to discuss Sharkwater, a young girl asks Stewart about the value of saving sharks in the wider context of the fragile health of oceans.

What follows is an important, emotional, and inspiring exploration of the the complex political and economic forces that are fuelling climate change. These include the powerful fossil fuel industry and the inability of governments to reach a meaningful and legally binding agreement on reducing greenhouse gas emissions.

Through footage of pristine oceans, the antics of lemurs in Madagascar and lush jungles around the world, juxtaposed against devastating scenes of forest and landscape destruction caused by activities such as Canada’s mining of oil from its tar sands, Stewart creates a strong sense of what the world stands to lose if the way we currently consume energy and resources does not change.

It is the financial interests of companies which have a stake in these polluting but extremely profitable industries that is at the root of climate change, Stewart argues.

The anecdotes and experiences of these people from forms a candid but disturbing narrative of how deeply entrenched political and economic interests are in the climate crisis.

Stewart also takes aim at the UN’s climate change negotiations process, accusing some politicians of being “at the beck and call” of fossil fuel corporations, and deliberately obstructing the talks so that no agreement on cutting emissions is reached. 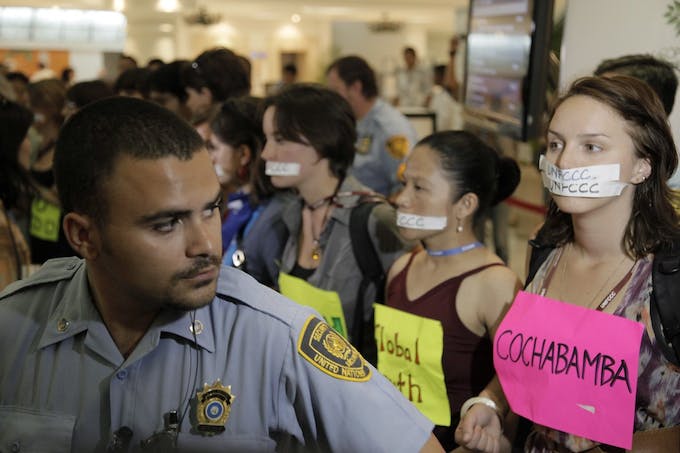 Protestors at COP 16 in Cancun, Mexico, in 2010. Image: TheRevolutionMovie.com

His footage of ground-up efforts at the 2010 climate conference in Cancun, Mexico, is a particularly heartbreaking presentation of the current disparity in the power held by groups on both sides of the climate fight.

In scenes from the event, activists spend an entire day counting aloud the ever-increasing number of climate-related deaths worldwide, only to be strong-armed out of the conference in helpless tears,

Revolution shows that climate activists certainly have a mammoth task ahead, but they are also the planet’s main source of hope that change is possible. The film ends on an optimistic note about the potential of ground-up campaigning and individual efforts to push for change at the policy and corporate level. A successful effort by sixth grade students to get shark-finning banned in Saipan, Micronesia is showcased as a small but important illustration of this.

With its engaging visuals, candid interviews with climate experts and activists, and no-holds-barred take on those responsible for climate change, Revolution leaves viewers with no doubt on the urgent need to get involved in ongoing advocacy or community efforts, and buzzing with the hopeful and indignant energy to go out and do so.