As the world’s biggest manufacturing centre and energy consumer, China’s reliance on oil consumption necessitates an actionable solution. Private cars are the worst polluters in China, and the government has aggressively urged the automotive industry to improve its energy efficiency.

The government’s high electric vehicles target, however, have repeatedly proven to be too ambitious, as evidenced by lower than expected sales and adoption rates.

Not only is the market unprepared for the government’s goals, but developers also lack the ability to produce such advanced technology. A more feasible alternative for the China would be the use of Hybrid Electric Vehicles (HEVs).

A white paper by Asia-centred consultancy Solidiance, entitled “EV In China - Moving Forward but not as fast as expected“, shows that HEVs would act as an intermediate step between meeting the demands of today’s consumers and the Chinese governments’ goals of eliminating air pollution. HEVs will also streamline electric vehicle production for future BEVs (Battery Electric Vehicles).

To stimulate supply and demand, the government and OEMs will need to expand the development of HEVs as a transitional predecessor to pure BEV

China has set big goals on fuel consumption and emission levels in its 12th five-year plan. Although SUV or sports utility vehicle sales are forecasted to triple by 2020 based on the Solidiance document, the Asian giant expects fuel usage to decrease and the share of non-fossil fuels to increase by up to 11.4 per cent and 15 per cent in 2015 and 2020, respectively. Meanwhile, CO2 emission levels are aimed at the reduction of 17 per cent per unit GDP. 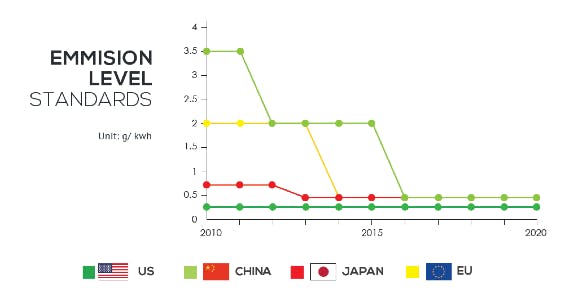 Source: Solidiance, “EV In China - Moving Forward but not as fast as expected”

The government is serious about its targets, putting in place stringent enforcement mechanisms such as penalties and taxes should these not be met. But together with this, it also has a variety of incentives to develop better HEV and BEV technologies. Approximately 10,000 auto companies have been given purchase subsidies, research and development (R&D) incentives, and tax exemptions to achieve the target. 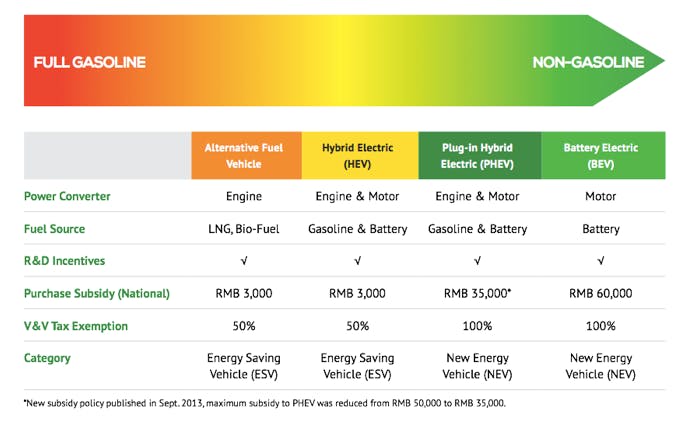 But despite aggressive endeavours by the government, the current development stage of battery-operated cars does not significantly fulfil initial expectations. The biggest factors inhibiting private Chinese buyers from buying more battery operated electric vehicles are unfamiliarity or lack of name-brand recognition of BEV cars, and financial restraints. On the other hand, battery electric vehicles have been widely adopted across the public sector.

Among currently available technologies, BEV actually receives the most benefits through different subsidy schemes, but it is not yet popular among consumers due to its poor performance and lack of infrastructure, nor among OEMs (original equiment manufacturers) due to non-substantial ROI received. Even with significant reinforcement from the central government, OEMs remain reluctant to pursue the central government’s targets towards BEV adoption without a more substantial ROI. 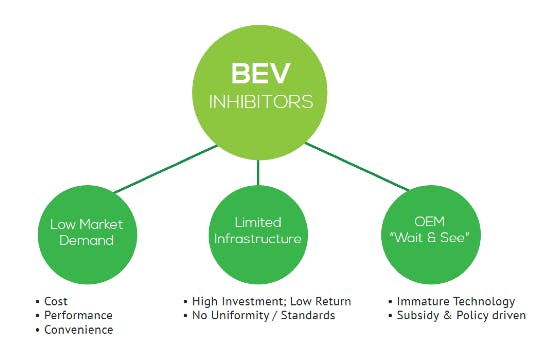 Low market demand for electric vehicles precipitates a cyclical effect of minimal investment in necessary infrastructure to support the EV adoption rate, with the considerably inadequate subsidies for infrastructure players.

A single charging or battery-switching station costs CNY 5 to 10 million to construct. There is also an absence of clear, standardized battery charging or switching methods. High investment for low returns in areas with insufficient electricity provisions eventually results in many non-functioning charging stations. Given that, OEMs are shifting their priority away from BEV development into HEV and Plug-in Hybrid Electric Vehicles (PHEVs), as seen by the significant adoption of HEVs, which accounts for up to 60 per cent in the total green market.

To stimulate supply and demand, the government and OEMs will need to expand the development of HEVs as a transitional predecessor to pure BEV. HEV can increase market demand for BEV by meeting consumer requirements, reducing dependence on infrastructure during development, and working with available technology to achieve fuel consumption reduction targets.

Hybrid electric vehicles are also perceived positively by consumers in cost, performance, and convenience. They are more affordable, and they offer shorter periods of time for ROI and perform similarly in acceleration tests compared to conventional vehicles. They also do not rely on the limited number of existing charging stations.

The HEV adoption trend is also picking up among leading OEMs. Case in point: Nissan recently focused their production efforts on HEVs by launching the HEV Friend-me in 2013 after the unsuccessful market adoption of its BEV Leaf series. Local Chinese automotive companies like BYD, FAW, and Chang’an are also starting to follow a similar strategy.

Ultimately, this shift will generate necessary revenue for continued investment in BEV research and development.

Between 2013 to 2015, foreign OEMs with their technological savviness are expected to bridge the existing electric car and technology gap through the localization of the HEV production line. Meanwhile, locals will attempt to develop their technical know-how on electric vehicles. This will help increase the HEV penetration in the public sector, bridging the HEV to BEV transition.

Consequently, 2015 to 2020 will be the time for PHEV development in China, if consumers find electric vehicles a convenient and trusted solution for the transition process. It will only be after 2020 that several factors will make mass production and market adoption of BEV successful.

Ensuring the ‘HEV-first’ strategy pushes the market to adopt BEV faster requires government intervention. While HEV seems like a quick win for OEMs in the short term, the Chinese government needs to facilitate its evolution with the necessary tools to achieve its emission and EV production targets by 2020.

Sitaresti Astarini is the regional executive for marketing communications at Solidiance, the Asia-focused growth strategy and B2B marketing consultancy firm specialising on clean technology, automotive/industrial application, technology, and healthcare. The author would like to thank Maryan Escarfullett for her support in developing this article.