A better way forward for elephant tourism in Thailand

Nothing completes a trip to Thailand like an elephant ride—not. Proven harmful to elephant health, such wildlife attractions are waning in popularity. Fortunately, there are kinder ways to interact with animals while on holiday.

Since Southeast Asia has risen in popularity as a tourist destination in the last decades, the tourism industry has been growing rapidly as well. Along the growth of the tourism, there are also environmental concerns and worries that the local culture might be swept away by the mass tourism.

While this is partly true, there is also a new consciousness and movement that promotes a sustainable way of exploring a country and a lot of progress has already been made to establish a more eco-friendly tourism industry.

Whereas tourists have often visited elephant riding farms in the past, there is now a new market for a more animal-friendly tourism industry.

In Chiang Mai, Thailand, a new model of tourism is emerging that is proving that it is possible to provide an engaging animal interaction experience for tourists in a way that is ethical, cruelty-free and economically sustainable.

An increasing number of sanctuaries are proving that elephants, instead of transporting tourists or other workloads, can live in their habitat freely while also bringing joy to tourists. But how? 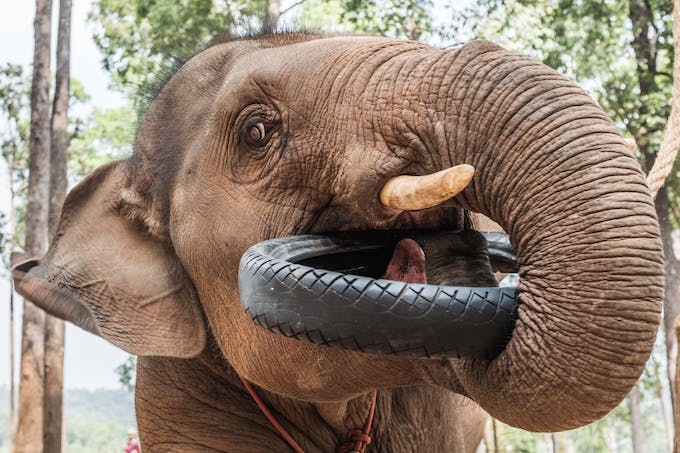 Elephants are an integral part of Thailand’s culture. In the early 20th century there were around 100,000 domesticated or captive elephants in Thailand. Those numbers went down to around 3,500 domesticated elephants, while it is said that there are only 1,000 wild elephants left.

The purpose of the elephants has undergone a heavy change as well. Where they used in the logging industry as workforce decades ago, domesticated elephants are now part of the entertainment and tourism industry.

The elephants at traditional camps are trained to perform tricks or let tourists ride on their back.

Needless to say, those aren’t natural behaviors and the elephants aren’t able to live their normal life. Although they seem to be very sturdy animals and look like they can handle the weight of humans easily, the riding and entertainment of tourists have negative health impacts. They stand on concrete floor, have to be trained to let tourists ride them and are often taken away from their mother way too young. Those elephants often have their will to be broken to follow the instructions of their trainer through violent practice.

Even though a selfie on the back of an elephant looks cute, it is really the result of years of mistreatment. Any traveler interested in ethical and cruelty-free experiences should not support those traditional camps and refrain from riding elephants.

Luckily, in recent times there has been a rise in alternatives to traditional camps which are more focused on letting the elephants live in their natural habitat, while the tourists can observe them.

These elephant sanctuaries, such as Elephant Jungle Paradise Park, started as projects to save elephants that have been mistreated at traditional camps in the past. They were dependent on donations and required dedicated effort from volunteers.

Over time, the sanctuaries became more creative in generating revenue to supplement donations.

In an effort to create more income, they opened their sanctuaries to tourists and let them witness the natural life of the elephants. Initially, it seemed like a risky endeavor due to the perception that tourists would prefer more exciting or adventurous experiences. But the sanctuaries’ offering has, over time,  risen steadily in popularity.

But what is the appeal of these sanctuaries to tourists?

An increasing number of sanctuaries are proving that elephants, instead of transporting tourists or other workloads, can live in their habitat freely while also bringing joy to tourists.

Well, first of all, it is very obvious that the elephants live a good life. Contrary to the riding industry, where they have to be obedient and are trained to follow orders, elephants in sanctuaries are energetic and playful and are able to run around freely.

A typical tour through a sanctuary starts with meeting the elephants in a safe enclosure, with a fence separating visitors and animals. After the initial greeting, the elephants usually get closer to the visitors, giving them a chance to pet and feed them. Once the elephants are fed, they usually wander off to the woods until the afternoon.

Then they meet the tourists again and take a mud-bath together.

Although the sanctuaries were at first very sceptical about whether tourists would be  interested in such a tour, recent development has shown that they easily can compete against traditional forms of tourism.

Of the $50 that a tourist has to pay for the sanctuary trip, half of it goes directly into the daily upkeep of the elephants, with food and medical care being the highest cost. The other half is used to run the sanctuary.

The elephant sanctuaries in Chiang Mai are a beautiful example that sustainable tourism doesn’t have to be boring, and disproves the fact that it cannot compete with traditional forms of tourism. In fact, there is a very high demand for these kinds of adventures.

With tourists becoming more aware of the negative impacts of traditional tourism, the demand for sustainable alternatives is rising.

Hopefully, the example of elephant sanctuaries will also influence other controversial tourist experience such as petting tigers, or kissing crocodiles, and help to find creative solutions to provide both a once-in-a-lifetime experience for visitors, as well as sustainable solutions for the local environment.

Sebastian Jacobitz is a hobby street photographer from Berlin.