Should the World Bank Group be held accountable when financial institutions it supports invest in projects that threaten forests and communities? Activists who traced the Group's links to projects like the Rampal coal power station say "Yes."

A coal boom in Asia could destroy any chances of meeting global climate goals, World Bank Group President Jim Yong Kim pronounced earlier this month at the Group’s annual meeting. “If all the new coal plants on the books earlier this year were constructed – especially in Asia – it would be impossible to stay below two degrees,” he said, referring to the temperature change target set in the Paris Agreement.

Slowing the growth of coal fired power plants is “perhaps the most urgent” task for global leaders trying to curb climate change, Kim said, emphasising the need for a “greener finance sector.” Since 2013, the World Bank Group limited its own financing of new coal projects to “rare circumstances.”

Meanwhile, according to a report led by US-based NGO Inclusive Development International, the Asian coal boom Kim describes as a “disaster” has been quietly enabled by the International Finance Corporation (IFC), the private sector arm of the World Bank Group.

After two years of sifting through a commercial banking database, researchers found the IFC has financial ties to 41 new coal projects launched since 2013.

It is a huge contradiction for the World Bank Group to pledge to stop funding coal projects, except in rare circumstances, and then funnel billions of dollars into commercial banks and funds that [are] among the leading financiers of new coal projects.

These projects include highly controversial power plants like the Mahan plant in India, the proposed Lanao Kauswagan power station in the Philippines and the Rampal coal plant in Bangladesh, each of which has prompted protests by local activists who fear the projects will cause severe environmental, social and human rights problems.

In each case, IFC provided multi-million dollar loans or investments to local banks and investment companies, who in turn put money into coal projects.

“It is a huge contradiction for the World Bank Group to pledge to stop funding coal projects, except in rare circumstances, and then funnel billions of dollars into commercial banks and funds that [are] among the leading financiers of new coal projects,” said David Pred, Inclusive Development International’s managing director, in an email to Mongabay.

“IFC has enormous influence over these banks and in many cases has representatives on their boards.  If IFC was serious about its commitment to ‘greening the financial sector’ and directing funds away from fossil fuels toward renewable energy, then it could simply put coal projects on its Exclusion List, alongside weapons manufacturing, tobacco and casinos.”

From 2011 to 2015, IFC poured around $40 billion into commercial banks and private equity funds around the world, the report notes.

Given the scope of this investment, researchers expected to find some controversial projects, said Kate Geary of the Bank Information Center, which participated in the report along with IDI and other human rights and environment NGOs.

Still, Geary told Mongabay she was surprised by both the number of IFC intermediaries that support coal plants and the social and environmental problems those projects have caused. “The shocking thing is the scale of the suffering these loans are causing,” Geary said. “They’re getting away with murder because it’s hidden.”

Where does responsibility lie?

The funds in question come via IFC ‘s “financial intermediaries”: banks and investment companies IFC invests in or loans money to. Those intermediaries in turn invest in or lend money to a wide array of companies and projects, including coal mines and power plants. 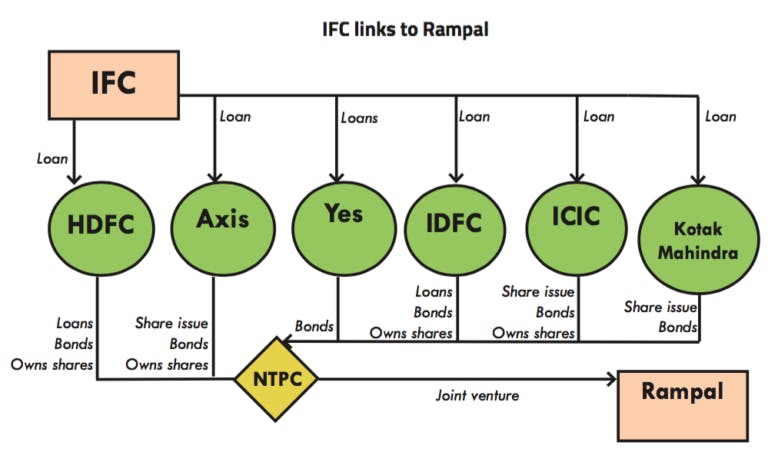 “Take the proposed Rampal coal project in Bangladesh, which threatens the Sundarbans, the world’s largest remaining mangrove forest,” Pred said. “Between 2005 and 2014, the IFC provided over half a billion dollars to six large Indian financial institutions. After receiving IFC funds, these banks went on to provide or arrange $7.5 billion in financing to the National Thermal Power Corporation, which co-owns the Rampal project along with dozens of other existing and pipeline coal projects in India.”

IFC spokesman Frederick Jones described its relationship with these banks and equity firms in a written statement to Mongabay: “IFC works through financial intermediaries to provide much-needed access to finance for millions of individuals and small businesses that it could not reach directly, as well as providing mortgages, insurance and digital financial services, promoting women-owned businesses and introducing environmental and social standards.”