‘Without a carbon cap, you can’t provide strong support for a carbon peak’

Provinces struggled to hit energy intensity and energy consumption targets in the last Five Year Plan, prompting debate about the suitability of these targets and calls for an absolute carbon cap.

Over the last 15 years, China’s “dual controls” – of energy intensity targets and caps on total energy consumption – have helped drive its energy transition and low-carbon development.

During the 2015-2020 period, China had a national target for a reduction in energy intensity of 15 per cent. The newest Five Year Plan outline, approved last week, targets a further 13.5 per cent cut by 2025.

Total energy consumption targets are due to be defined in the forthcoming Special 14th FYP for Energy Development. Once these national-level targets have been set, the National Development and Reform Commission (NDRC) will allocate specific targets to provincial-level governments to guide, and limit, their energy and development plans over the coming five years.

Late last year, several provinces were struggling to meet their targets, even more so than in previous years, with the difficulties exacerbated by Covid-19. Some provinces took the drastic measure of cutting off power to comply, prompting an examination of the efficacy of those targets.

“The quality of an energy system is determined primarily by its efficiency,” said Du Xiangwan, a member of the Chinese Academy of Engineering Sciences. He pointed out that while China’s energy intensity has declined since the implementation of the dual controls, it remains 50 per cent higher than the global average. If it could be reduced to match that average, China would save well over a billion tonnes of coal equivalent (tce) per year.

The Institute of Climate Change and Sustainable Development at Tsinghua University estimates that energy intensity would have to be reduced by 14 per cent between 2020 and 2025 to put China on course to reach peak carbon in 2030.

The latest Five Year Plan (FYP) sets the slightly less ambitious target of 13.5 per cent. How the economy develops will be relevant. Energy intensity targets have typically been linked to economic growth, and the latest FYP is the first without an economic growth target.

But mainstream expectation among economists is of growth at a rate of 5.5–6 per cent per year over the next five years, Zou Ji, president and CEO of the Energy Foundation China, told China Dialogue.

“The pandemic has added a lot of complexity and uncertainty to GDP, and international factors may also affect China’s economy. So I think China has left itself a bit of room for manoeuvre,” Zou said. 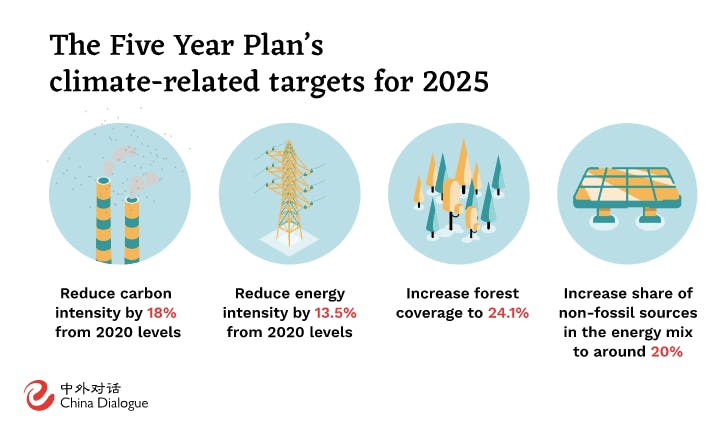 Zou pointed out that China’s carbon emissions are trending towards a plateau, and energy intensity targets have a big role to play during this pre-peak stage. “Currently, fossil fuels account for over 80 per cent of all energy consumption, creating huge emissions. So the two energy targets and controls on greenhouse gases, including carbon dioxide, are still linked. There is a strong positive correlation between energy use and carbon emissions.”

The big “energy provinces” account for 20 per cent of national carbon emissions and their emissions continue to rise. Zou thinks it is necessary to decouple emissions and economic growth in these regions, which include Inner Mongolia, Xinjiang and Gansu, with strict controls on energy intensity to force structural change and innovation. “If they can diversify their economies and end reliance on coal, energy intensity will drop, and local economies will modernise.”

No energy cap set so far

The energy cap, the other half of those dual controls, does not appear in the 14th FYP outline but is expected to be part of the Special 14th FYP for Energy Development. Experts are calling for a cap of 5.5 billion tce or below.

However, the idea of an energy cap may need more work. “Currently, 15 per cent of our total energy consumption comes from non-fossil sources. We should be encouraging the development of these renewables, not restricting them. It is the polluting, high-carbon fossil fuels, and particularly coal, that we need to control,” said Yang Fuqiang, a researcher at Peking University’s Institute of Energy.

The 14th FYP outline does partially speak to Yang’s concerns. It says the dual control system will be improved to focus on fossil fuel consumption. Zou Ji told China Dialogue that in the future renewables may be exempt from energy caps.

Many Chinese provinces struggled to achieve their energy intensity and consumption targets set in the last Five Year Plan. The targets were hugely restrictive to many of the big “energy provinces”.

Energy intensity targets for the 11th and 12th FYP periods were reached, if not surpassed. According to the 13th FYP for Energy-saving and Emissions-reduction, energy intensity should have fallen 15 per cent (between 2015 and 2020) and total energy consumption should have been no more than 5 billion tce per year. Those overall targets informed the provincial-level targets set by the NDRC, which regularly checked implementation.

The recently published 2020 statistical yearbook shows that the energy consumption target was achieved at the national level, if not always provincially.

So far, there has been no official announcement on whether the energy intensity target has been met. But experts, drawing on the official information available, have told China Dialogue that the target may have been missed, with the pandemic likely playing a role.

During implementation checks in 2017, Ningxia, Xinjiang and Liaoning were not on track to meet either target, and in 2019 Inner Mongolia was also lagging. The situation escalated during the first three quarters of 2020 when over one-third of all provinces ended up missing their target.

So, what went wrong?

In interviews with China Energy News, sources close to development and reform committees in Inner Mongolia and Shaanxi blamed the failures on overly rapid approvals of too many energy-hungry projects. Those provinces have access to cheap coal, and are happy to use more energy rather than increase efficiency. These relatively undeveloped regions have high proportions of heavy and chemical industries and have been trying to attract energy-hungry industries unwelcome in China’s more developed east.

Some provinces have suggested changing how energy targets are allocated, so differences in regional development, industrial structure and the locations of major projects are taken into account. They suggest that if certain energy-intensive projects are planned for their provinces by the central government, to serve the needs of the whole country, then the energy use of those “national-interest” projects should not occupy their provincial quotas.

The big energy provinces share several problems in common, relating to industrial and energy structure, which is exactly what the energy controls are designed to improve. One of the experts interviewed by China Energy News believes there is no need to change the targets simply because some provinces have failed to meet them.

Zou Ji says those provinces need more diverse sources of energy, rather than relying solely on local coal mines, and should shift rapidly from fossil fuels to renewables.

There are large expanses of desert that could be used for solar and wind power generation. Hydropower could also add to the mix of reliable energy that would allow exports of electricity to the east of China to continue, but with lower carbon emissions involved.

In situations where energy intensity targets have been met but rapid economic development has led to total energy consumption targets being missed, there is a case to be made for flexibility. Late last year, in a desperate move to reach its energy consumption control target, Zhejiang greatly inconvenienced its residents by restricting power use.

One solution would be to permit the increase of renewables output, while restricting coal power generation, said Yang Fuqiang. He also referred to long-standing problems with getting renewable energy onto the grid in the west of China.

In cases where western provinces host energy-hungry industries relocating from the east, using local renewable energy could be a condition of entry. Not only would that provide economic growth and shift the energy mix, it would also provide a case for exemption from energy caps.

Zhang Shuwei, director of the Draworld Environmental Research Centre, thinks government intervention to control energy consumption risks breaking the energy market and distorting price signals. The NDRC’s handing down of energy caps risks those targets being missed or too rigidly implemented (as was the case in Zhejiang).

The ability to adjust consumption varies hugely across provinces, and it is unrealistic to think officials will have the information they need, or the necessary political wisdom, to make optimal allocations.

Going beyond energy intensity and consumption

Hu Min, a consultant with the Innovative Green Development Program, goes further, calling for a shift from energy caps to carbon caps. She says energy use is itself a human right. “Although China’s Energy-Saving Law provides a legal basis for controlling energy consumption, common sense tells us we shouldn’t limit how much energy a person can use.”

According to Hu: “Excessive controls on energy use will affect people’s livelihoods, and it is vulnerable populations that suffer most when restrictions are put in place, as in Zhejiang.” For her, a carbon cap would be more scientific: “Carbon emissions are pollution, an externality. Carbon caps are entirely reasonable, and have a well-accepted legal foundation around the world.”

But one expert says that energy controls are still a practical method to drive China’s ongoing low-carbon transition. Song Ranping, developing country climate action manager with the World Resources Institute, told China Dialogue that since the 11th FYP, when energy-savings and emissions-reductions were first included in the FYPs, Chinese provinces have set up regulatory offices to audit the energy consumption figures submitted by businesses. Song said that while discrepancies and issues remain, China does now have a developed system for the monitoring, reporting and verification (MRV) of energy use.

This stands in contrast to the MRV system for carbon emissions, where verification only takes place in cities that have established a carbon trading system. Trials of those markets only started in 2011, in eight cities, and a national carbon market is only just getting started. Also, the release of carbon emission data is often very slow.

“If we want to use carbon emissions data to track targets, it needs to be prompt, transparent and frequent to ensure accuracy. The National Greenhouse Gas Emissions Inventory is currently six years behind, with similar lags in provincial inventories, and no regular publishing schedule,” said Song.

Both energy- and carbon-intensity targets are essentially targets for efficiency. If it is to achieve carbon neutrality and help the world achieve the aims of the Paris Agreement, China needs a quick peak and then fall in absolute carbon emissions. Before the 14th FYP was published, a number of experts suggested a total carbon emissions cap, but there is no sign of one in the most recent plan.

Zou Ji is concerned about how the country can ensure rising emissions slow down and peak without the setting of carbon emission targets. He has stressed before that China has less than a decade before planned peak carbon in 2030, yet does not have a complete system for managing emissions. The capacities necessary for such a system will take at least three to five years to develop.

“I think that without a carbon cap, you can’t provide strong support for a carbon peak. And the credibility of our assessments of progress towards that carbon peak will suffer, both at home and abroad, if we aren’t managing total carbon emissions well. Perhaps a more manageable objective would be to set total emissions targets for key provinces or industries – that would be of some help.”