‘Windows of Hope’: a glimpse of life without clean water

To mark World Water Day on March 22, a Singapore-based non-profit has staged a virtual reality exhibition which takes the viewer to remote villages in Cambodia and Myanmar where people still depend on polluted water to meet their daily needs.

Villagers in Preaek Chrey Village, Kandal Province in Cambodia mostly rely on dirty river water or rainwater for drinking, cooking and washing as they spend an average of 25 to 40 minutes preparing water for filtering and boiling before it is ready to drink.

They do not have much choice as the only alternative source of clean water is imported bottled water sold by a private company in Vietnam, which costs up to KHR 3,000 per bottle (US$0.75).

As one of the communities among the 200 million people in Asia who lack access to clean water, this Cambodian village is one of those featured in “Windows of Hope”, a roving exhibition organised by Singapore-based non-profit organisation Lien AID that runs from 20 March to 8 April, starting at the Somerset Atrium Space in Singapore. 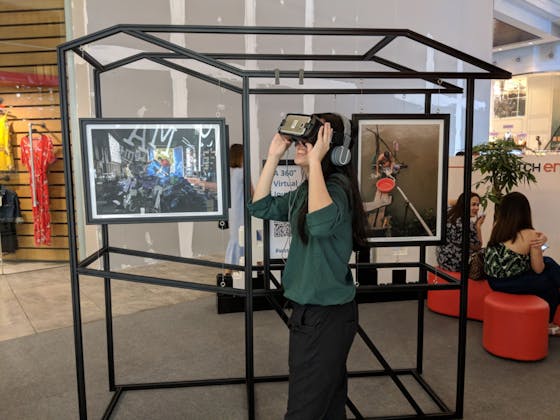 A participant uses virtual reality technology to take a peek at a world with little access to water in the “Windows of Hope” exhibition. Image: Lien AID

Using virtual reality (VR) technology and photography displays, the exhibition will be held at three venues in Singapore, in a bid to highlight the water challenges of the region’s rural poor. 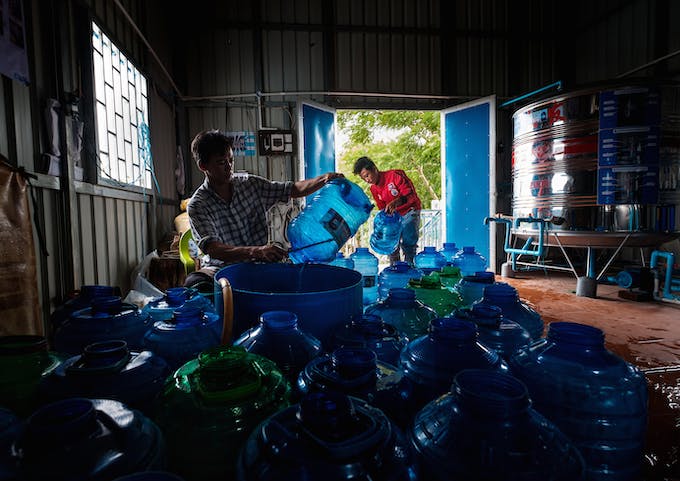 Water is cleaned and treated in a water treatment plant in Cambodia. Image: Lien AID

As part of its outreach efforts, Lien AID set up a water treatment and bottling plant in the 3,624-strong village to help curb the problem.

To ensure that the plant is sustained by the community, the organisation appointed a water entrepreneur or someone from the community who is trained in basic rural water management and business skills, who will maintain the water treatment and bottling plant, which provides access to clean, treated drinking water for surrounding villages in the commune.

Simple, corrugated metal-clad structures are built on concrete stilt platforms to house the water treatment system and provide space for the cleaning of the bottles.

Despite rapid advancement in developed countries in Asia, millions of people living in rural communities still lack access to clean water and sanitation, putting them at risk of early death, disease, and entrenched poverty.

Clean, treated drinking water is sold in 20-litre bottles easily transported by boat, bike, motorcycle, or wooden cart. The bottles are brought back to the plant to be washed and refilled.

Besides building the sustainable water plant system, the organisation has trained local government agencies in basic rural water management so that they can regulate the provision of water services in the area.

According to Lien AID, this initiative has been replicated in 75 more projects in villages around Cambodia.

In 2016, it launched a clean water project in Tetma village, Mandalay region, Myanmar. Previously, families had to walk for up to an hour to fetch eight to 10 gallons of clean water from a well for personal use and the production of jaggery (honey and candy) for trade, which is dependent a steady water supply. Lein AID set up a gravity-fed piped system that distributed water from an existing tube well to shared water points in the village.

Last year, the non-profit launched pilot initiatives in five Burmese towns in the Ayeyarwady region, that included the construction and improvement of water infrastructure, which gave access to clean water to 3,866 villagers. Community workshops on basic rural water management and hygiene were launched to ensure the sustainability of the project. 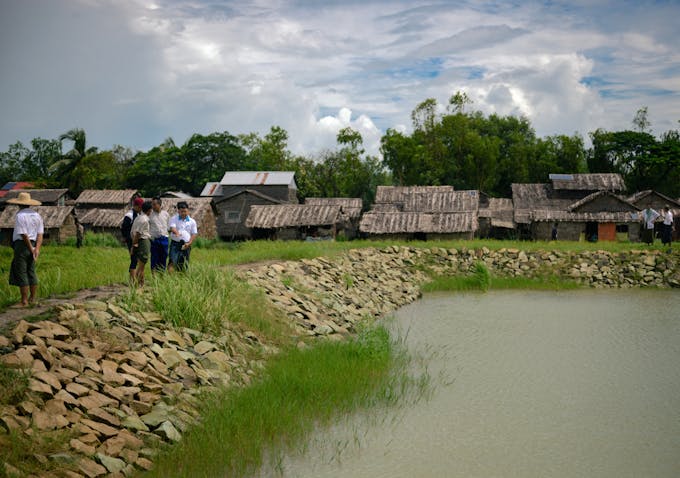 A village pond in Myanmar is rehabilitated to give access to clean water to the villagers. Image: Lien AID

The 2030 WASH goals are part of the United Nations’ Sustainable Development goal 6, which focuses on providing clean water and sanitation for all by 2030.

“We also hope to focus more on public education and advocacy campaigns in the countries we work in, so as to galvanise governments, communities and business to take action to accelerate safe WASH access,” Koh added.

Lien AID launched “Windows of Hope” last year and brought it to various corporations in Singapore. For the first time, it is opening it up to the public when it runs from March 20 to 21 at 313@Somerset Atrium Space, March 22 to 23 at the Ocean Financial Centre Open Space and on April 2 to 8 at the Star Vista B1 Atrium.