In 2018, humanity will pump more carbon dioxide into the atmosphere than ever, and yet last year was a record year for renewable energy. What gives?

“There is a big disconnect between the [emissions reduction] targets that have been set [to meet the Paris Agreement on climate change], and what is happening in real life,” said Dr Fatih Birol, executive director of the International Energy Agency at Singapore International Energy Week on Tuesday.

Birol, whose employer has often been criticised by environmentalists for downplaying the rise of renewables, said that although 2017 was a recordbreaking year for renewable energy installations, it was a bad year for an important weapon in the fight against climate change—energy efficiency.

“We can’t fix the problem [of rising climate-changing emissions] with renewables alone,” he said.

The use of coal—a cheap, abundant but dirty and inefficient source of fuel—has continued to rise, particularly in developing Asia where consumption is growing by 3.1 per cent a year.

There is a big disconnect between the [emissions reduction] targets that have been set [to meet the Paris Agreement on climate change], and what is actually happening in real life.

Meanwhile in the United States, the world’s second largest carbon emitter, the replacement of coal with less polluting natural gas has been “less impressive” in 2018 than last year, Birol noted. 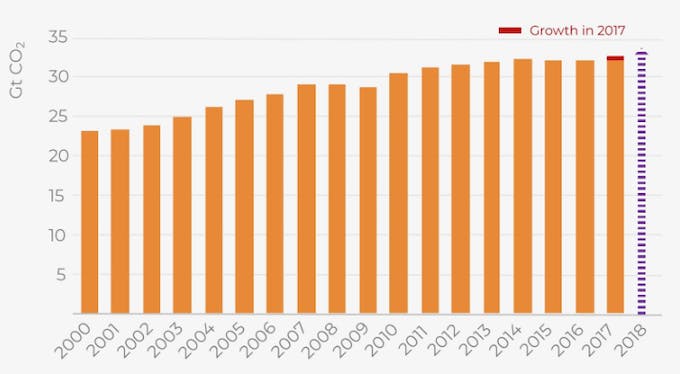 He pointed to data showing that global energy-related carbon emissions have grown steadily since 2000, and the only major drop came in 2009—the year of the global financial crisis. Emissions flattened from 2014 to 2016, but started to rise again in 2017. This year, a new record will be set for emissions.

He said that fossil fuels accounted for 81 per cent share of the world’s energy consumption 30 years ago, and have exactly the same share of the energy mix now, despite the rise of renewables. This is because overall demand for energy has soared to power a human population increasing by 83 million people a year.

Southeast Asia’s energy demand has grown by 60 per cent over the past 15 years, and IEA expects its energy demand to grow by almost two thirds by 2040—by which time the region’s main source of fuel will still be coal, the single biggest contributer to greenhouse gas emissions.

Over the next 20 years, Association of Southeast Asian Nations (Asean) countries will build new power plants equivalent to the capacity of Japan and South Korea, Birol noted, adding that the region’s desire to keep cool was the biggest driver of this demand.

“One of the biggest blind spots of the global energy market is air conditioning,” he said. Asean’s demand for cooling technologies is projected to account for 40 per cent of the region’s total electricity demand by 2040.

What to do about the climate crisis?

Birol said that to tackle the climate crisis more renewables, greater energy efficiency and carbon capture on a massive scale was needed.

Carbon capture and storage technology sucks carbon dioxide out of the atmosphere and stores it, although it is expensive and has yet to be tested and deployed at scale. The technology was mooted as a necessary tool for fighting climate change after the release of a report last month from the Intergovernmental Panel on Climate Change found that the world has just 12 years to dramatically reduce emissions or face dire consequences from extreme weather and rising sea levels.

The faster countries put a price on carbon, the faster decarbonisation can happen.

Birol also suggested that in some countries nuclear power would be needed to achieve deep decarbonisation, as despite the risks shown by the Fukushima disaster in 2011, nuclear can provide reliable low-carbon energy at scale.

John Abbott, downstream director for Shell, the world’s largest oil company, said that pricing carbon would be the most effective way for the world to decarbonise.

“The faster countries put a price on carbon, the faster decarbonisation can happen,” Abbott said.

One solution would be to introduce a regional or global price on carbon, but Birol said he couldn’t see that happening “in today’s context.” With carbon pricing, “no one size fits all,” he said.

To date, 46 national schemes have been put in place to price carbon, accounting for 20 per cent of global emissions.