Where will you be when the sea rises?

It is not a matter of if, but when the seas rise and submerge many coastal cities. Jeff Goodell, author of The Water Will Come, tells Eco-Business how well prepared cities are for rising seas, how to argue with climate deniers, and what sort of review he thinks Donald Trump would give his book.

Sea-level rise is not the stuff of science fiction or Hollywood movies like The Day After Tomorrow. It is happening, says Jeff Goodell, an American investigative journalist, climate change expert and author of the book The Water Will Come: Rising Seas, Sinking Cities and the Reshaping of the Civilized World. 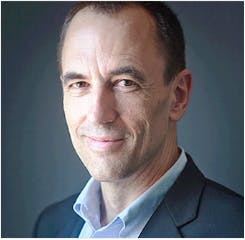 “Due to the amount of heat that is already built up in the world’s oceans, a certain amount of sea level rise is inevitable. And it’s why my book is titled The Water Will Come, not The Water Will Come Unless We All Install Solar Panels on Our Roofs,” he tells Eco-Business.

To research his book, Goodell has travelled to Alaska with former US President Barack Obama, and has been around the globe interviewing scientists and climate change leaders to investigate how climate change and resultant rising sea levels will impact humanity.

The rising seas does not make reducing greenhouse gas emissions pointless, he argues. “The quicker we reduce greenhouse gases, the less the planet will warm, and that will have a big impact both on the height and trajectory of sea level rise we will see in coming decades,” says Goodell, who will be talking at the Singapore Writers Festival at the Victoria Theatre on Sunday.

In this interview with Eco-Business, Goodell talks about his reaction to the latest report from the Intergovernmental Panel on Climate Change, the best way to argue with climate change deniers, and what sort of review he thinks United States President Donald Trump would give his book.

What were your first thoughts when you read the IPCC latest report that finds that we have passed the point of return on global warming?

First, let me argue with the premise of your question. The IPCC report did NOT say we are past the point of no return. To greatly oversimplify, it said that if we want to avoid dangerous climate change, the world needs to go to zero carbon emissions by no later than 2050. The report was remarkable in its clarity and bluntness, but not really surprising to anyone who has been paying attention to what climate scientists have been telling us for years.

Some argue that sea-level rise is inevitable whether we slow global warming or not, so there’s no point trying to curb greenhouse gas emissions. What’s your take on this argument? 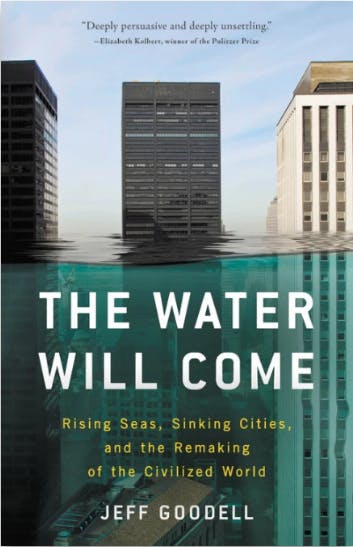 Goodell’s book, The Water Will Come

Due to the amount of heat that is already built up in the world’s oceans, a certain amount of sea level rise is inevitable, that’s true. And it’s why my book is titled The Water Will Come, not The Water Will Come Unless We All Install Solar Panels on Our Roofs. But that does NOT mean that curbing greenhouse gas emissions is pointless. The quicker we reduce greenhouse gases, the less the planet will warm, and that will have a big impact both on the height and trajectory of sea level rise we will see in coming decades.

Some of the cities most at threat from sea-level rises, such as Shanghai and Osaka, have put measures in place to protect themselves, such as deep-water drainage systems and flood prevention walls. Are they doing enough?

No, it’s not enough. But it’s a start. But higher sea walls and better drainage are just a temporary fix. In the long run (and by that I don’t mean centuries, but a few decades) dealing with sea level rise will require relocating cities to higher ground and rethinking our relationship with water. Or as they put it in the Netherlands, “living with water”.

Which of the cities you’ve visited are the most sea-level rise ready, and which aren’t?

I wouldn’t say any city I visited was sea level rise ready. Certainly city officials in Rotterdam have given a lot of thought to how they deal with water, but even Rotterdam is not ready for what’s coming. The cities that are best prepared for sea level rise are the ones that are naturally located on high ground.

There’s talk of undersea walls and artificial islands to stop the polar ice caps from melting so fast. Madness or a good idea? Which of the strategies to mitigate sea level rising you’ve heard makes the most sense to you?

Madness, for sure. The best (and likely the only) strategy to mitigate sea level rise is reducing greenhouse gas emissions as quickly as possible. Everything else is a form of magical thinking.

Southeast Asia is one of the last places on the planet where major coal-fired power plants continue to be built. What do you say to the investors who are putting money into these projects?

Solar energy is cheaper, cleaner, and more profitable. And it will create a better future for your kids and mine.

What are the biggest lies you’ve heard about climate change, and what in your view is the best way to counter arguments that dispute what science is telling us?

There are so many. The biggest lie is that climate change is some sort of deliberate hoax, perpetuated by…well, name your bad guy. Or that climate scientists are somehow profiting from drawing attention to the risks of climate change. Or that replacing fossil fuels with clean energy will hurt a nation’s economy. These lies all have a life of their own, and for some people, I’m not sure they will ever die.

What insight do you have into why people deny climate change, and continue to do so in the face of mounting evidence?

There are a lot of different reasons. Some people just don’t think about it. They have busy lives, and don’t have the time or inclination to look beyond their immediate problems. Some people are conned by the disinformation campaigns of fossil fuel companies. Some people believe man-made climate change goes against their religious principles. Some think the consequences of climate change are so overwhelming that it’s easier just to push it out of their minds. I understand that. What I don’t understand is people who say, “Who cares about climate change? By the time it happens, I’ll be dead.”

Human beings find it hard to imagine far beyond their immediate future. What in your view is the most powerful way to show people what the future will hold in a world of rising sea levels and the consequences that will bring?

Visit Miami Beach during king tides. Or the Marshall Islands. Or Jakarta. You will see, right now, in real time, the consequences of rising seas. As the science fiction writer William Gibson observed, “The future is already here – it’s just not evenly distributed.” 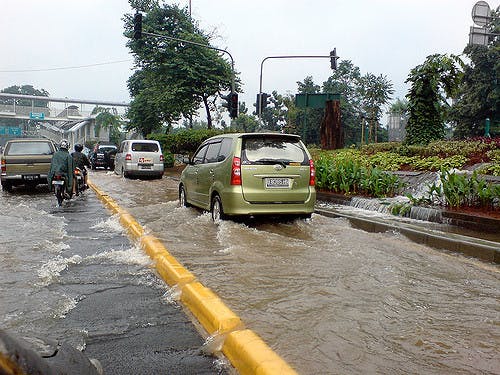 What sort of book review do you think Donald Trump would give The Water Will Come?

I’m not convinced Donald Trump can read, so it’s probably a moot question.

Which film or piece of art do you think most accurately depicts the future of the world as you see it, Bladerunner, Waterworld, Mad Max, Terminator 2 or The Day After Tomorrow?

The best fictional depiction I know of is in Kim Stanley Robinson’s novel New York 2140. In it, Manhattan is flooded, and Denver has replaced New York as the centre of culture and finance. Lower Manhattan is known as “SuperVenice,” and some of the flooded buildings have become hangouts for struggling artists and criminals. It’s all very vivid, very matter-of-fact, and very believable.

If you were to live until 2100, where you would most want to live, and where would you least like to live?

Jeff Goodell will be speaking at the Singapore Writers Festival 2018 on 11 November.