'We will not be sacrificed': Yolanda survivors to Trump, Bonn negotiators

With the UN climate talks underway in Bonn and as the Philippines prepares for US President Donald Trump’s visit, cries for climate justice continue from survivors of typhoon Yolanda.

A day before the fourth anniversary of typhoon Yolanda, and as the latest global negotiations on climate change—known as COP23—proceed in Bonn, Germany, some 500 youth and community members in Tacloban City, Philippines staged a visual protest calling for climate justice.

The demonstration was not only for Tacloban, the city ravaged by the typhoon—the strongest storm ever to make landfall—but for people all over the world where extreme weather events are becoming the new normal as a result of climate change.

Spearheaded by Greenpeace Southeast Asia, young people formed the shape of the eye of the storm and the sun, which symbolises global warming and its devastating consequences.

The protest aims to bring to the world stage the people of the Philippines’ cry for climate justice. 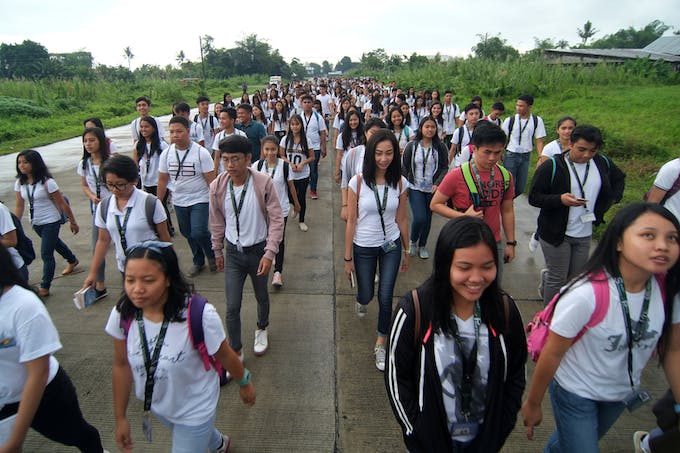 Yolanda, internationally known as Haiyan, was a super typhoon that packed 300 km/h winds and a 7.5 metre storm surge that wreaked havoc on Tacloban City and nearby towns in the province of Leyte in 2013. In its aftermath, the official death toll was reported at 6,239. Homes and buildings were levelled, displacing millions.

The Yolanda survivors want to send the same message to US President Donald Trump, who is visiting the Philippines on November 12 to 13 for the Association of Southeast Asian Nations (ASEAN) summit. Trump has vowed to pull the US out of the Paris Agreement. Now, the US is the only country in the world that has not ratified the climate accord, after Syria signed the Agreement in Bonn yesterday.

Yeb Saño, executive director of Greenpeace Southeast Asia, whose family is from Eastern Visayas, the province hardest hit by Yolanda, said that this year’s spate of extreme weather events is a clear signal to governments and corporations that they must step up action on climate change.

“Government delegations meeting in Bonn must stand up and propel climate action forward or be held accountable for their inaction,” he said.

Trump, who continues to back fossil fuels in the US, must listen to the world and keep these polluting energy sources in the ground, Saño said.

“We cannot just continue asking for assistance and relying on our people’s ‘resilience’, we need commitment from those most responsible that they will not cause further harm to the climate and people,” Saño told Eco-Business in an interview.

Government delegations meeting in Bonn must stand up and propel climate action forward or be held accountable for their inaction.

‘We will not be sacrificed’

Among those Yolanda survivors crying for climate justice is 26-year-old Joanna Sustento who along with her brother, lost her whole family and home to the storm.

In just two hours, Tacloban was “wiped off the map,” Sustento said, describing a storm the like of which had never before been known to the Waray-Waray or local people of her town.

Literally, waray-waray means “it’s nothing,” an expression of defiance that has defined the Taclobanons’ spirit amid natural disasters that regularly visit their coastal town. 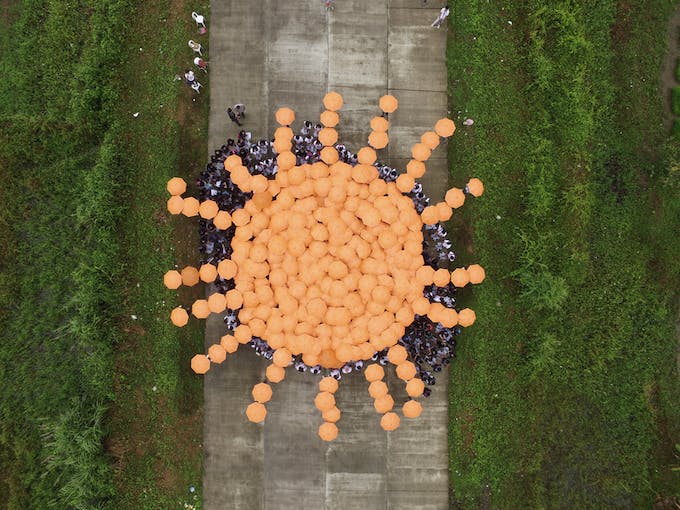 Forming the image of the sun, to symbolise global warming. Image: Derek Delgado/Greenpeace

But this changed on November 8, 2013. In the aftermath of Yolanda, people knew that they could no longer rely solely on their resilience, and that the words “climate change” meant the need to change mindsets about its threat to humanity.

“Climate change is about surviving not just the storm, but surviving the grief and the loss it causes. It’s about forcing yourself to wake up every day despite knowing that your parents are gone, your brothers and sisters are gone, and your home is gone,” she said.

In 2015, Filipino typhoon survivors, other communities suffering the impacts of climate change, and civil society organisations, including Greenpeace Southeast Asia, filed a petition with the Commission on Human Rights (CHR) in the Philippines to investigate the responsibility of major fossil fuel companies for climate-related human rights harms.

The Commission has called on 46 carbon producers, including ExxonMobil, Shell, BP, Chevron, Total, BHP Billiton, Suncor, and ConocoPhillips, to show up at the first meeting with the petitioners on December 11 this year, in what is now the world’s first-ever inquiry into human rights violations caused by big carbon polluters.

These companies are among those identified by a CDP report released in July that showed that just 100 companies are the source of over 70 per cent global emissions.

“The science has never been clearer, and it points to the fact that just 100 entities are responsible for the lion’s share of carbon emissions that have caused climate disruption,” Saño said.

Saño, who visited Yolanda’s “ground zero” in Tacloban yesterday, said that four years after the tragedy, he has witnessed a gradual return to “normal” among the residents. 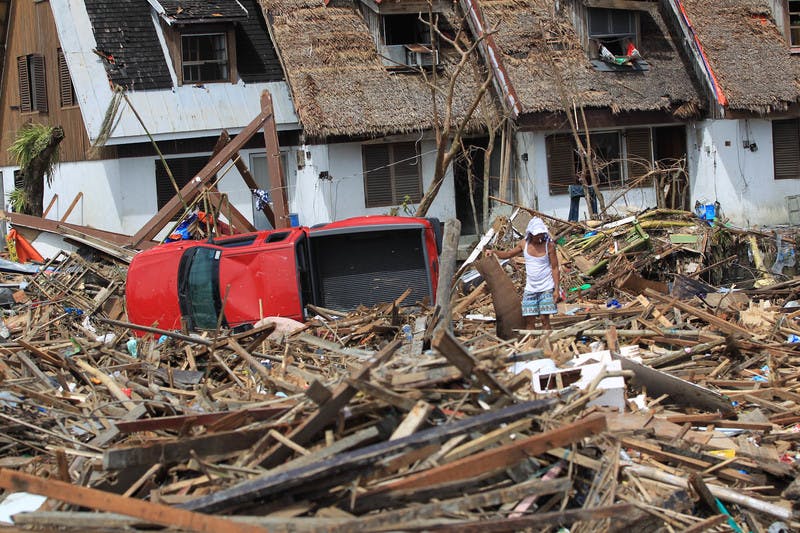 There are some good signs that the local government is taking a more sustainable path by integrating climate change into its programs, and community members and youth are more mindful now of the importance of environmental protection as a means of defence against future climate impacts. But many in Tacloban, and in the Philippines as whole, remain economically marginalised, especially as companies destroy the environment to pursue growth, he said.

“Vulnerability to disasters is not merely a function of physical hazards and threats, but of people’s state of development. The more inequity there is in the community, the more vulnerable people are on the margins. Have we addressed the plight of those on the margins? The answer is ‘no,’” Saño said.

The fight for climate justice

Gradually, Taclobanons are becoming aware of the need for climate mitigation, and are putting more pressure on policymakers.

“These people have given us a peek into how challenges can be transformed into opportunities, whether it is the adoption of solar power, projects to reduce solid waste, or city-wide disaster preparedness and planning.”

While the world has made giant strides in the international political process that seeks to address climate change, including the adoption of the Paris Agreement, and serve justice to those suffering its consequences like the people of Tacloban, Greenpeace is calling for governments to step up climate action. 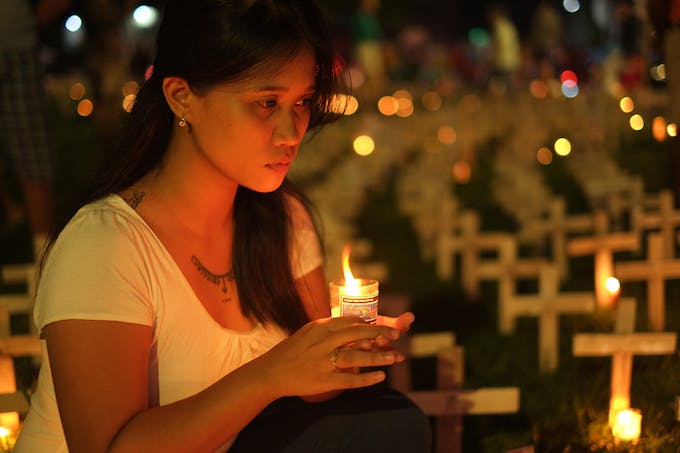 “Negotiators in Bonn must understand that the world is clamouring for bolder walking to live up to all the talking. We will keep reminding the world about Yolanda and amplify the voices of the survivors,” Saño said.

Sustento may have lost her family and home to the tragedy, but she has gained a powerful story to tell the world.

“This is the reality we are living in. I hope they listen to our stories. Four years have passed since the tragedy, and yet the unspeakable pain from the loss remains,” she said.