Urban development and the environment: An interview with Mayor Herbert Bautista

Mayor Herbert Bautista of Quezon City is a professional actor and political leader. Despite being one of the youngest mayors in the Philippines, he has acquired considerable experience in government.

A former youth and community leader, he was also the vice mayor for 12 years before winning the mayoral election in 2010. Mayor Bautista’s urban development framework is anchored on environmental management – for which he is known as an advocate – and disaster-risk reduction. Under his leadership, Quezon City has become a pioneer city in the Philippines in implementing sustainable environmental and climate change measures.

You are one of the youngest mayors in the Philippines, but already have many years of experience in the government. What made you want to go into public service?

As a young actor, my early exposure to the performing arts exposed me to the limelight. I was given the rare opportunity to see, experience and internalise the many roles I played for the camera. The social realities that stared at me and the popularity that I gained as an actor prodded me to step up to the plate and present myself as an alternative youth and community leader. My initial entry into politics was to advocate for the cause of the youth. However, as I matured in politics, my advocacies have turned from the youth, to the environment, to integrative urban planning and a host of other issues and concerns that relate to urban and civil governance.

My stint in public service began in 1985 when I was elected National President of the Kabataang Barangay (Youth Assembly). I continued in that capacity until the 1986 People Power uprising. Under the administration of that period, I was appointed to the Quezon City Council, in an ex-officio capacity, representing the youth sector. Eventually, I became an elected Councillor (1988 – 1995), Vice Mayor (1995 – 1998; 2001 – 2010) and currently Mayor of Quezon City.

The Philippines constantly faces the risk of earthquakes. How does Quezon City address this through its urban programme?

Quezon City’s Comprehensive Land Use Plan, institutionalised through an ordinance enacted in 2011, provides the physical framework of development of the city that reconciles the thrusts of city liveability and economic resilience with disaster risk mitigation. It delineates and defines the various growth areas, while also limiting developments in areas which have high disaster-risk potential.

I have constituted a multi- department task force that accurately marks the path of the West Valley fault-line in Quezon City, and clearly identifies those properties within the danger areas. In 2011, the task force began the tagging, marking and installation of physical markers on the fault-line. We have also conducted trenching activities to more accurately study the impact of ground displacement and determine ground displacement.

This buffer zone shall be developed as linear parks or areas for laboratories dedicated to studying earth movements and disaster mitigation measures.

I have declared those areas within the seven-kilometre stretch of the fault-line as a danger zone, with no new structures allowed within the five-metre borders of this fault-line. Those with residences and other structures there have been advised to move out. This buffer zone shall be developed as linear parks or areas for laboratories dedicated to studying earth movements and disaster mitigation measures. These measures are in addition to earthquake preparedness drills conducted in schools, offices, malls and other public places.

You participated in the inaugural Temasek Foundation Leaders in Urban Governance Programme, and the World Cities Summit 2012 in Singapore. What did you learn during this visit that may be useful to Quezon City?

I have come to the realisation that the daunting task of managing a developing and evolving city is not actually difficult. It requires strong political will, a forward looking and long term strategic plan with identifiable key results to determine whether or not a city has reached its targets. The task of running a city does not revolve around one person only. Ultimately, it requires the participation of the whole governance team, from the department managers to the last labourer. Completing the tapestry of our vision for a progressive city demands nothing less than the full cooperation of the governance team and its customers, the citizens.

What are your priority issues and future plans for Quezon City as it grows?

I would like Quezon City to take advantage of the positive global perception that the Philippines now enjoys. We see this translating into sustained growth in the business process outsourcing industry, the continued expansion of the health and wellness industry, the wide-scale growth of environment-based industries, and aggressive promotion of local tourism.

Quezon City has allocated 113.89 hectares of its available land for development of information technology parks and buildings. The robust influx of investors in Quezon City shows that we must expand these areas even further. Our city also has the highest concentration of hospitals in the Philippines, with the biggest bed capacity. We are leveraging this to develop medical tourism.

We further seek to expand the manufacturing base in the city, which at present is rather small. For one, we are looking at becoming a centre of environmental product know-how in the Philippines, by encouraging the influx of producers of such products as solar panels; light- emitting diode or LED lights; construction materials made out of recycled resources; as well as the manufacturing and assembly of electric vehicles.

We expect these industries to generate the jobs, supplier and subcontracting arrangements, and training programmes that will enable economic gains to filter down to our marginalised population.

What is your favourite place in your city and why?

My favourite place in Quezon City is the Quezon Memorial Circle, because of its historical roots and lush greenery. It is a 25-hectare park that contains the shrine of the city’s founder, Manuel L. Quezon, who was also the first president of the Philippine Commonwealth. In the original master plan of the city, it was designed to be the city’s central park, the crux of the city’s extensive parks system.

Urban Solutions is aimed at mayors, urban experts and practitioners. If there is one message you can give to the leaders of the cities around the world, what would it be?

The most resilient foundations for growth for any city would be economic sustainability and its ability to prepare well for disasters. That is why these two are the key anchors of Quezon City’s development. 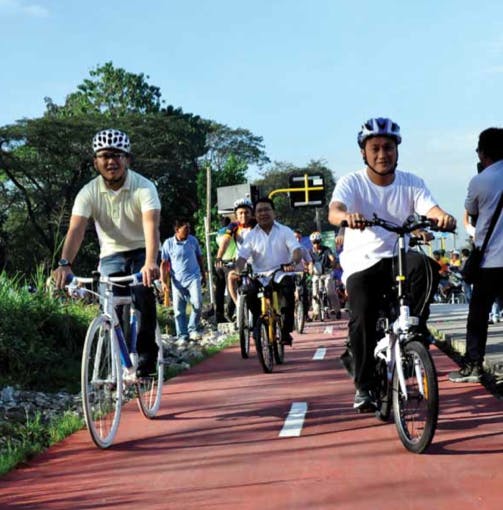 Urban Solutions is an international magazine published by the Centre for Liveable Cities Singapore targeting mayors and related urban experts and practitioners.