Tropical forests are ‘no longer carbon sinks’ because of human activity

Tropical forests now emit more carbon than they are able to absorb from the atmosphere as a result of the dual effects of deforestation and land degradation, a new study says.

A new research challenges the long-held belief that forests act as “carbon sinks” by storing more carbon than they emit due to natural processes and human activity.

Instead, the world’s tropical forests could have experienced a net loss of around 425m tonnes of carbon from 2003 to 2014, the lead author tells Carbon Brief. This figure is considerably higher than previous estimates of carbon loss from tropical forests.

The findings suggest that curbing deforestation and protecting existing forests could be instrumental in removing greenhouse gases from the atmosphere and fighting future climate change, he adds.

Tropical forests are capable of storing large amounts of carbon. This is because trees absorb carbon from the atmosphere during photosynthesis and then use it to build new leaves, shoots and roots.

However, forests can also release carbon into the atmosphere. Some of this release is through natural processes such as plant respiration, droughts and wildfires. But emissions can be heightened further by human activities, such as deforestation and illegal logging.

Calculating the balance between the uptake and release of carbon allows scientists to determine whether tropical forests are a “carbon sink”, meaning they take in more carbon than they release, or a “carbon source”, meaning their carbon emissions exceed their intake.

For decades, the consensus has been that tropical forests are a moderate carbon sink.

However, a recent rise in human activity in the world’s forested regions could have disrupted the balance between uptake and emissions, says Dr Alessandro Baccini, a researcher at the Woods Hole Research Centre in Massachusetts and lead author of the new study published in Science. He tells Carbon Brief:

Traditionally, studies of carbon loss in tropical forests have relied on data taken from satellite images of tree cover.

This approach allows scientists to see the extent of deforestation in tropical regions, but it can overlook more subtle types of human activity, such as illegal logging, forest disturbance and land degradation. Baccini says:

“Degradation is a process where only a small portion of trees are removed from a forest. From a satellite image, the area will still look like an intact forest. But, when you lose even a small proportion trees, you lose a significant amount of carbon.”

Because of this caveat, the researchers opted instead to look for changes in “carbon density” from tropical forests spanning America, Africa and Asia.

The researchers collected carbon density measurements from forests across the tropics and used these to create a statistical model. The model was then used to simulate fine-scale changes in carbon gain and loss in tropical forests over the course of 12 years.

The research finds that the world’s tropical forests gained 436m tonnes of carbon from 2003 to 2014. This is largely due to the recovery of previously disturbed forests, the researchers say.

“We discovered that land degradation has a very significant effect on carbon loss. The carbon loss from land degradation is small but, because it happens a lot over a very large area, then it adds up to a lot of loss. We like to think that this is the first study where we can provide an estimate of the losses due to degradation over such a large area as the entire tropics.”

However, the research may have overlooked the impact of gradual processes that promote carbon gain, says Prof Guido van der Werf, a scientist from Vrije University in the Netherlands, who was not involved in the study. He tells Carbon Brief:

“The current paradigm based on multiple lines of evidence is that terrestrial vegetation absorbs a substantial chunk of our emissions, but this research implies it is actually the other way around. If correct, the work certainly challenges the way we account for the global flows of carbon between various reservoirs and places on earth.

“You have to keep in mind though that it is much easier to detect the large decreases in forest biomass due to deforestation than the very gradual increases due to net forest growth, for example due to CO2 fertilisation. This is especially true for relatively short time series such as the 12 years of this study.”

(Carbon Brief has previously reported on the impact of CO2 fertilisation on the climate.) 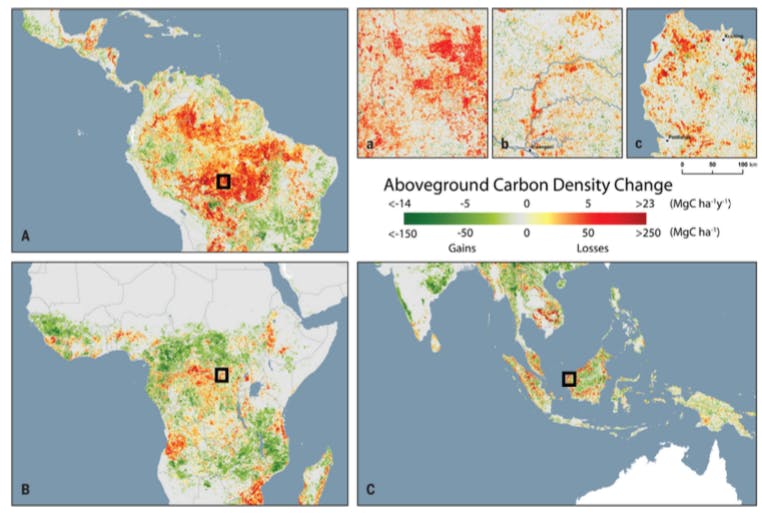 The results find that the largest carbon losses took place in forests in Latin America, while the largest gains were made in Africa. This pattern is largely driven by local levels of deforestation and land degradation, Baccini explains:

From source to sink?

Although the world’s tropical forests are currently considered to be a carbon source, there are a number of steps that could be taken to turn them back into a carbon sink, Baccini says:

“There is a possibility that by restoring the forest, by reducing, decreasing or stopping deforestation, by reforestation projects, we could actually make it into a sink. And it would be a pretty big sink.”

Restoring the ability of forests to remove carbon from the atmosphere could help us tackle climate change, he adds. Carbon Brief has previously explored how reforestation and other negative emissions strategies could play a role in reducing the amount of greenhouse gases in the atmosphere. Baccini says:

“Reforestation and afforestation could improve the quality of the planet through the conservation of biodiversity and an improvement in water quality and water resources, and all of this while we are reducing the concentration of CO2 in the atmosphere. It’s a win-win-win possibility.”