When air quality dips, office workers in China are much more likely to order lunch deliveries and generate plastic waste, a new study has found. This probably applies to other smoggy cities in developing countries, researchers say.

Controlling air pollution in cities not only prevents people from dying prematurely. It would also lead to a reduction in plastic packaging waste, researchers from the National University of Singapore (NUS) have found.

In a study published this week in the journal Nature Human Behaviour, the researchers found office workers in China ordering more lunch deliveries on days when the air was more polluted.

A delivered meal used an average of 2.8 plastic items weighing an estimated 54 grams, far higher than the estimated 6.6 grams of plastic (for items such as chopstick wrappers) used in a dine-in meal, the researchers concluded from over 3,000 photos of meals submitted by office workers as part of the study.

Plastic waste is a growing environmental problem, with over 300 million tonnes consumed a year and an estimated eight million tonnes entering and polluting the seas and oceans each year.

China alone discharges between 1.3 million and 3.5 million tonnes of plastic waste into the sea each year. It is also one of the world’s largest users of online food delivery platforms. Each day, 65 million meal containers are said to be discarded across China, and office workers contribute to over half of the trash, the researchers noted in their study, Air pollution as a determinant of food delivery and related plastic waste.

While we see more research on the impact plastic pollution is having on the natural environment, there has been less work trying to understand the human behaviour that drives plastic pollution.

“While we see more research on the impact plastic pollution is having on the natural environment, there has been less work trying to understand the human behaviour that drives plastic pollution,” said Associate Professor Alberto Salvo of NUS’ economics department and a study author.

“This is where our study seeks to contribute—finding a strong causal link between air pollution and plastic waste through the demand for food delivery. Air quality in the urban developing world is routinely poor and in the past decade, the food delivery industry has been growing sharply. The evidence we collected shows a lot of single-use plastic in delivered meals, from containers to carrier bags.” 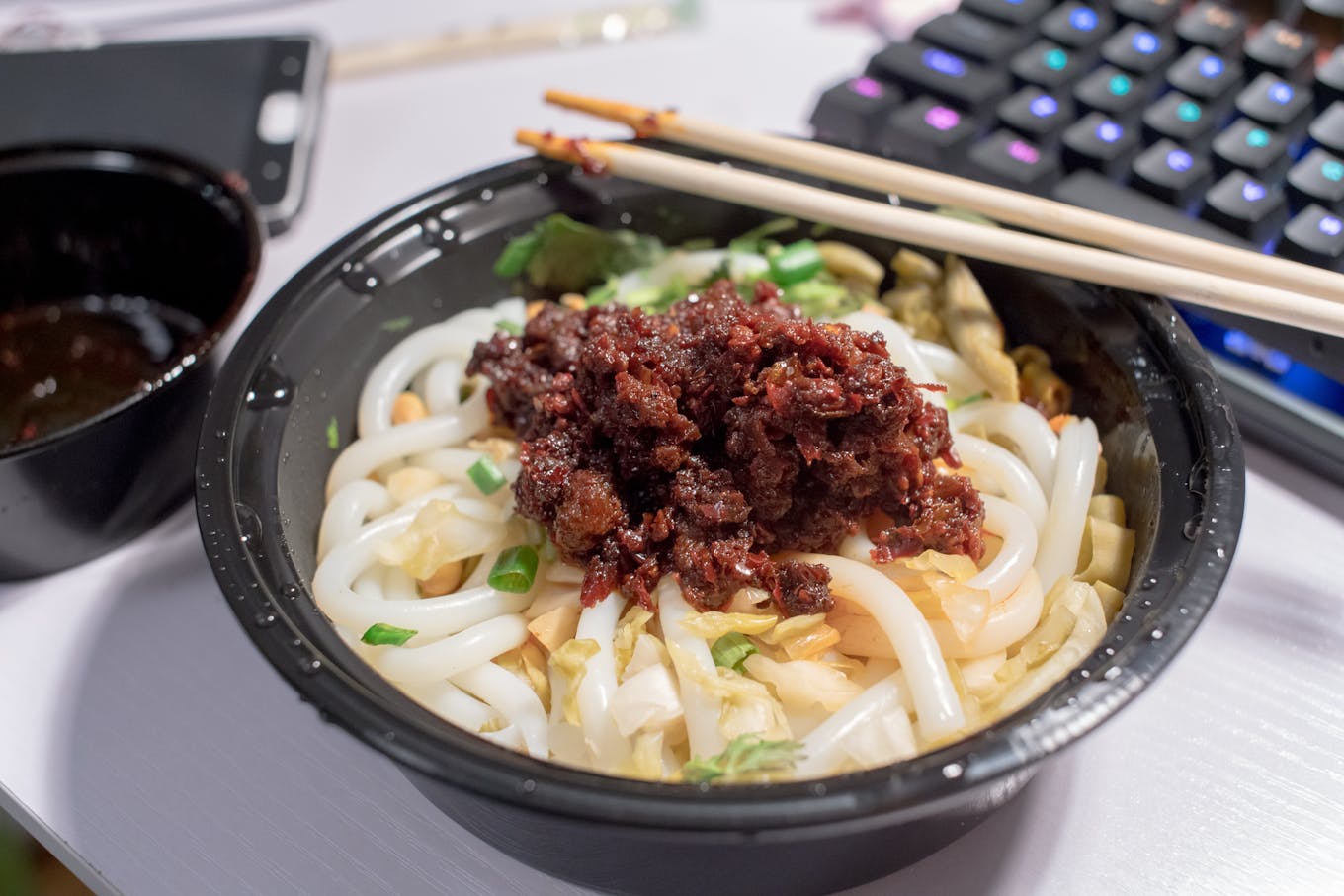 A delivered meal used an estimated 54 grams of plastic, far higher than a dine-in meal. Image: George N via Flickr, CC BY 2.0

The researchers surveyed the lunch choices over 11 days of 251 office workers in three often-polluted cities—Beijing, Shenyang and Shijiazhuang. The workers were surveyed from January to June in 2018.

The researchers also examined the 2016 order book of a Beijing online food delivery platform, which comprised 3.5 million orders from about 350,000 users.

They compared both sources of data with levels of fine particulate matter, or PM2.5, in the three cities during lunch hours. They found that an increase in PM2.5 of 100 micrograms per cubic metre (μg/m³) made office workers 43 per cent more likely to order lunch deliveries.

The impact of elevated PM2.5 on the Beijing company’s order book was a smaller, but still significant 7.2 per cent increase. The increase is larger among office workers because many do not have immediate access to a kitchen, explained another study author, Associate Professor Chu Junhong of NUS Business School.

From the photos submitted of meals, the researchers estimated that if all of China experienced a PM2.5 increase of 100μg/m³ on a given day—as is “routinely observed” in Beijing—2.5 million more meals would be delivered using an extra 2.5 million plastic bags and 2.5 million plastic containers.

Findings may apply to other countries, and events such as a viral outbreak

Beyond meal deliveries, consumers may also prefer to order groceries and other goods online on polluted days, adding to the flow of plastic packaging waste, the study noted. Plastic makes up about a-tenth of municipal waste worldwide.

And while the study focused on food delivery and air pollution, similar behaviour may extend to other environmental events such as extreme heat or a viral outbreak, they added.

However, the use of plastic packaging in food delivery and how packaging waste spills into the environment may vary across cities, they noted. “For instance, in the long term tighter regulation, including price mechanisms (for example, a plastic tax), may induce environmentally friendly packaging, and improved waste management may collect and recycle a higher fraction of plastic waste.”

Their findings come in the wake of another recent study on the environmental impact of plastic bags and their alternatives in Singapore. Most residents in the country live in high-rise apartments and use plastic bags for their trash, which is thrown down rubbish chutes from their apartments.

The scientists looked into the life-cycle of the bags—the amount of natural resources needed to make and transport the bags to Singapore, and end-of-life disposal and treatment.