To achieve its carbon targets, Malaysia should work on a decarbonisation task force and mandatory climate education among other solutions, urged experts.

In the fight against climate change, making climate education compulsory in schools is top priority to build capacity for a sustainable future, said founder of Climate Governance Malaysia, Sunita Rajakumar.

“Not teaching a child about climate change is like sending them on a boat trip without teaching them to swim or giving them any food. That’s exactly what we’re doing now and it’s horrific,” said Rajakumar.

Speaking on a webinar organised by Eco-Business titled Carbon targets in Malaysia: Challenges and Opportunities, she said by mandating climate education in schools, parents and teachers will learn, and it helps build capacity for the next generation.

“As we’ve seen all around the world, what the overwhelming majority of scientists couldn’t achieve, children have managed to achieve,” she added.

While climate education is lacking within most curricula around Asia, there have been grassroots efforts to raise awareness among schools. Last year, a senior lecturer from Universiti Teknologi Malaysia attracted the participation of 55,000 students from over 500 schools in Johor for a challenge to save water and electricity, revealing a palpable willingness among students to learn more about environmental issues.

According to Earth Day Network, countries like India, Philippines, China, Japan, and Brazil have had environmental education formally mandated in their national curriculum for years, some even decades.

More recently, Singapore announced in March a strengthening of green efforts in schools and education institutions by enhancing the teaching of sustainability within the curriculum, among other initiatives.

In addition to climate education, one of the key mitigation levers for Malaysia is to increase renewable energy penetration and make it cheaper than coal, said Malavika Bambawale, Asia Pacific managing director and head of sustainability solutions at Engie Impact, a decarbonisation consultancy.

Over the last 15 years, the share of coal in Malaysia’s electricity generation has gone up from about a quarter of the energy mix to almost half. While the Malaysia Energy Commission has plans to reduce the dependency on coal to about 20 per cent by 2039, there are still plans to build new coal plants along the way. 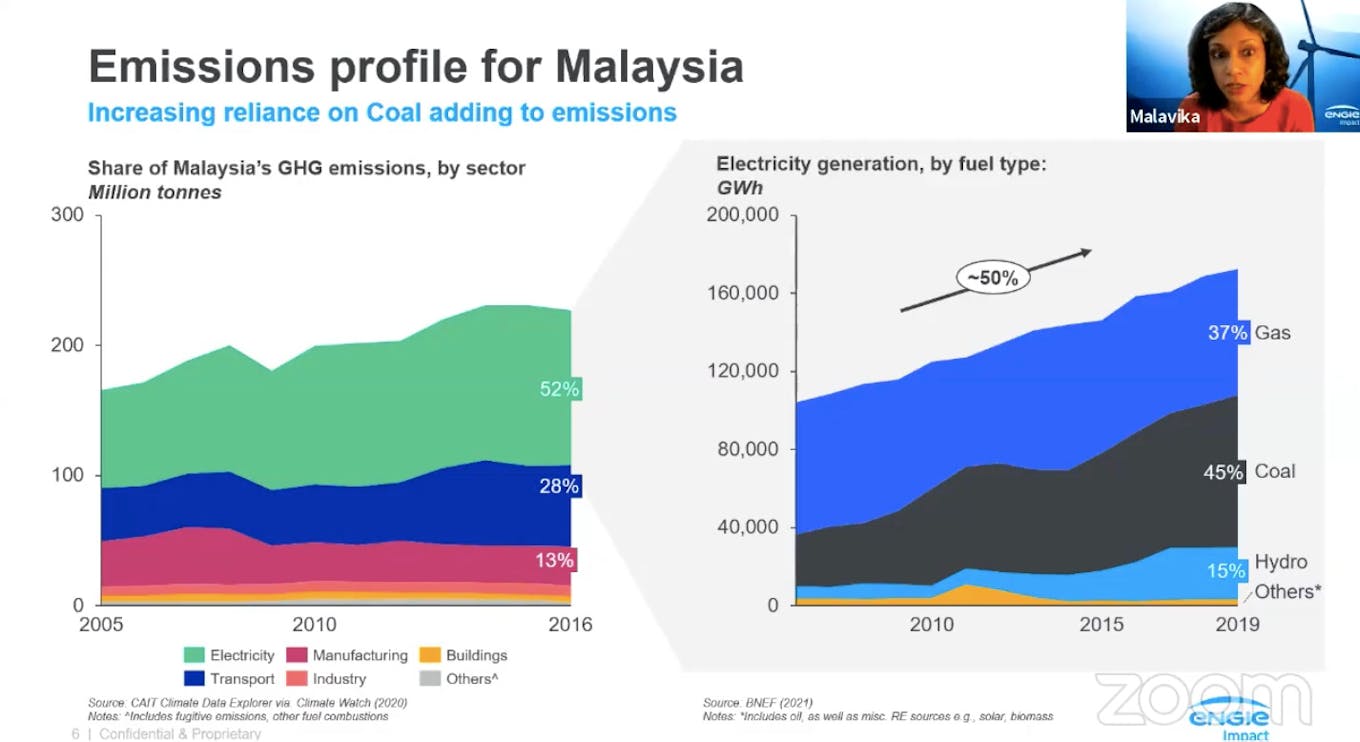 Currently, renewable energy accounts for 17 per cent of Malaysia’s grid, but it needs to go up to 30 per cent to achieve a 45 per cent cut in emissions intensity by 2030, relative to 2005 levels — a pledge made to the United Nations Framework Convention on Climate Change (UNFCCC).

“While Malaysia has been taking action on climate change through intensity targets and recent policies, the current trajectory is not in line with global ambitions,” Bambawale said.

Responding to a question about whether Malaysia is ready for a carbon tax, Rajakumar said: “This pollutant needs to be priced. The fact is that we are late to the party. In Malaysia, we’re still talking about single digit pricing, per metric tonne of carbon.”

Shadow pricing is a theoretical price on carbon that helps support long-term business planning and incentivise low-carbon behaviour. Last year, one of the world’s biggest insurance groups, Swiss Re increased their internal carbon pricing to US$100 per tonne, while Goldman Sachs estimates a carbon price of US$40-80 per tonne.

“We should mandate shadow pricing overnight. It doesn’t cost anything and doesn’t even have to be accurate. But it immediately allows the allocator of capital—your banker, investor or insurer—to know whether this business is going to survive long term,” said Rajakumar.

“It gives a direct line of sight as to the quality of management, and whether the company understands that they’re facing a triple crisis of climate, biodiversity and pollution,” she added.

“What’s bringing this to the attention of decision makers is that our trading partners are contemplating carbon border adjustment mechanisms. There’s nothing like the prospect of tax authorities in your export markets, raking in the cash at your expense, to find your inner climate activist,” she said.

“We don’t have the luxury to delay this anymore. It’s the perfect market mechanism that will help to incentivise action towards mitigation,” Bambawale added.

Is Malaysia reaching a tipping point?

Businesses should understand the full scale of the transition towards net-zero as Malaysia is approaching a tipping point tipping point for decarbonisation, the experts cautioned.

Sustainability is also gaining momentum with significant push from the finance sector. As banks start to assess companies from a carbon standpoint, not just a financial one, executives and board members are realising the importance of transforming their businesses.

“Pretty soon, your chief financial officer (CFO) will walk into a bank expecting a loan and find that the bank knows their carbon footprint better than they do. Companies don’t want to wait for that to happen,” said Johan Raslan, board of directors at the Institute of Corporate Directors Malaysia.

Malaysian bank CIMB, which pledged to quit coal by 2040 in line with the Paris Agreement last year, has been at the forefront of the action, initiating the CEO Action Network (CAN), said Raslan. “When CEOs take interest, CFOs and all the other C-suite members will also do the same. Setting the tone from the top will work its way down.”

Climate Governance Malaysia has also been actively engaging the government on a series of roundtable conversations about low emissions pathways. Earlier this month, the minister of finance indicated that he was confident that Malaysia could be net zero by 2050, said Rajakumar.

There have also been many signals from the regulators during their annual flagship conference in July that sustainability is the direction of travel, and they’re looking closely at voluntary carbon markets.

“In the last few months alone, we have gained significant traction from when we weren’t allowed to even say net-zero by 2050, to having key voices in the government acknowledge that this is a conversation. But there’s no reason to pop out the champagne—it’s a long journey with no roadmap and no silver bullet,” Rajakumar added.

“What’s needed is a central leadership and focus, a decarbonisation task force that works across government and businesses to work towards a net-zero pathway for Malaysia,” said Bambawale.