Tesco Lotus will stop giving out plastic bags in its 2,000 stores in January 2020. When it announced the decision, there was an uproar among customers. Retailers around the region will empathise as they grapple with their responsibility to respond to the plastic crisis.

When one of Thailand’s biggest supermarket chains, Tesco Lotus, announced that it was to stop giving out free single-use plastic bags in January 2020, a predictably heated debate in social media ensued.

More than half of the comments were negative, shared Salinla Seehaphan, director of corporate affairs for Tesco Lotus, at an event discussing solutions for plastic pollution in Bangkok last week.

In January, when the ban is introduced, Seehaphan said she feared check-out staff will get “strangled to death by customers.”

To mitigate the inconvenience of a plastic bag-free supermarkets, the retailer will sell reusable bags. Customers who bring their own bags get cash coupons and discounts.

The hypermarket, which serves 12 million customers in 2,000 stores every week, switched from plastic to paper bags in November last year—but only for 24 hours to mark National Environment Day.

“Trying to convince customers to stop using single-use plastic has been a long, long journey. We all know that we’re addicted to plastic bags to carry everything. And sadly, consumers have not reacted well [to the company’s attempts to reduce plastic bag use],” she said at the SEA of Solutions event convened by SEA circular, an initiative of the UN Environment Programme and the Coordinating Body on the Seas of East Asia.

We might get strangled to death by our customers on that day [of the plastic bag withdrawal].

“Only in the last year have we seen some traction [among consumers who are more receptive to plastic bag reduction]. This is due to an increase in awareness of the consequences of high plastic use, which has been in the news a lot,” said Seehaphan. In June last year, a whale with 80 plastic bags in its stomach found in southern Thailand made international headlines.

Seehaphan’s fears of a plastic backlash are shared by retailers in other markets in Asia Pacific that have attempted to charge for plastic bags. When Australian retailers introduced a levy on plastic carriers in July 2018, the phenomenon of “bag rage” was born, with consumers angrily demanding free plastic bags to carry their shopping. Retailers later scrapped the levy.

Singapore’s NTUC Fairprice has had a similar experience. Fearing the ire of Singaporean shoppers, the retailer shelved an idea to charge for bags in 2017. After scrapping a rebate system for carriers that began in 2007, Fairprice introduced a month-long trial charge in select stores in September, and has just extended the trial in other stores it for another year.

Tesco Lotus’ plastic bag withdrawal plan is a response to a national policy made by the Thai government to encourage retailers to make commitments to scale back plastic use. The policy is not law, so retailers are not obliged to introduce a ban or tax on plastic, and there will be no penalties for companies that do not introduce reduction measures.

Would Tesco Lotus scrap the plastic bag initiative if there was a sufficiently negative response from customers? “You never know, maybe, we’ll have to see. We’ll try our best. We’ve made a commitment to the government,” Seehaphan told Eco-Business on the sidelines of the event. 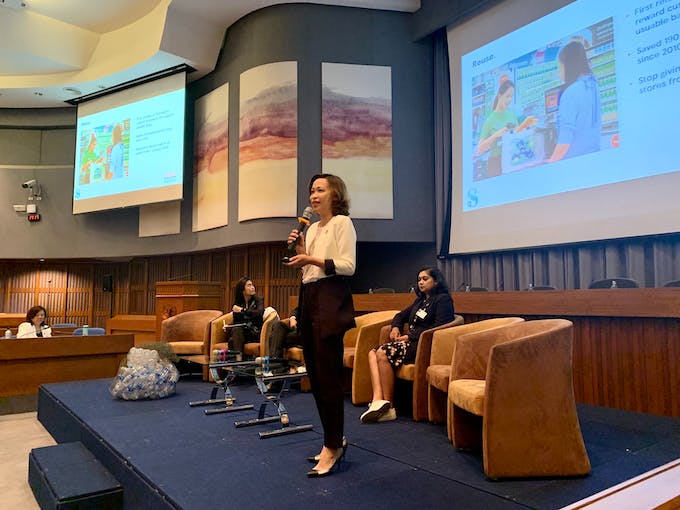 After making a presentation at SEA of Solutions, Seehaphan was challenged on what the company was doing to address other forms in single-use plastic in their supermarkets, such as the wrapping of individual fruit slices deemed unnecessary by environmentalists and some consumers.

Seehaphan said that plastic was necessary to maintain the shelf life of food and reduce food waste, but added that the company was looking to introduce recycled plastic to wrap food in the coming years.

She said that the company needed to find a partner to supply the right recycled packaging material, and noted that recycled plastic was previously banned in Thailand, because of it was not deemed of high enough quality and there were safety concerns.

Concerns over the perceived cleanliness of recycled plastic among Asian companies emerged as a major theme running through the United Nations-hosted conference in Bangkok last week, with one of the region’s biggest plastic producers claiming that Asian consumers consider recycled plastic to be “dirty”, resulting in the reluctance of firms to use it.

Seehaphan noted that Tesco Lotus has switched from styrofoam to thermofoam—a material that uses less plastic—to package meat, installed reverse vending machines to collect single-use plastic bottles, and is making pillows out of plastic straws for the underprivileged.