Half the projects being planned, that overlap with important conservation areas, are in India, Southeast Asia, South America and Africa. Researchers say there is already enough degraded land to support the world’s energy transition.

Renewable energy is crucial in the fight against global warming, but the development of wind, solar and hydropower projects in important conservation areas could spell disaster for birds, great apes and other wildlife.

For the first time, researchers have done a comprehensive study of current and future renewable energy projects in important biodiversity areas.

They found 922 large renewable energy projects in the global pipeline that overlap with important conservation areas. Just over half (51 per cent) are in the developing regions of India, Southeast Asia, South America and Africa, and over 300 of the planned projects are in Southeast Asia and India.

Renewable energy facilities worldwide are increasing in size, noted the researchers, who defined large projects as those with 10 megawatts’ capacity and above.

Worryingly, this next wave of renewable energy infrastructure will mean a 30 per cent rise in protected areas and key biodiversity areas that are impacted worldwide, and a 60 per cent increase in the number of compromised wilderness areas, they noted in a study published this month in the journal Global Change Biology.

Calling for coordinated planning of renewable energy expansion and biodiversity conservation, the research team said that efforts on both fronts are essential to prevent species extinction, as well as catastrophic climate change. Done in isolation, conservation and clean energy efforts will be limited in effect.

“There are more than enough renewable energy resources outside conservation areas, a lot of it can be built on already degraded land or within built environments, so avoiding overlaps only requires better and proactive spatial planning,” said Jose Rehbein, lead author of the study, titled Renewable energy development threatens many globally important biodiversity areas. A former research assistant at the University of Queensland in Australia, he is currently a consultant in environment, natural resources and blue economy at the World Bank.

There are more than enough renewable energy resources outside conservation areas, a lot of it can be built on already degraded land or within built environments, so avoiding overlaps only requires better and proactive spatial planning.

The energy industry must recognise that it is critical to avoid sites that have been formally identified as important conservation areas, and governments and industry must strengthen environmental and social impact assessments, the study urged.

Past reports by environmental and human rights groups such as International Rivers have found that the world’s largest hydropower corporations—including Chinese state-owned enterprises such as Sinohydro International and PowerChina Resources—fail to meet basic social and environmental standards in preparing and constructing new dams.

Rehbein and his team said having fewer large facilities, and more smaller and dispersed renewable energy facilities, could also reduce the land required for energy development. Studies have found that renewable energy production can require up to 10 times more land area than fossil fuel power plants to produce the same amount of energy.

Rehbein’s team paid for a dataset from the GlobalData Power Database for their study and, therefore, could not publish the names of upcoming projects in conservation areas.

But they noted that hydropower projects are driving large numbers of potential future overlaps in India and Nepal. In China and Kuwait, solar energy plants are driving potential future overlaps, while in Costa Rica, it is predominantly wind facilities. “This highlights that each nation needs to have its own specific planning systems in place to deal with future energy generation problems,” they said. 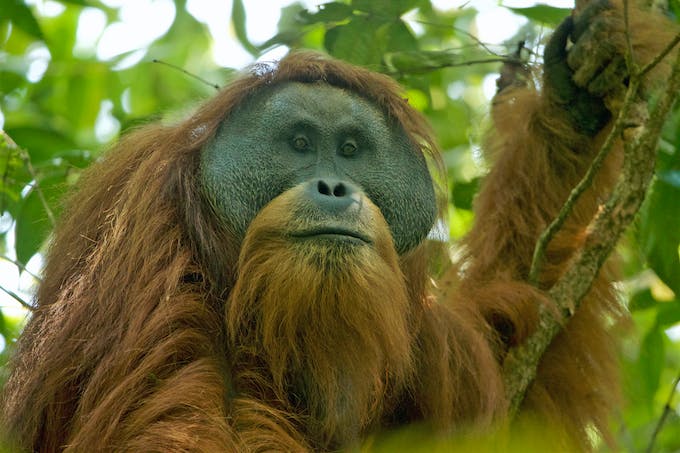 Projects in the pipeline that have made the news and alarmed conservationists include the Batang Toru hydropower project in North Sumatra, which could threaten the only habitat of the critically endangered Tapanuli orang utan.

India’s Rajasthan desert region has also emerged as a major area for wind and solar power expansion, said Tris Allinson, senior science officer at environmental organisation BirdLife International. But it is where the last viable population of one of the world’s most threatened birds, the Great Indian Bustard, is found.

“With these new energy facilities come powerlines, and collision with powerlines is now the largest cause of mortality for Great Indian Bustards. If these collisions are not dealt with, the species could very soon go extinct,” said Allinson, who leads BirdLife’s work on the avian impacts of renewable energy.

BirdLife is now working with the Indian government and other stakeholders to map the distribution of the species, so that future renewable energy infrastructure can be sited more responsibly, he told Eco-Business.

India’s ambition to install 175 gigawatts of renewable energy capacity by 2022 will require close to 12.5 million hectares of land—an area equivalent in size to Austria, Allinson said. The Nature Conservancy found that if this target is achieved with the singular aim of maximising resource potential—siting wind farms where the wind is strongest, for instance—this could threaten more than 10,000 square kilometres of forest and 2,500 sq km of important bird habitats.

Yet, India has 12 times the land needed to achieve its solar and wind goals by using already degraded lands with low social and ecological value, Allinson noted. BirdLife is planning to work with the Indian government and other partners to create a bird sensitivity map for the country, so that its energy transition does not exact an “unacceptable toll” on birds.

What about renewable energy projects that are already up and running? Rehbein’s team found that out of 12,658 large-scale facilities, 2,206 (17.4 per cent) currently operate in important conservation areas. The vast majority are in Western Europe, including Germany, which has 258 such facilities, and Spain, which has 252. China has 142 such facilities in key biodiversity areas.

It would be interesting, going forward, to study the carbon and biodiversity impacts of renewable energy projects, the researchers said. “If nations pursue a singular focus on decarbonisation through renewable energy expansion, they risk undermining the global mission to avert the biodiversity crisis which they have committed to via the United Nations Sustainable Development Goals.”