From handling to consumption of wildlife, the use of snares might be the most insidious driver of zoonotic diseases, a report by WWF warns.

While Covid-19 has highlighted the link between the illegal wildlife trade and public health, less has been said about the hunting techniques used to capture animals illegally.

The use of snares, the most prevalent hunting method in Southeast Asia, is devastating the region’s wildlife populations even more than habitat loss and degradation.

A report by the world’s largest nature conservation group, World Wide Fund for Nature (WWF), estimates that there are over 12 million snares present in the protected areas of Cambodia, Laos and Vietnam alone.

Indiscriminately killing and maiming, snares are wiping out the region’s wildlife, from tigers and elephants to pangolins and palm civets, and emptying its forests. These species don’t stand a chance unless Southeast Asian governments urgently tackle the snaring crisis.

From handling to consumption of wildlife, snare use increases human exposure to species carrying zoonotic diseases. The species targeted for snaring, most notably ungulates and carnivores, have been identified as among the highest risk mammal groups for zoonotic diseases transmission.

In addition, two Southeast Asian species—masked palm civet and Sunda pangolin—both of which are often snared, have been identified as possible intermediary hosts for zoonotic disease transfers. 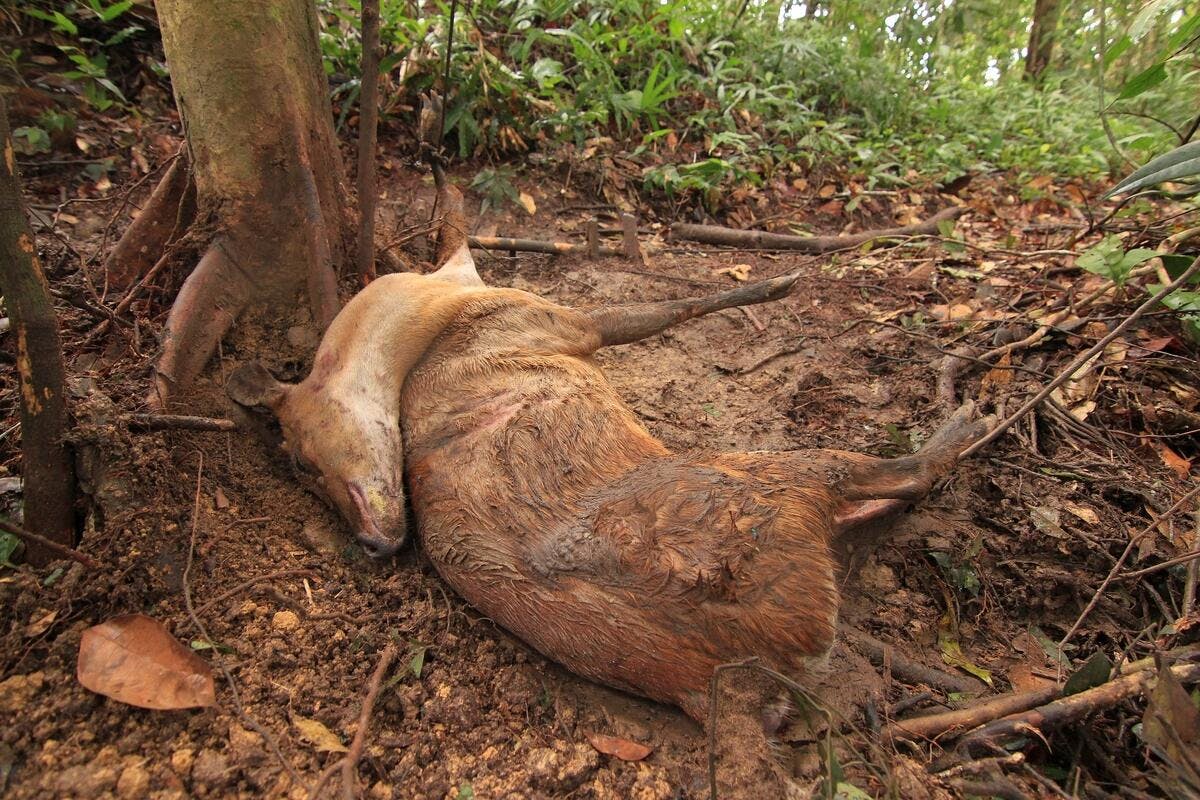 A snared barking deer discovered in Royal Belum State Park, Malaysia. The snare was suspected to have been set by Vietnamese poachers. Image: Lau Ching Fong/WWF-Malaysia

Made from widely available household items like rope, wires and cables, snares are cheap and easy to produce. These rudimentary traps can be set in large numbers to capture animals illegally for wildlife meat and products.

Given that snares can capture all animals unfortunate enough to encounter them, they are a terrestrial equivalent to the drift-nets that have devastated marine and freshwater biodiversity, WWF said.

“Indiscriminately killing and maiming, snares are wiping out the region’s wildlife, from tigers and elephants to pangolins and palm civets, and emptying its forests. These species don’t stand a chance unless Southeast Asian governments urgently tackle the snaring crisis,” said Stuart Chapman, lead of the WWF Tigers Alive Initiative, in a statement.

WWF noted that 58 per cent of all identified human pathogen species are known to originate from animals. Zoonotic diseases include rabies, Ebola, tuberculosis, and emerging coronaviruses such as Severe Acute Respiratory Syndrome (Sars), Middle East Respiratory Syndrome (Mers), and most recently, Covid-19.

Covid-19 is believed to have jumped from an animal—possibly a bat or a pangolin—to a human in a wildlife market in Wuhan, China, before spreading around the globe and infecting more than 13 million people worldwide. In response to the pandemic, the Chinese government announced a comprehensive ban on all wildlife trade and consumption in February.

An earlier survey by WWF revealed that citizens in Southeast Asia support the closure of all illegal and unregulated wildlife markets in their respective countries. But in the region, illegal wildlife trafficking continues to thrive.

“Simply removing snares is not enough. Governments in Southeast Asia must improve national law enforcement and strengthen legislation to act as an effective deterrent against snaring, as well as engaging indigenous peoples and local communities as partners to stop this threat,” said Sophia Lim, executive director and CEO at WWF-Malaysia.

The authors found many loopholes within the legal regulation of snaring in Southeast Asia. For example, only Malaysia legally defines what constitutes a snare, and only Malaysia and Vietnam guarantee a serious minimum penalty for any type of hunting by snares within protected areas.

Within a Southeast Asian context, the coalition calls on governments to prevent the purchase, sale, transport and consumption of all high-risk taxa in markets and restaurants, and ensure that criminal penalties like fines and licence revocation measures are strict enough to be effective.

They recommend introducing market and restaurant monitoring mechanisms to ensure high-risk wildlife products are not being sold. They also suggest involving ministries responsible for environment, health and public security in the development and implementation of regulations.