Speedbreakers are an annoying but essential aspect of road driving. One company has now taken this ubiquitous feature and transformed it into a smart city solution that generates clean energy and also helps manage city traffic.

For most drivers, traffic lights, speed bumps, and car park gantries are a daily crimp on their journey.  But for one company, these are viewed as a golden business opportunity - a smart city solution that generates clean energy and helps make urban traffic smoother.

Meet Transkinect, a Singapore-headquartered company, which was set up in 2014. The company has spent the past year and a half developing its key product – a ‘smart’ hump called Movnetic, which is an innovative take on the traditional speed breaker that captures energy from decelerating or braking vehicles and converts it into electricity.

This technology is the brainchild of Egyptian civil engineer Ihab Abdelkarim Seidy, who invented it more than a decade ago.

The hump can be installed anywhere that cars are likely to slow down, such as entrances to carparks or private buildings, in place of speed breakers on the road, and at traffic lights.

Cars lose kinetic energy every time drivers hit the brakes, and mechanical and electrical systems embedded in the hump capture this energy. This energy varies according to the vehicle’s weight, speed, and the number of axles in each passing vehicle.

Much like a solar or wind installation, the hump is linked to a charge controller, which manages electricity flows; an inverter, which converts generated electricity to a voltage that clients can use; and then a battery, where the clean energy can be stored till clients need it.

The system also comes with an online dashboard that lets users monitor the number and type of vehicles passing over the hump, as well as how much energy is generated and used.

Between two and five kilowatts of power can be generated by the hump for every 5,000 vehicles that pass over it, enough to light between 100 and 500 LED lamps for up to 18 hours a day, says Seidy. 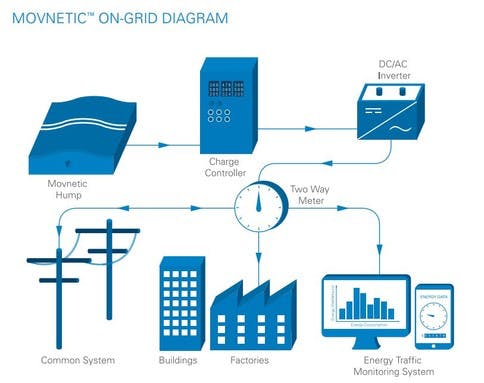 Seidy, 47, patented this concept in Geneva, Cairo, and Singapore in 2002, and first marketed it as an ‘Egyptian Electric Pedal’ in Egypt in 2004. The hump successfully provided energy to the Cairo headquarters of oil company Petrojet, but the success of his company - then known as Think Tank Team - was short-lived due political instability and a lack of funding. It closed in 2005.

Eventually, in 2013, Seidy left the construction and engineering business in Dubai and Germany to move to Singapore, where he launched Transkinect and unveiled his product under a new name, Movnetic.

With this backing, Transkinect has invested about S$500,000 into developing this technology for the market, says Seidy in a recent interview. The start-up has been working with research partners such as the National University of Singapore’s Department of Mechanical Engineering to hone the Movnetic technology.

“Singapore was a good choice because it is known for supporting the development of green technologies and international business platforms, especially in the form of government funding and subsidies to run test-beds,” he says.

The city-state is also part of a growing global shift towards using technology to make cities smarter. Many metropolises worldwide - especially rapidly growing cities in developing countries - are turning to technology to help address challenges such as water scarcity, traffic congestion, and stress on energy infrastructure.

According to market research firm Navigant Research, the global market for tools such as smart grids, water monitoring systems, transport management systems and green buildings will be worth more than $27.5 billion annually by 2023, compared to $8.8 billion today.

Asia Pacific is expected to lead the push towards smart cities, says Navigant Research. And Singapore is at the forefront of this trend: In November, Prime Minister Lee Hsien Loong declared an ambition to make Singapore the world’s first Smart Nation, and also unveiled a sustainability masterplan, the Sustainable Singapore Blueprint.

Lee said the Smart Nation vision would not only improve the quality of life and sustainability in Singapore, it would also create new business opportunities and boost economic competitiveness.

The Movnetic concept contributes to the movement by helping to reduce reliance on fossil fuels, and aiding city planners with traffic management through data collected on car movements.

Unlike other sources of renewable energy such as wind or solar power, the smart hump does not need specific weather conditions to work, says Seidy. It instead relies on traffic, which is all too abundant in cities and therefore ensures a consistent source of energy.

The hump also takes up much less space than big renewable projects - as little as one percent of the space of a solar or wind farm - and tends to be located mere metres away from the buildings or street lights where it is consumed, thereby reducing costs and power losses associated with transmission, he adds.

It could even offer a new source of profits for facility owners, says Seidy. Transkinect could, for instance, rent a few square metres of land needed to install a hump in a mall or industrial estate, and in turn sell the clean electricity back to the the owners or any company in the vicinity. 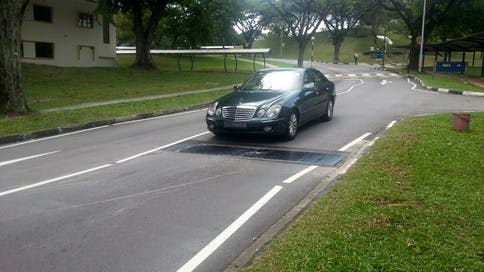 A Movnetic hump being trialled at the Nanyang Technological University campus. The Smart Hump is installed in zones where vehicles are expected to go slowly, such as school zones, car parks, and traffic lights. Image: Transkinect

Currently, installing one of the humps in a road lane takes about five hours, and costs between S$50,000 and S$100,000. The average period for return on investment is about three years, says Seidy, but this can vary depending on the frequency of traffic in the area and weight of vehicles passing over the hump.

The effort that Seidy and his team put into Movnetic paid off in January this year, when it was one among six cleantech firms picked by Singapore’s industry development agency JTC to test-bed its solutions in the city-state. The six firms together received S$2.5 million from the government to support these trials.

Leow Thiam Seng, director of JTC Corporation’s aerospace, marine and cleantech cluster, said that having such companies test-bed their solutions “this allows our industrial communities to benefit from the introduction of new urban solutions and best green practices at our estates”.

Under this trial, Transkinect will install three Movnetic humps at the entrance to Jurong Island –a large industrial complex in west Singapore - in October. About 50,000 vehicles drive through the entry point daily, notes Seidy, who expects the energy generated from the humps to provide about a fifth of the energy consumed by one of the checkpoint buildings on the island.

If the test-beds go well, it will help to overcome a key challenge Transkinect currently faces: Approval from the authorities to test out the smart hump on public roads.

Ultimately, Seidy’s vision is to have a smart hump installed wherever traffic needs to slow down or stop - both in Singapore, and the region’s bustling cities.

Transkinect is already in talks with other companies in Singapore, as well as neighbouring Malaysia, Indonesia, Thailand, and the Philippines. The firm’s target is to clinch S$30 million in annual sales revenue from Southeast Asia in the next five years.

To meet this goal, “we are now looking for more investments in further research and development, and are in negotiations to carry out more testbeds in countries like Malaysia, Indonesia, Thailand, Philippines”, says Seidy.

Opportunities to install this technology on roads worldwide are also set to grow, says Seidy, who notes that there will be 1.8 billion vehicles and more than 200 million kilometres of paved roads globally by 2050.

“We look forward to making the Movnetic even more energy and cost efficient and replacing more dead speedbumps with our smart, clean technology.”