Smart cities for a better world

As cities continue grow as economic centres, they are looking for ways to balance economic growth with sustainable development. Eco-Business looks at how smart cities have emerged as the answer to the wave of urbanisation sweeping the globe in the first part of a series that studies the role of technology in creating a better world.

As the world population grows to 9 billion by 2050, according to the United Nations, the number of those living in urban areas will swell by 3 billion to hit 6.3 billion. With demand from cities for energy and resources is set to spike on the back of urban population growth, smart cities have emerged as the modern answer to the wave of urbanisation sweeping across the globe.

But just what defines a smart city?

Using a more formal definition from a recent report by the United Cities and Local Governments, a global network of cities, local and regional governments, smart cities use new technologies, the promotion of innovation and knowledge management to become more liveable, functional, competitive and modern.

It brings together six key fields of performance: the economy, mobility, the environment, citizenship, quality of life and management.

Imagine a living environment where all city-wide systems are interconnected and talk to each other through a network of sensors, and where data and smart devices interact to help people assess which is the most efficient, congestion-free route to take to work, or where citizens can snap a picture of a pothole on the road and report it immediately to the relevant agency for fixing.

Professor Gerhard Schmitt, executive director at the Singapore-ETH Centre for Global Environmental Sustainability, notes that “there is a strong link between smartness, sustainability and liveability”.

“These things belong together,” he says, adding that smart cities are often those that have a government that are forward-looking and govern for the long-term rather than in short time horizons. Such cities also understand the “stocks and flows” – to borrow an economic term – of various aspects of the city. This includes people, resources used, energy and water, finances, density and information.

Singapore, he cites as an example, understood the fundamental connection between a good living environment free of pollution and economic growth early on and went about planning its city to ensure that it was attractive to international visitors and global talent.

Going beyond that, the city-state is now embracing smart city systems to improve things like energy efficiency and consumption, while enhancing the way it delivers municipal services to its citizens.

One example is the western Jurong Lake District, a “mini smart city” where such systems are being tested. The city’s Energy Market Authority is also piloting a $30 million Intelligent Energy System (IES), which is a smart grid that will allow the city to better manage electricity demand, and offer consumers improved services and products that will  allow them to actively manage their energy consumption, utility bills and carbon footprint.

The Infocom Development Authority in 2011 set up a Smart Cities Programme Office to develop infocomm-based integrated networks and solutions for urban environments to optimise the use of resources. This is not limited to technology but also encompassing other aspects such as sharing of data.

Singapore Economic Development Board’s head of cleantech, Goh Chee Kiong, notes that there is “tremendous potential to better harness ICT and intelligent systems to enhance the sustainability and liveability of cities, and at the same time generate new exciting economic opportunities across energy, water, environment, mobility, security and built environment.

“Smart city systems also play to the strengths of Singapore in systems integration that requires close cooperation on the whole-of-government basis,” he tells Eco-Business.

In the West, cities across Europe are also increasingly adopting smart city models. Santander, an old port city on Spain’s Atlanctic coast, for example, has emerged as a prototype for high-tech smart cities for the region. 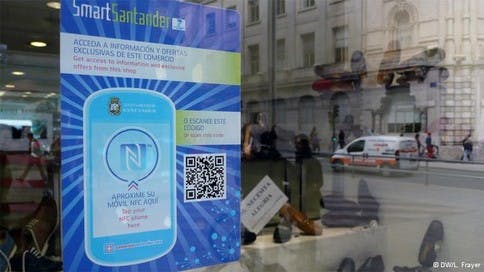 The Spanish city of Santander, with its 12,000 sensors, is a prototype of what future cities could look like

The city received a $11 million grant from the European Commission three years ago to pay for 12,000 sensors buried underneath its roads, linked to street lamps and city buses which can tell the city government and residents when car park lots are available, when the rubbish bin is full and when lights can be turned off because no one is around.

With a population of about 180,000 residents, the city is an ideal size as a pilot before Europe expands the devices into bigger cities. Apart from sending data to the city’s control centre, these sensors also send it to applications on residents’ smartphones, so they can access real-time information on traffic conditions or pollen count. Citizens can also upload photos of broken streetlights, for example, to send to their local government.

In Stockholm, Swiss power and tech giant ABB is working with Finnish utility Fortum on a research and development project at the new Royal Seaport district – a former industrial area undergoing urban regeneration - where a smart grid will link homes and offices as well as ships in the harbour to renewable energy with the ambition of creating a fossil fuel-free district by 2030.

And the Netherlands recently became the most populated country to have a country-wide EV network. Dutch start-up Fastned has concessions to build 201 charging stations out of the 245 stations planned for the country’s 16.7 million inhabitants. 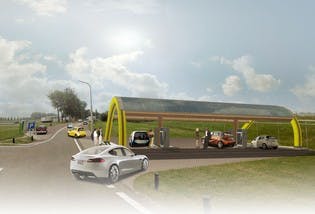 Each station, solar-roofed and located along highways, will be allotted different multi-standards fast chargers from ABB, which can power any major brand of electric vehicle from Europe, Asia and the United States within 15 to 30 minutes.

While smart city systems have opened up a world of opportunity for both the public and private sectors, there are the challenges ranging from technological limitations to implementation and cost. It is also a multidisciplinary challenge that requires city officials, policymakers, private sector suppliers, academics and civil society to work together.

The challenges also vary, according to whether the systems are being implemented in a new or existing city.

A June report on smart cities by building intelligence firm McGraw Hill Financial Global Institute notes that new cities have the luxury of not having to deal with existing conditions like ageing infrastructure, or processes that are habitual and resistant to change. Eco-cities built from scratch such as Masdar City in the United Arab Emirates, or the Sino-Singapore Tianjin eco-city in China enjoy the experience of doing it correctly from the start.

But it has its set of problems, often involving  new materials and new methods of construction which workers have not much experience in, and the lack of data for the systems meant to manage the process.

Most existing cities, says the report’s author Paul Doherty, take a pragmatic approach to becoming smart cities due to limited resources and also careful planning.  Cities like San Francisco, for example, are creating eco-districts as an approach to effecting bite-sized innovations with measureable results.  And in Boston, the city government has created an innovation lab that assists city departments with developing and testing innovations, providing relief from budget constraints and risk for each department.

Doherty highlights that the most important asset for existing cities is data - albeit most are in various forms of quality, structure and availability. Building departments, for example, may only have paper as their form of data to zoning boards that may have geographic information system (GIS) maps.

The task is daunting when it comes to gathering data from existing cities. But once implemented, such cities can see immediate results of how their data, when in a smart city environment, can provide better information for making good decisions.

This strategy of using existing data as the foundation for enabling a smart city is a best practice and should not be ignored, he notes.

SEC’s Prof Scmitt feels that the key to overcoming challenges in transformation a city into a smart one lies in the cooperation of the various stakeholders, not least the role of policymakers and the private sector.

“The government of the country has to set the example. This is the most important role. Leaders cannot ride around in huge limos and then ask people to take public transportation. In Switzerland, the ministers take the buses and trams,” he points out.

Singapore positions itself as a “living lab” where companies will find it convenient to develop, test and commercialise innovative urban solutions in a real-life setting

Secondly, there also needs to be regulatory measures. He points to Germany’s solar industry framework that has turned houses across the country into energy-producing units which can sell back into the national grid, creating a nationwide ‘smart’ system that optimises energy production.

“Governments have to get the people to trust that their investment will be protected for the long term. And they need to encourage the cleantech industries to blossom in their countries,” he adds.

In fact, Singapore positions itself as a “living lab” where companies will find it convenient to develop, test and commercialise innovative urban solutions in a real-life setting, he explains.

“The ease of collaborations with government agencies in co-development and generating lead demand is critical to the success of this “living lab” strategy.”  The country’s water industry is a good example as national water agency PUB generates sophisticated demand and thought leadership which in turn attracts many water companies to Singapore, he adds.

“The main thing is for industry to make these smart technologies affordable and understandable for citizens. For example, in Europe electric bikes are experiencing a boom as it becomes cheaper and people appreciate the advantages of using such a mode of transport,” he explains.

Haider Rashid, president of Singapore and South Asia for ABB, says that companies “should be motivated to contribute industrial experience and advanced technological know-how. End users should also be educated to understand the benefits of smart city living.”

Ultimately, observes Paul Doherty, smart cities are being created due to a perfect storm of economic conditions, the next generation of ICT tools, and urban migration that require new and existing cities to respond with powerful new solutions for the relationships between people, places and things.

“It requires not just smart technologies and systems but smart thinking.”