Renewables will give more people access to electricity than coal, says IEA

While coal has supplied nearly half of the progress from 2000 to date, the IEA says its role in electrification is set to decline dramatically as renewables become cheaper and more accessible to rural populations, particularly in Asia.

Around the world, more than a billion people still lack access to electricity.

This number is shrinking, down by one third since 2000, despite rising population levels, according to an International Energy Agency (IEA) special report on energy access, published last week.

The report says that while coal has supplied nearly half of the progress from 2000 to date, its role is set to decline “dramatically”. This is because renewables are becoming cheaper and because the hardest-to-reach people are in remote, rural areas where off-grid solutions offer the lowest cost.

The report shows the number of people without access to electricity will shrink by another third by 2030, with 60 per cent of these gains supplied by renewables. Furthermore, if the world commits to providing universal access by 2030, then renewables would bridge 90 per cent of the remaining gap, the IEA says.

There have been spectacular gains in providing access to electricity this century, cutting the number without it from 1.7 billion in 2000 to 1.1 billion in 2016, the IEA says. Most of this progress has been in Asia, as the charts below show (blue, yellow and green lines and columns).

India has led the way, with 500 million gaining access to electricity. Sub-Saharan Africa now has the majority of people still without access, at 600 million, an increase over the past 15 years due to rising populations. Recently, this number peaked and started to fall (red line and columns).

The rate of progress has been accelerating, the IEA says, rising from 62 million people gaining electricity access each year during 2000-2012 to 103 million during 2012-2015.

Coal has been the main source of this new supply, generating 45 per cent of the electricity used by people gaining access for the first time between 2000 and 2016 (purple pictograms in the chart, below).

There has also been a growing role for renewable sources of electricity, the IEA notes, with particularly rapid growth in decentralised off-grid access (dark green pictograms). From 2000-2012, renewables provided 28 per cent of new access to electricity. This figure rose to 34 per cent during 2012-2016. 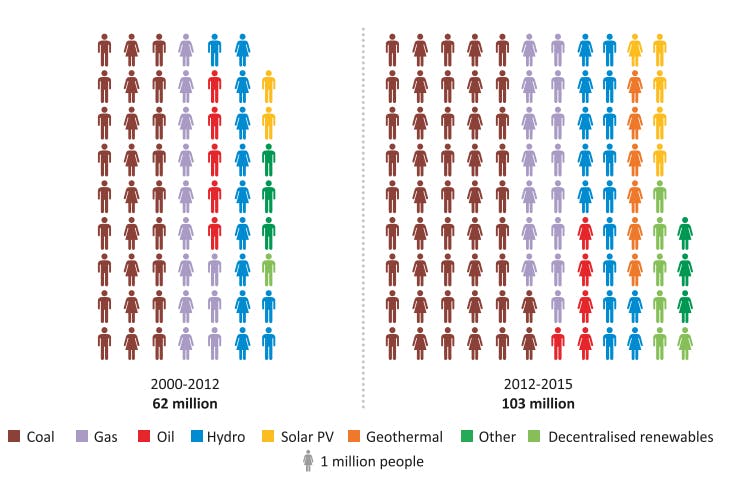 There are regional differences in the sources of new electricity connections. In India, for example, coal generated 75 per cent of new supplies, against 20 per cent for renewables. (This pattern is expected to reverse, see below.)

Looking ahead, the IEA says the number of people without access to electricity will fall to around 700 million by 2030, under its central scenario.

Asia will reach close to 100 per cent access to electricity by 2030 (lilac, yellow and green lines and columns, below) and India will meet its aim of universal access in the early 2020s (blue). The vast majority of the 700 million still without electricity in 2030 will be in sub-Saharan Africa.

Electricity access rate and population without electricity, by region, under the IEA’s central scenario to 2030. Source: IEA special report on energy access.

Note that this chart reflects the IEA’s central “New Policies Scenario”. This includes existing policies plus announced policies and intentions. It also reflects assumptions about the costs of different technologies and the rates of population and electricity demand growth.

Coal’s role in providing electricity access “declines dramatically”, the IEA says, providing power to 16 per cent of those who gain access over the next 14 years. This compares to 45 per cent during 2000-2016.

Note that the IEA has been criticised for repeatedly underestimating the rate of growth of renewables, particularly solar. This makes its outlook, in which renewables supply most new electricity access, even more striking.

If the world wants to meet the Sustainable Development Goal (SDG) of providing universal energy access for all by 2030, then 90 per cent of the additional electricity connections over and above the IEA’s central scenario will come from renewables, its report suggests.

This reflects the fact that the hardest-to-reach populations are those least likely to benefit from grid expansion. For these people, decentralised systems, predominantly supplied by solar (yellow columns, below), offer the “lowest cost pathway” to electricity access.

Additional population gaining access and cumulative investments, by type, under the “Energy for All” scenario, compared to the central scenario. Source: IEA special report on energy access.

The report, for the first time, uses geospatial analysis, at a resolution of one square kilometre, to assess the most cost-effective ways to deliver electricity access to sub-Saharan Africa, whether through grid or off-grid solutions. This analysis takes into account existing and planned infrastructure, technology developments, local resources, population density and likely demand.

It is this new analysis that suggests decentralised renewables will be the cheapest way to provide electricity access for sub-Saharan Africa’s rural poor. Note that researchsuggests Africa could more than meet its electricity needs, with renewable sources alone.

The IEA puts the cost of providing electricity access to everyone on the planet at an additional $391bn over the period to 2030. This would nearly double total spending, adding to the $324bn already expected to be spent under the IEA’s central scenario.

The energy access-focused SDG also includes provision of clean cooking services. The IEA says this can best be met using liquefied petroleum gas (LPG). As a result, providing universal energy access would increase CO2 emissions by 70m tonnes. This would be more than offset by savings of 165MtCO2 equivalent due to reduced methane and nitrous oxide from biomass used for cooking. The report says:

Achieving universal energy access is not in conflict with achieving climate objectives. The relatively small increase in total primary energy demand and the central role of renewables in our Energy for All Case means that global energy-related carbon dioxide (CO2) emissions increase by just 70 million tonnes (Mt) relative to the New Policies Scenario in 2030 (0.2 per cent of the global level).

The large numbers of people without access to electricity are a frequent point of contention in debates over how to address climate change.

Some proponents cite China and India’s reliance on coal to bring electricity to their populations. They argue that coal is cheap and must be part of the solution for the remaining 1.1 billion people that still lack access to electricity.

Not everyone agrees on how best to meet the needs of these people, who are mostly in sub-Saharan Africa. In a November 2016 interview, Dan Kammen, professor of energy at the University of California, Berkeley and a former science envoy to the US State Department, told Carbon Brief that coal has been given too much credit as a solution to extreme poverty in Africa.

Coal doesn’t even deliver the thing for which it’s really been touted for, and that is, bringing people out of poverty because somehow it’s this least-cost fossil fuel source…I really cringe a bit when I see people touting mega fossil fuel projects as the obvious, first thing to look at…Distributed clean energy, time and time again today, has proven to be better, cheaper, more socially and environmentally positive.

As a July 2017 World Bank blog explains: “In many rural areas in Africa, impacts on economic development of grid extension in the near term may be very modest, while off-grid technologies can be more cost-effective for meeting the most highly-valued basic household needs.”

In further support of the benefits of off-grid systems, it says:

The major downside of off-grid solar is that the relatively low amount of supplied electricity limits what those systems can do for the productive use of electricity. However, electricity usage patterns in newly electrified areas in rural Africa are often such that solar is able to meet those demands. Even in grid-covered rural areas, households and micro-enterprises use electricity mostly for lighting, phone charging, and entertainment – which can easily be provided by solar panels.

Regardless of these details, today’s new IEA report shows that coal’s role in expanding electricity access is set to decline dramatically. Renewables, both on and off the grid, will provide most new connections, as the population without access falls by another third to 700 million.

If the world hopes to meet its goal of universal electricity access by 2030, then the IEA report suggests it is solar – not coal – that will bridge the gap.

The IEA report defines electricity access as a minimum of 250 kilowatt hours (kWh) per rural household per year. This excludes the more than 23m “pico solar” units sold since 2010. The report explains:

People relying on ‘pico solar’ products, mainly solar lanterns which may include mobile phone chargers, are considered to be below the minimum threshold to count as having [electricity] access. Nevertheless, there are significant benefits for the poor associated with pico solar products.

You can see the range of solutions it considers in its report in the graphic, below. 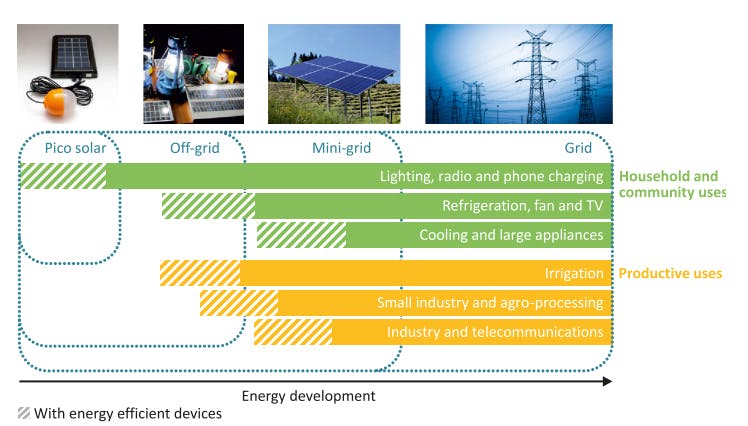 Illustrative technology options for providing electricity access and the range of uses they can supply. Source: IEA special report on energy access.

The IEA says there is a “general paucity” of data on access to electricity. Its report is based on its own statistics, national statistical agencies, other publicly available data and a network of contacts in government, multilateral development banks and elsewhere.