A move from Singapore's largest retailer to ditch plastic bags has backfired, with consumers complaining that the absence of single-use bags to carry chilled products has resulted in “slightly wet hands”.

Singapore’s biggest supermarket retailer CarePrice has announced that it will withdraw all single-use plastic bags from its stores - a move that has provoked a heated response from consumers, with some threatening to boycott the company until it reinstates the service.

CarePrice, the most popular supermarket chain in the city-state of 5.4 million, implemented the “Fantastic no-plastic” regime on Saturday, 1 April, as part of a campaign to improve the brand’s credentials among environmentally-conscious young Singaporeans.

The store continues to serve large bags for multiple, bigger household items, but has withdrawn small, single-use bags from its stores.

But the move appears to have backfired, with complaints flooding the company’s social media channels amid reports - unconfirmed by CarePrice - that its staff have been abused by customers frustrated by the ban. 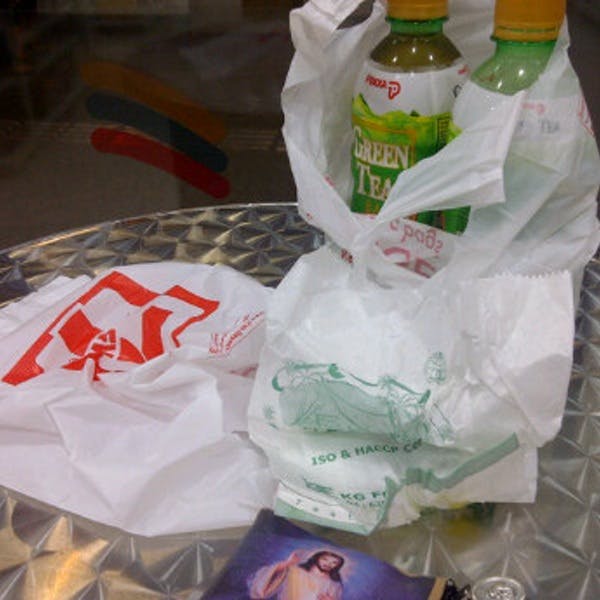 A plastic bag ban would be “an infringement on our right to convenience,” according to one complainant.

According to one report, a young man in a CarePrice outlet in the district of Yishun, threw a Yakult bottle on the floor after being refused a small, single-use plastic bag to carry it. He complained that the sweating product “made my hand slightly wet.”

Among the angry comments from CarePrice customers in social media was the suggestion that the plastic bag ban was “an infringement on our right to convenience,” with some suggesting that the stores, of which there are 290 island-wide, should be boycotted.

In a post on Instagram, one customer wrote: “Without having a tiny plastic bag to hold my single can of carrot juice, it feels like my maid has gone on holiday.”

The chain has tried to reduce its plastic bag footprint in the past. Last year, the brand announced that it had saved more than 10 million plastic bags as a result of a campaign to persuade its customers to bring their own.

But the company has not stopped giving away free plastic bags until now, and has - like its competitors - avoided introducing a charge, a move that has proved highly effective in reducing plastic bag use in many other countries including the United Kingdom, Germany, Hong Kong and Taiwan.

CarePrice chief executive officer John Tan said he would review the decision, which was made on the understanding that local attitudes had changed in Singapore, particularly among young people who would support the move.

One citizen, asked what he thought are the consequences of plastic bags for the environment, told Eco-Business: “Doesn’t the government need plastic bag waste to feed our garbage incinerators? The government should reward plastic bag users with lower taxes. We are providing a valuable service.”

Unlike other regional centres such as Hong Kong, where retailers have placed a levy on plastic bags, Singapore’s retail industry has shown little interest in putting a price on plastic in fear of losing customers.

Ikea is the only major retailer in Singapore to do so, removing disposable plastic bags in 2013 and introducing a range of reusable bags that it charges customers between $0.30 and $1.20.

In September last year, a group of local supermarket chains including Sheng Siong Group and Dairy Farm Group said they would consider imposing a charge if there was a “collective industry approach,” but expressed concern that the charge would impact low-income shoppers.

The industry and Singapore’s government has not changed its stance since, despite a persistent campaign from environmental group Zero Waste SG calling for the introduction of a plastic bag charge.

The NGO has proposed that retailers charge 10 cents for a big plastic bag and five cents for a smaller one.

Critics of the idea have pointed out that people use plastic bags to carry their trash, which is still the typical method for garbage disposal in Singapore - dumping it, unseparated, down a garbage chute.

The government recently introduced new regulations for household waste to address a recycling rate that has stagnated. New private apartment blocks must now be built with a separate chute for recyclable waste. But the authorities have been reluctant to pressure the big supermarket chains to reduce plastic bag use.

Singapore goes through about 2.5 billion plastic bags every year, equivalent to about 450 per person, per year.

Paul Yew Shen, president of the Singapore Plastics Federation, said that any move by supermarket chains to stop serving plastic bags would hurt the competitiveness of the retail industry.

“Singapore is a first world country. Our citizens can’t be expected to carry small items with their bare hands,” he said.