In this investigative piece, Sara Schonhardt travels to the Sumatran forests to take a close look at the controversial palm oil industry - and how companies, such as Cargill, are feeling the pressure to reform.

On supermarket shelves around the globe, packages of biscuits, bars of soap and cleaning agents rely on an ingredient that is increasingly tied to rainforest clearing, land conflict and the loss of vital habitats for rare orangutans, tigers and elephants.

The ingredient is palm oil, and demand for it is growing largely because it does not contain unhealthy trans-fats, has a long shelf life, and yields more oil per hectare at a much lower cost than canola or soybean oil.

“Oil palm is a very efficient crop,” says Anthony Yeow, the president director of PT Hindoli, an Indonesian subsidiary of US-based Cargill, one of the world’s largest private agricultural companies.

The company, like many others in the sector, is aggressively expanding to take advantage of rising demand – and Yeow says that is good for people and the economy. “We kill the competition,” he says.

But the industry also has a reputation for killing natural forests and, in the process, the animals that depend on them. As non-profit groups like Greenpeace and Rainforest Action Network (RAN) have raised awareness about the impact the industry is having on the environment, company executives say they are feeling the pressure to adopt better business practices.

“The pressure on the palm oil industry, Cargill feels that,” says John Hartmann, the chief operating officer at Cargill Tropical Palm Holdings in Singapore. “Cargill is a major player in vegetable oils and so we have a responsibility also to prove our sustainability credentials.”

Under pressure?
In recent years, several major palm oil and pulp and paper companies have declared bold plans to stop deforestation from happening within their concessions.

Asia Pulp & Paper, a subsidiary of the Sinar Mas conglomerate, and one of the world’s largest pulp and paper companies, said in February that it would immediately put a stop to clearing natural forests throughout its supply chain and would rely entirely on replanted timber to feed its operations.

Sinar Mas’ palm oil arm, Gold Agri Resources (GAR), has also agreed to turn around its operations after targeted campaigns by Greenpeace led several major buyers, including Nestle, to sever their supply contracts with the company.

There is starting to be dramatically more pressure from consumers and that’s part of the reason you’re starting to see these changes.

In 2011, GAR said it would eliminate deforestation from all of its operations and move toward a zero deforestation footprint. It has made notable progress since, with Greenpeace calling it an example of how the palm oil industry can protect the environment while also ensuring economic growth.

APP’s commitment, on the other hand, has come under scrutiny, after a recent report by group of Indonesian NGOs said the company’s new policy “would save almost no forests in its main base of operations,” Sumatra. APP has called the allegations “unfounded.” But activists who had criticized APP for failing to live up to similar past promises to stop natural forest clearing, say the NGO report is a signal they are watching.

The public is also turning up the heat.

“There is starting to be dramatically more pressure from consumers and that’s part of the reason you’re starting to see these changes,” said Glenn Hurowitz, the director of campaigns at Washington, DC-based Climate Advisers.

Cargill, for example, accounts for around 15 percent of the global palm oil trade, according to Hurowitz. The palm oil it sells goes to companies that then use it to produce consumer goods, like biscuits. And those companies are telling Cargill, ‘we can’t sell palm oil that comes from deforestation,’ Hurowitz adds.

Better business practices
Company executives at Cargill’s plantation in South Sumatra say it makes sense for them to adopt sustainable practices, such as better plantation management and improved technology since it leads to increased yields, which boost company revenues.

At the same time, they say efforts to set environmental benchmarks and achieve high health and safety standards demonstrate that the company is not putting profit over sustainable development. 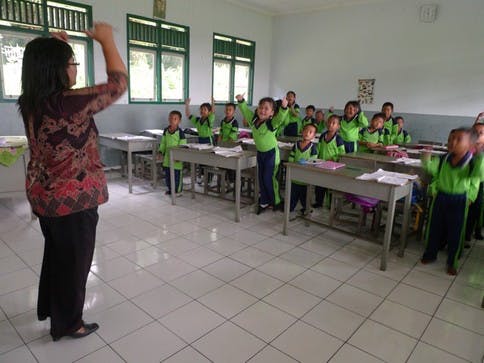 Elementary students at one of the two schools on the plantation sing to welcome visitors.

In addition, Cargill buys palm fruit bunches from small-hold farmers at government-set prices, in part to keep a lid on conflicts created when companies start land grabbing and fail to pass profits onto local producers.

Under the cooperation, Cargill plants the trees and trains farmers to develop their 2-hectare plots in line with requirements set out by the Roundtable on Sustainable Development, an industry trade group.

Around 8,800 farmers participate in the program, which they say provides them with higher yields and better incomes. In 2010, the company’s smallholders received RSPO certification. Cargill then marketed their certificates so they could receive money from them. In January 2012, the smallholders received the first payout of US$120,000 (Rp1.2 billion).

During a recent visit to the South Sumatra plantation, several farmers displayed pictures of how they had gone from riding bicycles to driving their own company vehicles and had built sturdy concrete homes in the place of wooden shanties.

In the sub-district surrounding Cargill’s operations there are now six banks, electronic stores, cafes and mini-markets.

Managers at nearby plantation companies say the success of Cargill’s smallholder program has become the envy of their farmers, and it is pushing them to adopt better business practices.

“We do want to follow them,” says Yus, the general manager at a plantation eight hours south of PT Hindoli, who preferred not to give his full name without corporate approval. “If we comply with everything it will cost us more, but the costs of trying to comply will be much lower than having to deal with social conflicts later.”

Just one side of the supply chain
PT Hindoli has not completely avoided controversy, however. Local conservation groups have recorded several cases where the company has been involved in disputes over land use and licensing.

A lack of transparency and traceability in palm oil supply chains remains a fundamental obstacle to preventing the worst of the worst violations associated with palm oil plantation expansion.

Yeow says the company has tried to dodge major communal conflicts by focusing its expansion on land that is problem free.

Cargill also says it is committed to protecting local communities under RSPO requirements. It is certified by both RSPO and ISPO, Indonesia’s own sustainable palm oil ratings system, but many NGOs and environmental advisers call RSPO and the GreenPalm certificates it sells mere green-washing.

“It has little to do with protecting forests or reducing greenhouse gas emissions,”says Hurowitz, who charges that the group’s criteria for certification is very narrow, noting that it continues to certify palm oil grown through destruction of secondary forest and peatland, which when disturbed releases harmful carbon emissions that contribute to climate change.

“If a company is serious about sustainable palm oil it should rely not on acronyms but on promises not to cut the rainforests,” he adds.

“A company has to make a target and a real commitment to solve social conflict, a commitment not to cut the forest and they have to apply free, prior and informed consent,” says Aidil Fitri, an advocate with Wahana Bumi Hijau, a local NGO south of Cargill’s plantation. “We don’t want to the oil palm industry to leave South Sumatra, but we want it working well.”

Transparency is critical
Cargill is currently planting trees on a 10,000-hectare swathe of land at its site in South Sumatra. Company executives say they expect the area to boost output by 13 percent, or 20,000 tons of crude palm oil by the middle of 2014. The company is also looking to acquire new concessions elsewhere in Sumatra and Sulawesi. 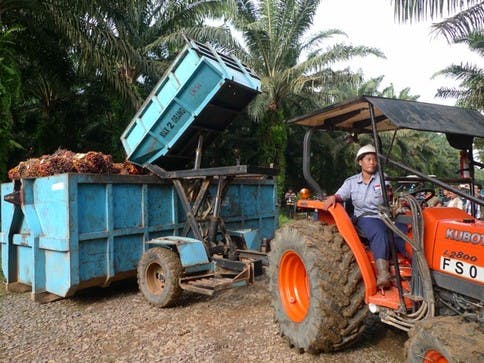 An employee dumps her collected fruit bunches into a trailer that will carry them to the mill for processing.

“We are always on the lookout for expansion,” says Yeow. During a recent tour of Cargill’s current operations, however, reporters were told the new development was too far and difficult to reach for a visit - this is precisely what worries environmentalists. “The main issue is not about how they manage current land, as where they are expanding,” says Hurowitz.

Groups like the RAN, are also quick to point out that the volume of palm oil the company derives from its site in South Sumatra is “a small drop in the bucket” of its global palm oil business. Less than 1 percent of the crude palm oil Cargill currently sources comes from its own plantations.

They are pushing Cargill to fully trace its supply chain and commit to ending purchases from companies whose palm oil plantations are expanding into high conservation value areas or deep peat.

“The fact is, Cargill cannot trace where much of the palm oil it sells comes from and therefore it cannot ensure customers its oil is not linked to rainforest clearing, land grabbing and species extinction,” said Lafcadio Cortesi, a campaigner at RAN.

In response, Cargill says it is going through a “transition.” Currently the company can provide segregated oil, which can be traced back to its site of origin. But Hartmann says they only provide the service upon special request because of the high cost associated with it.

In the interim, the company says that by 2015 it is committed to supplying its customers in Europe, the US, Canada, Australia and New Zealand with oil that is either RSPO certified or originates from smallholder growers.

The commitment will extend to all customers – including China and India – by 2020. About 90 percent of the palm oil the company currently buys comes from suppliers who are RSPO members (though being a member is a lesser distinction than being certified).

“China and India, these are the two countries that will change the landscape of sustainability,” says Yeow, referring to two of Cargill’s largest buyers. “If we want everybody to be producing sustainable palm oil, [we] should be working to get these two buyers to want to buy only certified oil.”

Environmental groups say this is not enough. “A lack of transparency and traceability in palm oil supply chains remains a fundamental obstacle to preventing the worst of the worst violations associated with palm oil plantation expansion,” says RAN.

Willing to work together
Some at Cargill say they are willing to work with conservationists to improve their image and show how they are trying to live up to better business practices.

“At some point there is a shifting of values and companies are believing that sustainability is the right way to go forward in the future,” says Hartmann.

As evidence of their transparency, company managers point to how after they realized they had cleared land outside PT Hindoli’s concession area they reported their breach to the authorities, who slapped the company with a US$1 million (Rp9.66 billion) fine. Cargill paid off the fine in February 2012.

Cargill also turned around its operations in Brazil after a 2003 Greenpeace campaign accused it of deforesting local rainforests.

“Cargill has shown that they can deliver deforestation-free goods in Brazil,” says Hurowitz, who notes that overall deforestation in that country has declined by about 75 percent, partly as a result of Cargill’s efforts.

Our hope, he says, is that Indonesia can become the next Brazil.