A new online database launched by US non-profits allows individuals to see if their investments and retirement funds are helping shore up unsustainable palm oil practices.

Individual and institutional investors in the United States can now easily check if their funds are supporting palm oil-linked tropical deforestation and land grabs, thanks to a new online transparency tool launched on Tuesday.

The Deforestation Free Funds database, developed by environmental group Friends of the Earth and corporate accountability non-profit As You Sow, allows users to check if the mutual funds which manage their investments and retirement plans, known as 401(k), are invested in the palm oil industry.

Users can search the database of 6,500 mutual funds and find out if a particular fund has investments in palm oil firms, the banks which finance these firms, or even consumer goods brands which use palm oil in their products. The palm oil industry has long been linked with rampant deforestation.

The database also offers users a way to contact their fund managers and demand deforestation-free investment options, and enables them to search for alternative funds which do not have links to deforestation.

Andrew Behar, chief executive officer of As You Sow, said in a statement that “investments in palm oil are embedded in our pension funds, individual retirement accounts (IRAs), and 401(k)s but most of us are not even aware of it”.

He added: “This web tool empowers investors to know exactly what they own so that they can pressure fund managers to implement sustainable investment policies and find investment options that support a forest-friendly future.”

While the current database only looks at companies with palm oil-linked investments, the organisations behind the project say they intend to expand it to other agricultural commodities in the future.

Palm oil is a ubiquitous commodity found in everything from food products to cosmetics and toiletries. The booming industry was worth US$61 billion in 2014, and has been widely linked to illegal deforestation and land grabs as some companies seize and clear land for new plantations.

While some companies have implemented sustainability measures such as applying zero-deforestation and anti-exploitation policies for their entire supply chains, campaigners argue that industrial palm oil is a generally destructive and exploitative sector. 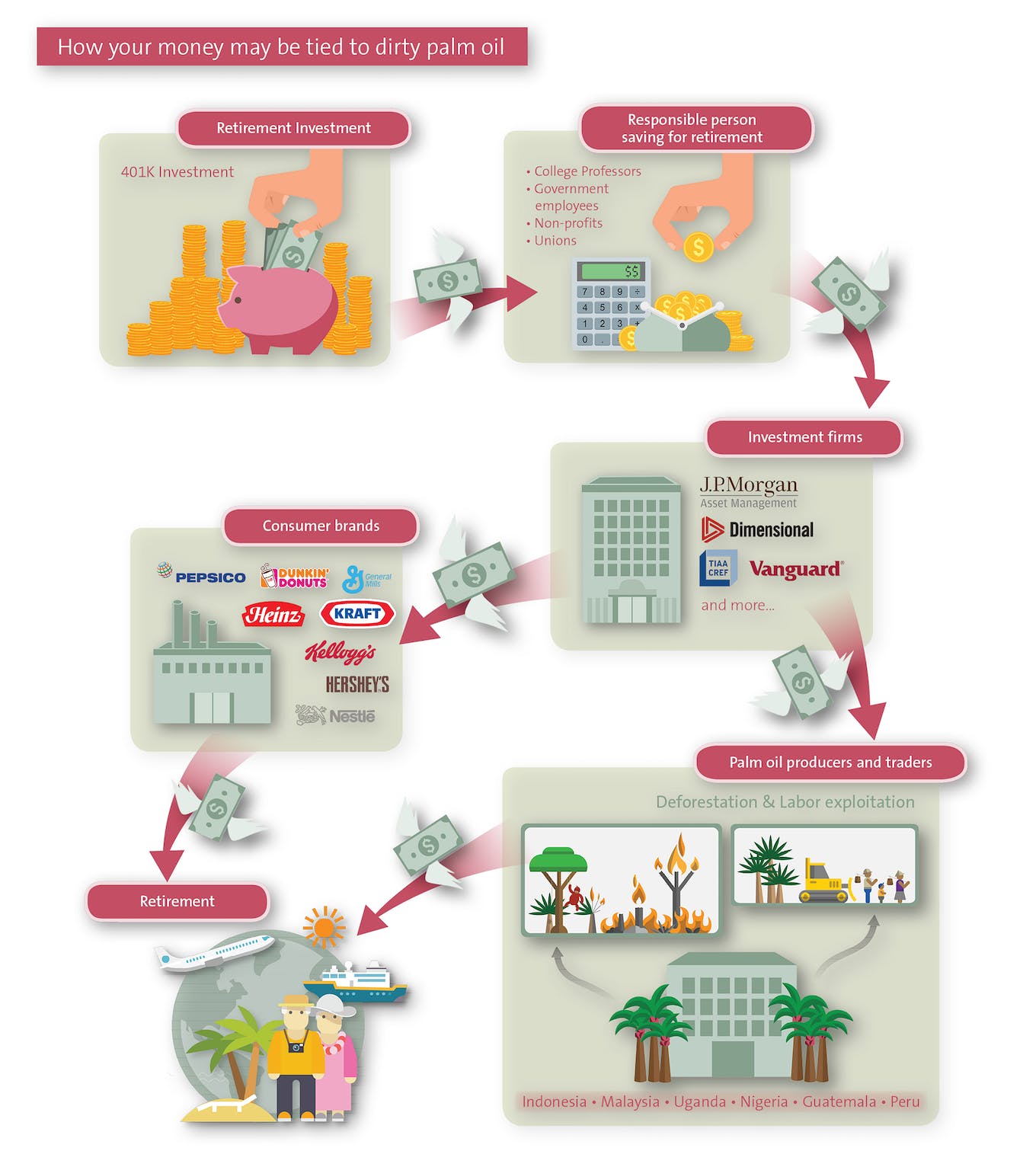 Infographic highlighting the links between US mutual funds and deforestation. Image: Friends of the Earth

They also add that about 10 per cent of the global palm oil industry is financed by equity investors and that currently, American mutual funds have about US$5 billion invested in palm oil producer firms.

While not all banks which lend to palm oil firms are guilty of driving deforestation, campaigners note that “all of them are at risk of driving rainforest destruction unless they are pressured to implement better practices”.

The groups behind the database also noted that the aim of the campaign is not to get investors to divest from palm oil firms, but to get individuals to pressure their fund managers to develop policies that discourage palm oil firms from clearing forests.

To shine a light on the links between financiers and palm oil firms, the database analyses each mutual fund and flags potentially risky stocks.

These include stocks issued by companies including a list of 40 palm oil growers, most of which are identified by Friends of the Earth as deforestation offenders; banks which green groups have said are involved in financing palm oil and other forest commodities; and consumer goods giants which are major buyers of palm oil.

The database’s creators acknowledge that many manufacturers are taking steps to reduce their deforestation risk. They added: “But we believe that more scrutiny can only help”.

Based on the extent of a mutual fund’s palm oil-related holdings, it is given a score of between A to F.

In addition to the database of scores, Friends of the Earth also launched a report titled Are You Invested in Exploitation?, which identifies the top US asset managers invested in palm oil production and recommends ways to make sure they are not driving deforestation or human rights abuses.

Among the financiers of palm oil named in the report were BlackRock, which has US$8.73 billion worth of stocks in palm oil production; Vanguard, which has US$1.88 billion invested in the industry; and JP Morgan Asset Management, with a US$581 million stake in the sector.

Investments in palm oil are embedded in our pension funds, individual retirement accounts (IRAs), and 401(k)s but most of us are not even aware of it

While the three firms had varying degrees of broad commitments to environmental, social, and governance (ESG) principles, none of them had explicit policies on making sure their assets were not involved in deforestation and land grabbing.

Investors must pursue a four-step strategy to rectify these shortfalls, said the organisation.

These include: to disclose their exposures to deforestation and land-related risks in palm oil and other commodities; commit to an investment policy that bans deforestation and land grabs, exclude firms which violate these rules; and repair any damage that has already been done by asking companies to set up accountability mechanisms and restore any ecological damage they have done.

Jeff Conant, a senior international forests programme manager at Friends of the Earth, said that “when Americans put their hard-earned money in savings and retirement accounts, they believe they are preparing for a better future”.

But large asset managers often undermine this future by investing in destructive agribusiness firms, he noted.