A satellite image released this week by NASA shows the extent of haze currently blanketing much of Southeast Asia.

The photo captures plumes of smoke emerging from fires burning in the peatlands of Sumatra and Indonesian Borneo. The smoke blows west into what looks like thick clouds over both islands as well as neighboring Singapore and Malaysia.

The fires are the source of much concern in the region. Choking haze is causing widespread hospitalizations, interfering with transportation, and inflaming political tensions between Indonesia and Singapore.

At the same time, the fires are releasing millions of tonnes of carbon into the atmosphere — 600 million tonnes according to the Global Fire Emissions Database.

While fires occur on an annual basis in Indonesia, they are especially bad this year due to dry El Nino conditions, which turn drained and deforested peatlands into a tinderbox.

But El Nino is no excuse — humans are responsible for both lighting fires and creating conditions that enable them to burn.

Over the past 30 years, millions of hectares of rainforests and peat swamps have been cleared and degraded, leaving scrub and dried peat that easily burns and is extremely difficult to extinguish once ignited. Much of the environmental degradation has been driven by logging and conversion for industrial oil palm and timber plantations. 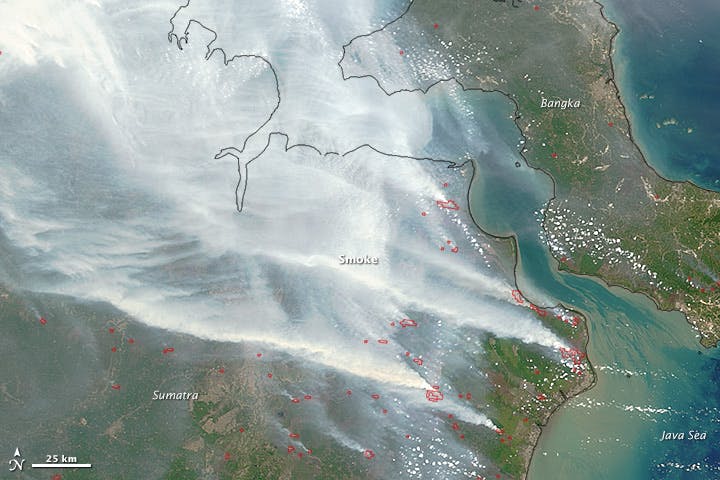 Today some of those companies are finding themselves in an uncomfortable position, under pressure from the Indonesian and Singaporean governments for fires burning in and around their concessions: Singapore has promised to levy significant fines against companies linked to haze-causing fires, while Indonesia has already made arrests at several companies.

Smallholders are also feeling the heat — some companies have blamed small palm oil developers for setting fires that have spread into concession areas.

The bad news is fires and haze may get worse before they get better. While the Indonesian government has asserted all the fires will be extinguished within a few weeks, scientists quoted by NASA say this year’s fires are pacing well ahead of anything seen since 1997-1998, when Indonesia’s fires were considered a global catastrophe.

“Conditions in Singapore and southeastern Sumatra are tracking close to 1997,” Robert Field, a Columbia University scientist based at NASA’s Goddard Institute for Space Studies, was quoted as saying.“If the forecasts for a longer dry season hold, this suggests 2015 will rank among the most severe events on record.”