Naomi Klein: We need a bigger leap than Paris talks

The deal struck at Paris will be "inadequate and not enough to keep us safe", said Canadian author and activist Naomi Klein at the sidelines of COP 21. The global community needs to make a radical leap towards a sustainable and just economy.

Canadian author and activist Naomi Klein has called on the global community to make a “leap forward” to embrace policies that simultaneously tackle climate change, economic inequality, and human rights, among other pressing issues.

Speaking at The People’s Climate Summit in Paris, a civil society-led conference held in parallel to the UN climate summit this week, Klein told the 500-strong audience that “the deal that will come out of this summit will be inadequate, and is not one that can keep us safe”.

This is not only because it will fail to limit global temperature rise to the level deemed safe by international scientists, it also won’t be legally binding and have no penalties for countries that fail to stick to their promised cuts, she said.

While activists will continue to lobby for stronger climate action, Klein suggested that governments implement policies that promote a just and sustainable economy.

While contemporary economic systems feature extensive natural resource extraction, fossil fuel burning and labour abuses, the economy of the future “is based on caring for one another and the earth,” noted Klein, author of ‘This Changes Everything: Capitalism vs the Climate’. 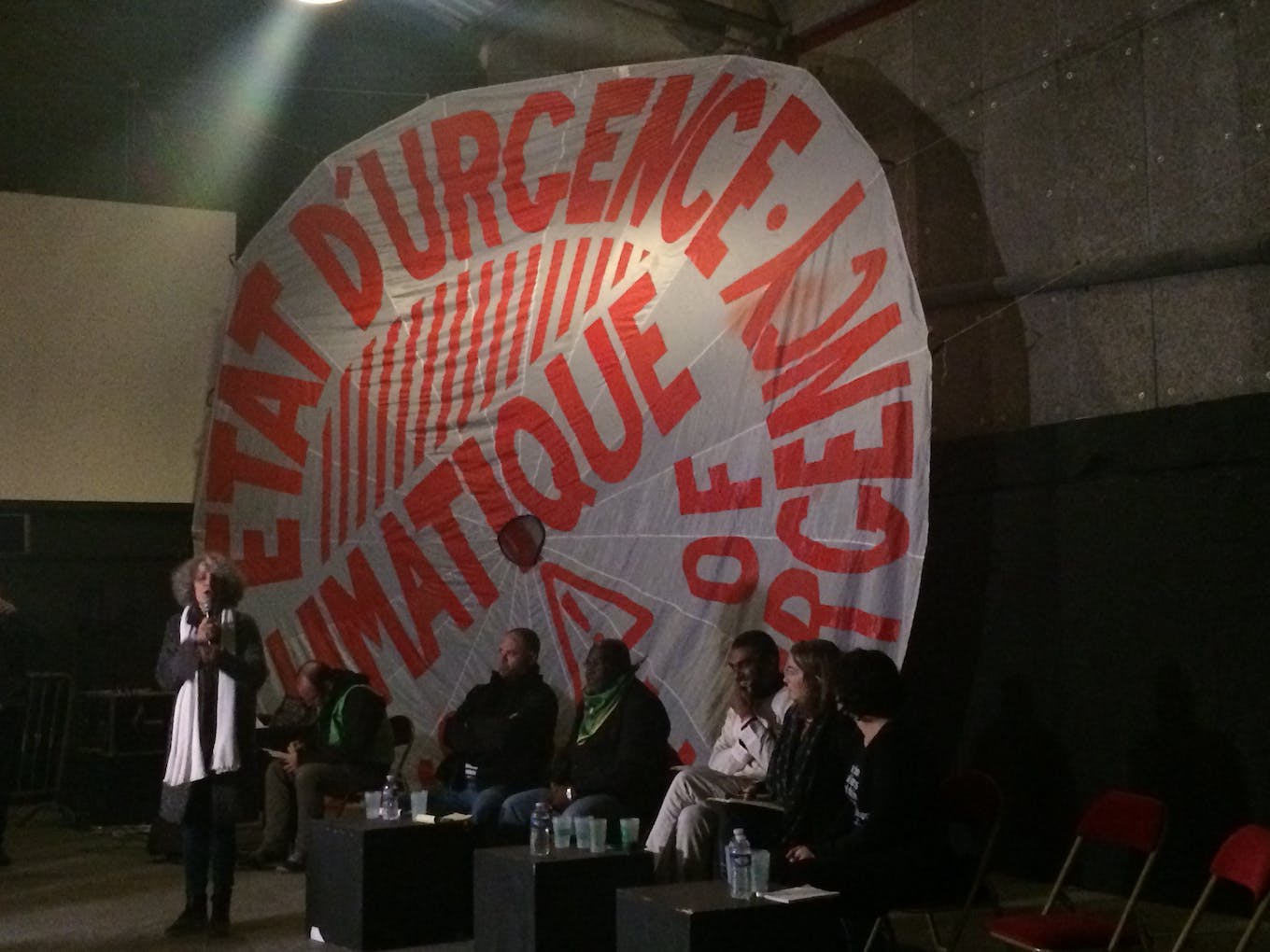 A panel discussion at the People’s Climate Summit in Paris, France, on Sunday. Among the speakers are Naomi Klein, author and activist and Kumi Naidoo, executive director, Greenpeace International.  Image: Eco-Business

A vision of how Canada would look like under this new system is outlined in the ‘Leap Manifesto‘, a policy document jointly created by groups from the environmental, labour, anti-poverty, gender equality, indigenous rights movements, and more.

Launched in September, the document presents recommendations to shape a Canada which is sustainable, equitable, prosperous and socially just, said Klein.

It recognises that indigenous communities are crucial caretakers of the planet, and that their knowledge is valuable to sustainable resource and land management.

But even as these jobs are created, workers’ rights must be protected and those who lose their jobs in polluting sectors should receive assistance in finding new, clean jobs, she noted.

A green economy also entails expanding the sectors of society that are already low carbon, said Klein. Occupations such as caregiving, teaching, and the arts are low-carbon, climate jobs.

She suggested that even as austerity measures in many countries threaten to cut funding for these essential services, green policies such as a carbon tax or increased royalties on fossil fuel extraction can provide the funds necessary to support these jobs.

It is possible to have policies that solve racism and inequality, all while radically bringing down emissions.

The Leap Manifesto also recognises climate change as one of the key drivers of involuntary migration, and urges the Canadian government to welcome refugees and migrants escaping unliveable conditions.

“We live in a time of multiple crises,” Klein said. “Different social movements have to share a coherent vision, with climate at the centre of their agendas”.

“It is possible to have policies that solve racism and inequality, all while radically bringing down emissions,” said Klein. “We have a roadmap, and this is the work to be done after COP 21”.

She shared that the Leap Manifesto is named after the extra day added to the calendar every four years. This extra day, introduced to sync the Gregorian calendar with the Earth’s rotation, is a good metaphor for how human systems must change to adapt to nature, she added.

Klein urged people to craft similarly ambitious manifestos for their own countries, and launch them on February 29 next year.

Also speaking at the event, Kumi Naidoo, executive director of Greenpeace International, echoed the need for individuals and communities to voice the need for sustainable change.

For example, if workers’ trade unions were invested in fossil fuels, they could ask them to divest and support renewable energy projects, he said.

But governments must also do their bit to scale up climate targets, said Naidoo. For one thing, the 2 deg C target might save countries in Europe and North America, but still lead to widespread damage in the low-lying island states of the Pacific and Caribbean, as well as poor countries  like Bangladesh and African nations.

“We urge policymakers to use a target of 1.5 deg C instead,” said Naidoo. “The agreement also needs to be reviewed every five years with the possibility of scaling up ambition”.