Meat that's not meat: The next big opportunity for food

Intensively farmed livestock has a significant negative environmental and social impact. As consumers increasingly recognise this, there is a huge opportunity for companies to provide more sustainable and ethical alternatives to animal protein.

As consumers across the world become more conscious of the impact of meat consumption on climate change and human health, companies should tap on the huge economic opportunity in pursuing plant-based alternatives to animal proteins, a new report has found.

Titled ‘Plant-based profits: Investment risks and opportunities in sustainable food systems‘ and released on Tuesday, the report was commissioned by the Farm Animal Investment Risk & Return (FAIRR) group, a coalition of 57 investors, which aims to highlight environmental, social, and governance issues (ESG) related to factory farming. The investors which back the report have a total of US$2.4 trillion of assets under management.

The report identified various ESG risks associated with livestock production, such as its carbon footprint, contribution to antibiotic resistance, and food safety scandals. As a result, the practice is incompatible with many of the United Nations’ Sustainable Development Goals—the development agenda adopted by the global community in 2015—the report argued.

It showed that the market for foods which use plant-based ingredients to emulate meat is set to grow by more than 8 per cent in the next four years and could be worth US$5.2 billion by 2020.

Innovative food companies that are already benefiting from this trend include the ‘Impossible Burger’, a cultured meat—that is, meat grown in a laboratory—product by California-based Impossible Foods, and cultured meat start-up Memphis Meats. The former company has attracted US$250 million of funding from investors including Singapore sovereign wealth fund Temasek and Hong Kong-based Horizon Ventures, while the latter counts food giants like Cargill among its investors. 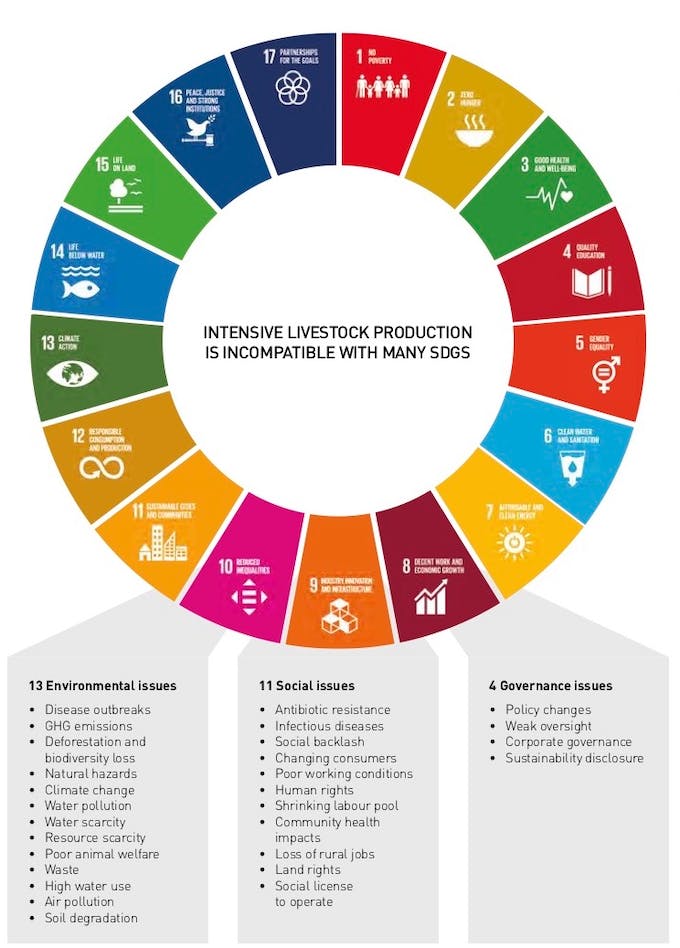 But when it comes to bigger food manufacturers and retailers, FAIRR saw mixed results in how 16 multinationals from Europe and North America are pursuing more sustainable proteins. Companies surveyed include Nestle, Unilever, Marks & Spencer, Tesco, and Walmart.

The good news is, all companies have developed at least one house-brand alternative protein product, the report found.

Jeremy Coller, founder of the FAIRR Initiative, said this trend was significant, and showed that alternative proteins are rapidly going mainstream.

“This trend is driven by the inability of the global meat industry to manage the environmental, public health and animal welfare challenges that the world’s current demand for animal protein creates; and that is generating remarkable opportunities for food companies and their shareholders,” he said.

Companies leading the shift towards plant-based proteins include Swiss multinational Nestlé and United Kingdom-based supermarket chain Tesco, according to the report.

Tesco was lauded for having a target to reduce emissions from livestock supply chains by 15 per cent by 2030 and acknowledging that plant-based diets were an important part of this strategy.

The company is also engaging consumers to create demand for alternatives to meat protein with a range of 20 ready meals that use plant-based protein. The meals are developed by a well-known celebrity chef, and have reportedly gained traction not just among vegans but also the wider market.

Nestle, meanwhile, also has targets to reduce indirect emissions in its supply chain—known in sustainability reporting language as Scope 3 emissions—by 8 per cent between 2014 and 2020.

In the near future we will see protein production without the animal, with a step change in efficiency, for a fraction of the cost and with far fewer adverse impacts.

There is no direct mention of agriculture in this target, but Nestle has acknowledged the need for sustainable protein consumption to investors, and has an internal research and development unit which focuses on protein innovation.

Both companies were also commended for giving detailed answers to the FAIRR investor coalition.

On the other hand, American multinationals Costco and Whole Foods were called out for not responding adequately to FAIRR’s queries; Costco also failed to recognise protein diversification as an issue that will have a tangible adverse impact on the company’s bottom line, the report said.

Rosie Wardle, a FAIRR spokesperson, told Eco-Business that these trends would make a dent in the upward curve of global meat consumption, which is expected to rise from about 300,000 million tonnes in 2016 to about 370,000 million tonnes by 2026. According to research firm Technavio, the global market for processed meat is projected to be worth US$1,059.5 billion by 2021, making it more than 200 times bigger than the plant-based market by that year.

“We have a confluence of factors here, which together make meaningful change compelling and unavoidable,” said Wardle. A growing trend towards meat-free and flexitarian diets is a marked shift from purchasing habits of the past, she added.

This, combined with sustainability concerns in the meat industry, makes it clear that business-as-usual is not an option, said Wardle.

Also taking into account the new and innovative options emerging in the plant-based proteins sector, “in the near future we will see protein production without the animal, with a step change in efficiency, for a fraction of the cost and with far fewer adverse impacts,” said Wardle.

She added: “This will fundamentally disrupt the growth of the conventional meat market.”