Graphic shows scale of ‘One Belt, One Road’ investment plans, as accompanying report outlines how China can limit major damage to the environment outside its borders.

The past year has seen China greatly expand its overseas engagement by supporting new financial institutions, such as the Asian Infrastructure Investment Bank (AIIB), which challenge the so-called Bretton Woods system, and by announcing big  trade, investment and resources extraction initiatives under the “One Belt, One Road” strategy.

The former reflects the lack of progress in expanding China’s role in international organisations, such as the World Bank and IMF, which appear increasingly unrepresentative.

The latter suggests not only a newly-assertive foreign policy, but also a desire to shift some of China’s overcapacity to new markets in the “new normal”, which is a period of slowing growth that China hopes will see a structural shift towards higher-quality, sustainable development.

In this changing context – and a global economy in which China’s slowdown has had a big impact on commodity markets – a new report, from two of the UK and China’s most influential think-tanks, looks at China’s growing role in global governance.

It also makes recommendations for policymakers looking to understand the country’s more active role in the energy, metals and minerals sectors. 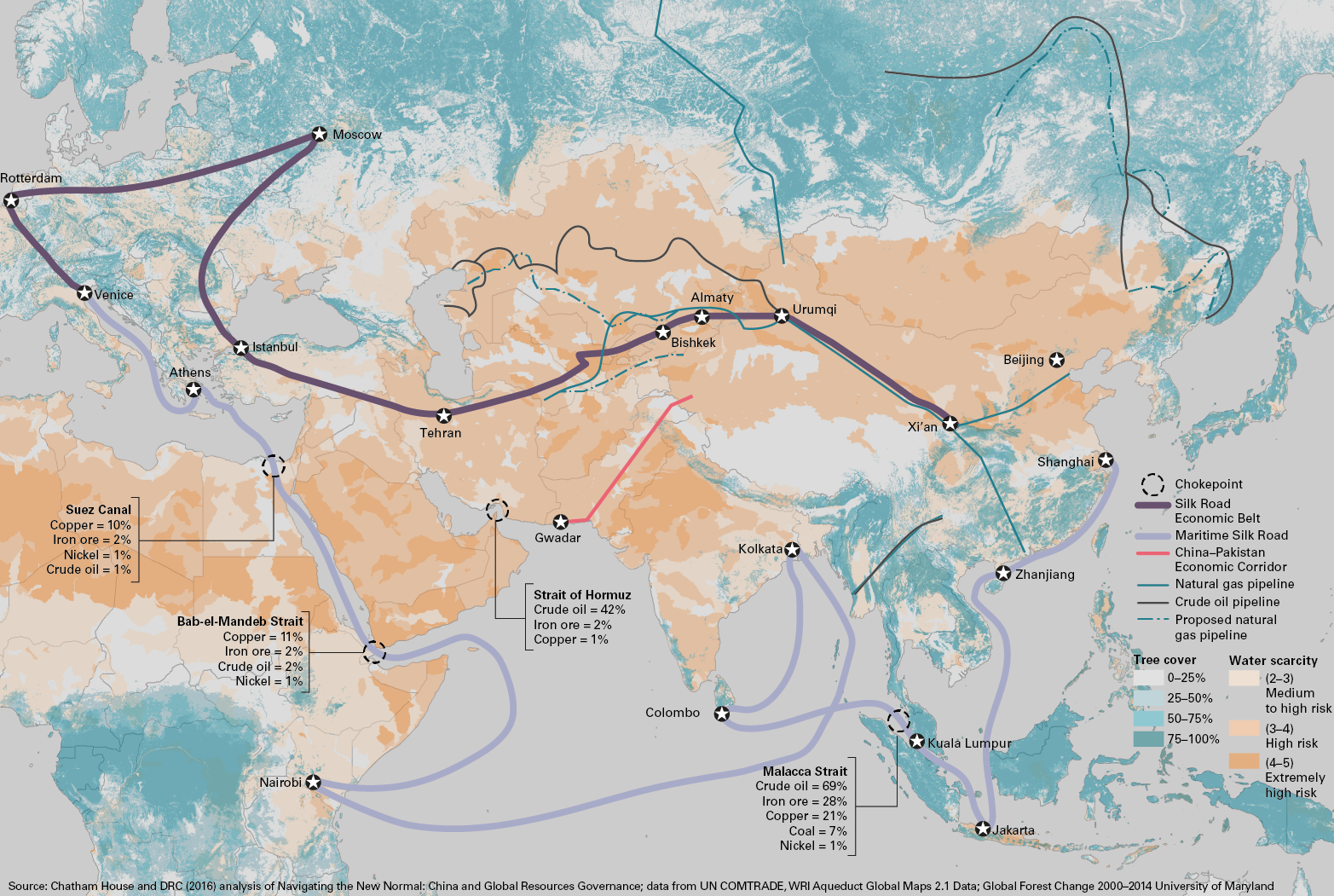 This map shows the breadth and scale of China’s plans for ‘new silk roads’, including extensive transport and logistical links by land and sea. These will enable greater trade of raw materials and manufactured goods between China and the rest of Asia, and with Europe and Africa.

“Navigating the New Normal: China and Global Resource Governance“, by Chatham House and the Development Research Center of the State Council, finds that current market conditions – with lower prices and thus reduced tensions over resources – may present a “window of opportunity” for international governance reforms.

Furthermore, it suggests that China, this year’s G20 chair, the world’s largest consumer and trader of resources and a rising power with an increasing sphere of influence, is well placed to help progress towards a more effective global resource governance regime.

What might that look like? The report recommends China can take an active role in creating new high-level fora for dialogue; in making arrangements with producer countries to avoid damaging export restrictions; and by helping emerging economies develop enhanced structures for “early warning” of possible trade disputes over resources.

It also recommends China consider joining the Extractive Industries Transparency Initiative (EITI) to demonstrate international best practice in terms of governance within its companies, and that its firms adopt enhanced environmental monitoring and reporting, including along the new Silk Road routes.

The full recommendations, and much more, can be read in the report online, available for download here in English and Chinese. Above, we have reproduced the report’s map of the Belt and Road scheme. This is not only a crucial guide to understanding China’s new trade and investment plans and its impact on energy and resources, but also one that here has been overlaid with closely interrelated water and forest data.

In the context of environmental degradation, climate change, and China’s new push for an “ecological civilisation” in the “new normal”–which the report notes is also the global economy’s new normal–such a picture will only become more important.