Forest Trends found “notable progress” has been made to cut deforestation out of global commodities supply chains, but has issued a report that highlights a number of trends that the group says are cause for concern as they demonstrate the current limitations of voluntary commodity commitments.

Halting deforestation was a major topic of discussion at the Paris climate talks last December, so much so that the UN’s program for Reducing Emissions from Deforestation and forest Degradation (REDD+) was included as a standalone article in the final agreement passed by more than 190 countries.

During the talks, many companies got in on the action, as well, pledging to do their part to reduce carbon emissions from their business operations. Among them were several that produce, buy, or sell commodities like beef, palm oil, soy, and wood products (including timber, pulp, and paper) that are often associated with deforestation.

But adopting a new sourcing policy is one thing, and implementing it is entirely another, as a new report from Washington, D.C.-based nonprofit Forest Trends that looks at those corporate commitments to deforestation-free commodities supply chains makes clear.

Ambitious corporate action is a critical prerequisite to achieving deforestation-free commodity agriculture. But ambition alone is no substitute for accuracy and transparency, and commitments count the most when companies publicly disclose progress toward achieving them.

Forest Trends found “notable progress” has been made to cut deforestation out of global commodities supply chains, but the report highlights a number of trends that the group says are cause for concern as they demonstrate the current limitations of voluntary commodity commitments.

Out of 566 companies that collectively represent $7.3 trillion in market capitalisation and were identified by Forest Trends as having some deforestation risk from at least one of those four commodities in their supply chains, 366 have committed to sustainable sourcing.

“The disparity is alarming because it is estimated that cattle production causes 10 times more deforestation than palm,” according to the report.

Indeed, a study published last December in the journal Environmental Research Letters largely backs this assertion up, as it found that beef was responsible for 65 per cent of tropical deforestation between 2001 and 2009, followed by soy at 16 per cent and palm oil and timbre products at 10 per cent apiece.

Perhaps unsurprisingly, Forest Trends also found that large public companies are far more likely to have made a commitment to root out deforestation from their supply chains than small private companies, as the bigger, publicly traded firms face greater scrutiny and pressure and are held to higher standards of disclosure by financial institutions.

“Most of the [large, publicly traded companies] companies that have made such commitments are headquartered in North America and Europe, far away from the commodity-related deforestation,” the report added.

The good news is that companies that operate “upstream,” such as producers, processors, and traders, are more likely to have made commitments than “downstream” companies, which include manufacturers and retailers.

The group found that current disclosure requirements are insufficient pretty much across the board, however, as only one in three companies that have made a commitment to go deforestation-free have reported quantifiable progress toward their goals. Even among companies that set deadlines that have already passed for achieving important milestones, less than half have publicly disclosed their progress. 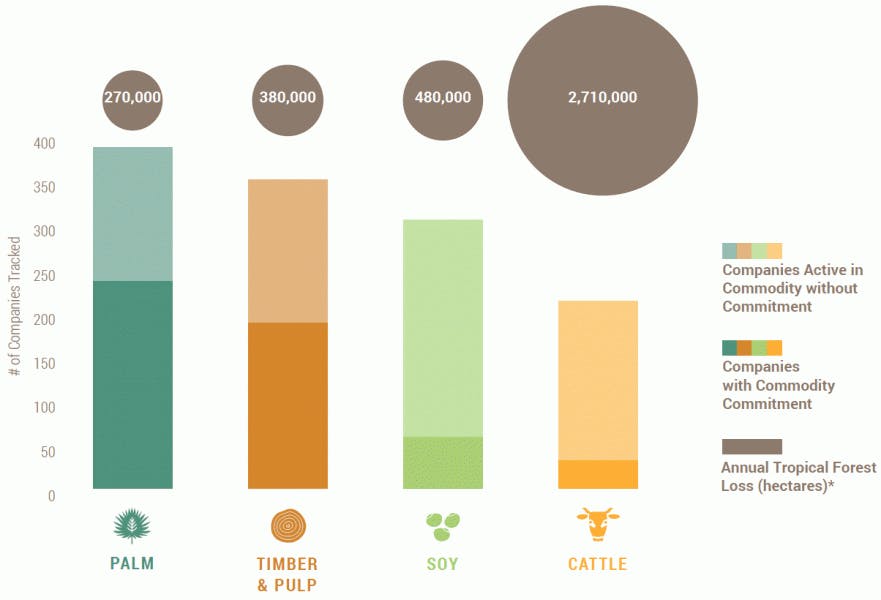 “Negotiators from nearly 200 governments adopted the Paris Climate Agreement in December, and they did so with massive support from the private sector backed by hundreds of pledges to end practices that destroy forests for the sake of palm, soy, cattle, and timber & pulp,” Forest Trends’ Founding President and CEO Michael Jenkins said in a statement.

“Ambitious corporate action is a critical prerequisite to achieving deforestation-free commodity agriculture. But ambition alone is no substitute for accuracy and transparency, and commitments count the most when companies publicly disclose progress toward achieving them.”