The moratoriums could save about 75,000 hectares of forest, but implementation details are lacking and the company's operations are still rife with environmental and social problems, say campaigners.

This is in addition to a November moratorium by Korindo subsidiary PT Tunas Sawaerma Group that would protect about 44,600 ha of forest in its concessions.

“The implementation of moratorium (sic) is in strict accordance with recent developments in Indonesia in relation to the national forest conservation agenda and including the national moratorium announced on new concessions”, read the announcement, printed in Indonesian newspapers on December 1.

“We will actively engage with the company’s stakeholders in consultation sessions, which include local and national government employees, business partners, and the local communities at the operational area,” the statement continued.

The PT PAL and PT GMM moratoriums cover 40,500 hectares of land. Of this, United States campaign group Mighty estimates that about 30,400 ha is forest that will be saved from destruction.

Deborah Lapidus, campaign director, Mighty, said in a blog post that “this is a very welcome development that, if implemented, buys time for the 75,000 hectares of forests remaining in Korindo’s palm oil concessions.” 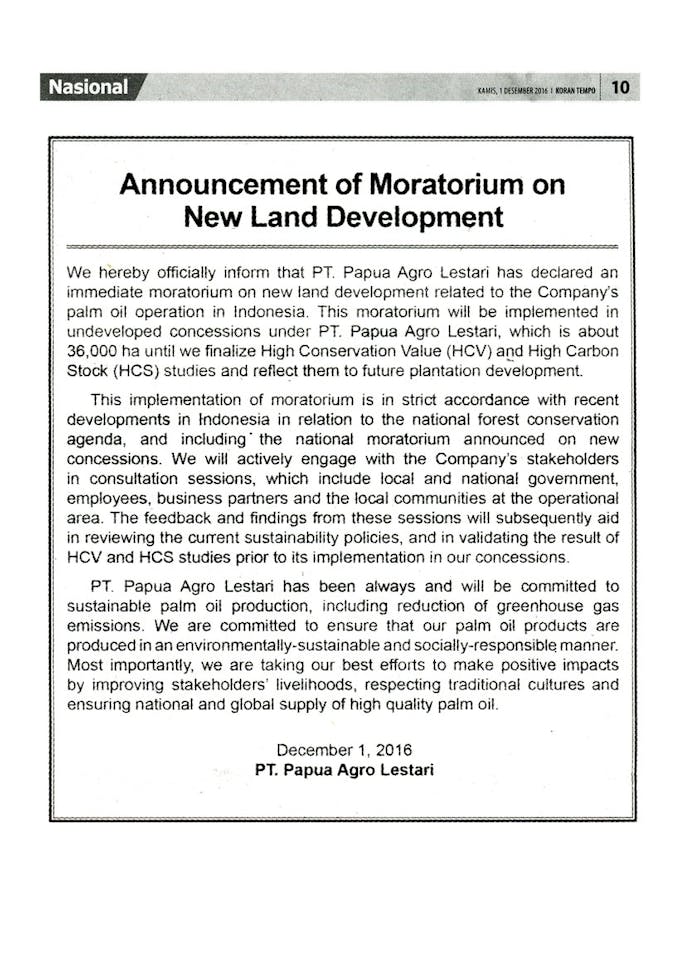 Through field investigations, the groups documented widespread environmental and human rights violations, and claimed that despite Korindo’s unethical practices, palm oil giants such as Wilmar, Musim Mas and IOI were continuing to buy palm oil from the conglomerate.

Their report sparked a government investigation into Korindo’s activities, and also prompted firms such as Wilmar and Musim Mas to terminate their commercial relationships with the company.

Responding to the moratorium announcement, Musim Mas announced that it will “continue to engage and support the Korindo Group in achieving sustainable development and operations”.

While the company did not explicitly say whether or not it has resumed buying from Korindo, it said it uses a method known as “controlled purchase” for its suppliers. This entails buying from companies when they show progress on sustainability commitments, and halting purchases when they stagnate.

In addition to the moratoriums, Korindo has also informed Mighty that it plans to join the Roundtable on Sustainable Palm Oil, the industry association for certifying responsibly produced palm oil.

But despite these steps, several issues remain unresolved, said Lapidus.

First, there is no clear indication of how Korindo will implement its moratorium, and the methods it will use to assess the conservation value of its land.

Green groups and companies last year agreed on a process known as the High Carbon Stock Approach to differentiate between land where clearance was acceptable and areas that should be conserved. But Korindo has not indicated that it will comply with this method.

It is also unclear if Korindo will engage credible assessors to conduct the land evaluations, get the findings independently verified, or make the results public.

Korindo continues to lack transparency, which makes it impossible to know whether it is following through on its commitments.

Lapidus also pointed out that Korindo’s plywood and logging businesses are not covered by its forest protection commitments, and it continues to operate on the customary lands of indigenous communities in the country’s North Maluku region without proper processes to register and resolve grievances.

Lastly, Korindo has not taken any steps to address its decades of environmental harm by restoring or rehabilitating landscapes, said Lapidus.

A Korindo executive did not respond to Eco-Business’s queries on how the moratorium will be implemented and its plans to expand the forest clearance ban to its other commodities by the time of publication.

“Korindo continues to lack transparency, which makes it impossible to know whether it is following through on its commitments,” said Lapidus.

She added: “Rather than its current piecemeal approach, Korindo should codify its commitments into a comprehensive group-level, cross-commodity policy, developed through stakeholder engagement.”

“We are going to continue our campaign until Korindo commits to protecting forests from any kind of destruction, whether it’s for palm oil, timber, or plywood,” Lapidus told Eco-Business.

For now, buyers and investors should be aware that Korindo is still far from meeting the benchmark for responsible production, she noted.

“Doing business with Korindo still entails a high risk of being associated with deforestation,” said Lapidus.

Korindo responded to Eco-Business on January 14 with the below statement. :

We have completed our HCS and HCV assessments, all of which were carried out by independent HCV Licensed Assessors (ALS) and HCSA Trained Assessors. We have also made the report available for public by sharing the results on the website of one of our subsidiaries, PT Tunas Suwaerma (www.tse.co.id).

As part of our company policies as well as to meet Indonesian legal requirements, we have conducted HCV assessments and Environmental Effect Assessments before any land development, including palm and timber. We also work with third parties such as Indonesia Sustainable Palm Oil (ISPO) and the Forest Stewardship Council to ensure that our operations meet their standards, where appropriate.

The HCV Resource Network Secretariat has issued a statement noting that while Korindo has claimed to have engaged licensed assessors to carry out HCV assessments and made them public on the PT Tunas Suwaerma website, the information available on the website is inadequate. The HCV Resource Network notes that only a one-page summary is available, and does not include the names of the licensed assessors.

It added: “The Secretariat is investigating the case and will take the appropriate action against the assessors, if our investigation concludes they have breached the conditions of their licence.” The Secretariat’s full statement can be accessed here.