According to data released on Wednesday by the National Oceanic and Atmospheric Administration (NOAA), July 2016 was the hottest July on record.

According to data released on Wednesday by the National Oceanic and Atmospheric Administration (NOAA), July 2016 was the hottest July on record.

It followed the hottest June on record and the hottest May on record. In fact, it was the 15th record-breaking month in a row, going all the way back to May 2015, NOAA data shows.

NASA, which uses different measures than NOAA to track global temperatures, has July as just the 10th consecutive hottest month, going back to October 2015 — which also happened to be the first month in NASA’s dataset that was more than 1˚C warmer than the 1950 to 1980 global average.

But July, no matter how you measure it, didn’t just keep the streak alive. Gavin Schmidt, director of NASA’s Goddard Institute for Space Studies, reported that it was “absolutely the hottest month since the instrumental records began.”

Schmidt told Climate Central that he expects July to be the last record-breaking month of 2016, because the residual heat from the exceptionally strong El Niño event that Earth has been experiencing is expected to dissipate now that the El Niño was declared over in June.

Though the El Niño certainly exacerbated global warming, Climate Central explains why it should not be viewed as responsible for Earth’s hot streak: “While El Niño provided a boost to global temperatures this year, the bulk of the heat is what has been trapped by accumulating greenhouse gases in the atmosphere.” 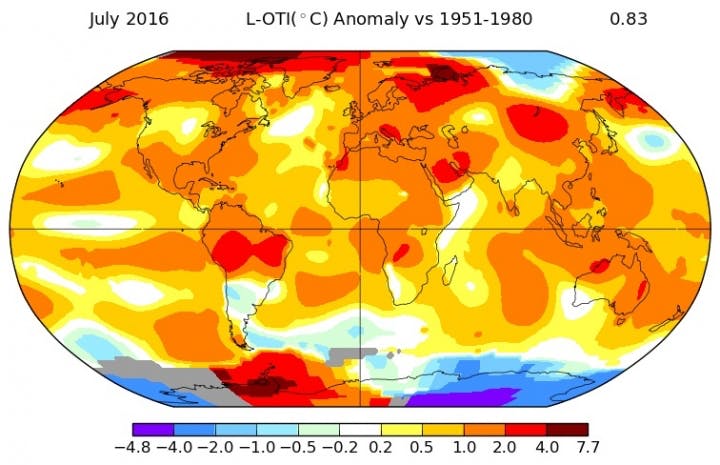 This map shows how global temperatures deviated from the average in July 2016. Image Credit: NASA.