Japan's record-high heatwave in July last year killed more than a thousand people, and this is a scary trend that could continue in the next decades as rising global temperatures become the new normal, scientists warn.

The record-breaking 2018 summer heatwave in Japan in which more than 1,000 people died “could not have happened without human-induced global warming”, a study finds.

And the extreme heat felt in Japan last summer could “become a usual situation” within the next few decades as temperatures continue to rise, the authors say.

The research is the latest in “attribution science”, a field that aims to quantify the “fingerprint” of climate change on extreme weather events, such as heatwaves, floods and droughts.

It follows analysis published in December which found that climate change made the UK 2018 summer heatwave up to 30 times more likely.

The study is “very interesting”, but requires “further confirmation” before its conclusions can be fully accepted, a leading attribution scientist tells Carbon Brief.

Last year’s summer heatwave across many parts of the Northern Hemisphere made headlines worldwide. The heat broke temperature records from Belfast to Denver and drove wildfires in places such as Sweden, Greece and California.

In Japan, temperatures reached a record high of 41.1C in July. Early reports at the time suggested that dozens had died in the record-breaking weather. The Japanese government later reported that 1,032 people died during the month-long period.

The new study assesses the extent to which human-caused climate change could have boosted the odds of such a heatwave occuring. The results are published in Scientific Online Letters on the Atmosphere, a journal published by the Meteorological Society of Japan.

It also assesses the extent to which natural changes to the weather could have influenced the odds of such a heatwave.

During the event, two high-pressure systems were stacked on top of each other in the troposphere, explains study lead author Dr Yukiko Imada, a senior researcher at the Japan Meteorological Agency. She tells Carbon Brief:

To work out the extent to which global warming could have boosted the chances of such a heatwave, the authors used a climate model to compare the chances of the heatwave happening in today’s world to a hypothetical world without climate change. 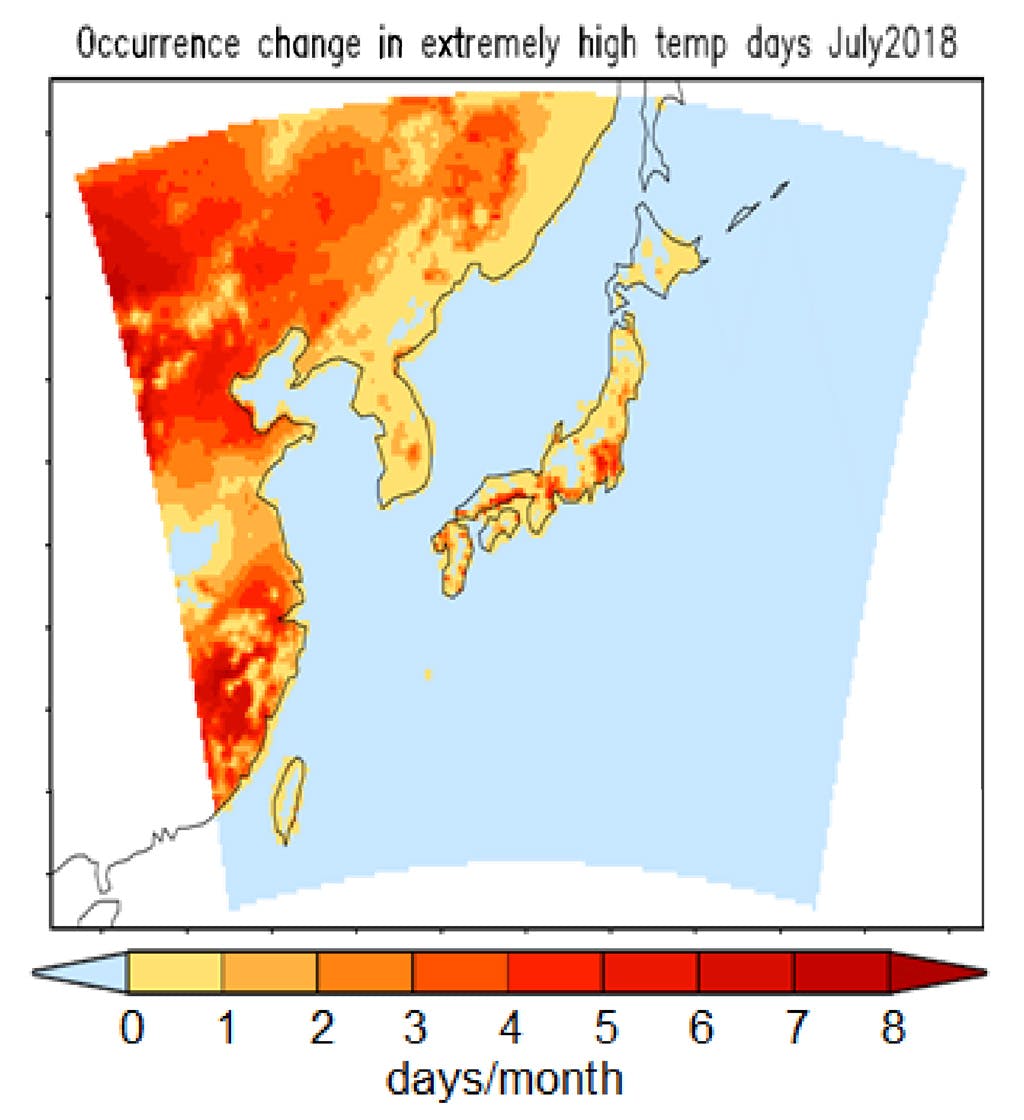 The researchers then studied the simulations to see how often heatwaves on the same scale to that seen in 2018 occur in both the “real” world and the world without global warming.

The map below, which is taken from the study, gives a breakdown of the results at different points across Japan.

The map shows that global warming has caused “a pronounced increase in extremely hot days in the populated areas of Japan”, including Tokyo, the authors say in their research paper.

The researchers also used statistical methods to study how the two-tiered high-pressure system could have influenced the odds of such a heatwave.

They find that the weather system at least doubled the chances of such extreme heat occurring.

The chart below, which is taken from the study, gives a picture of how both global warming and the two-tiered high-pressure system influenced the odds of such a heatwave. 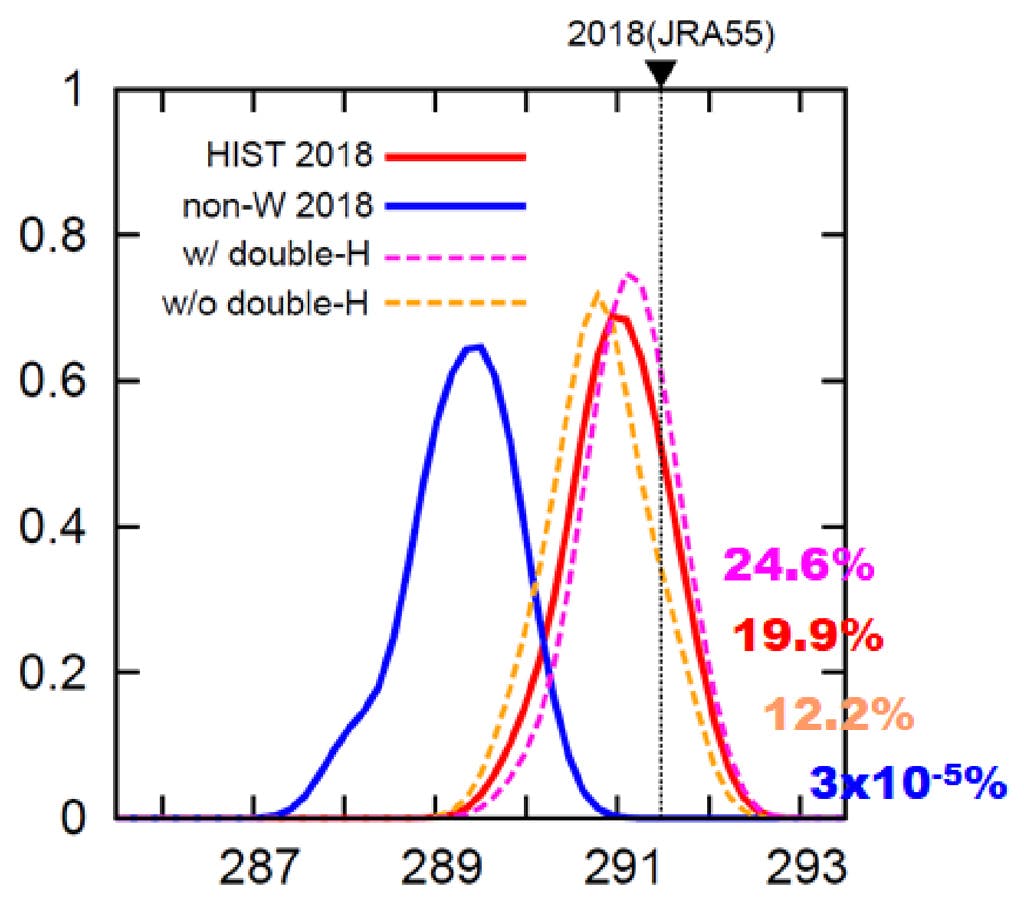 The chart shows that, in today’s world, such a heatwave has around a one-in-five (19.9 per cent) chance of happening. This rises to around a one-in-four chance (24.6 per cent) when the chances of a two-tiered high-pressure weather system are also factored in.

The chances of such a heatwave happening a world without global warming are so small as to be almost negligible, the chart shows.

If warming reaches 2C, the number of extremely hot July days per year could rise to 4.8, the authors add.

The findings are the “latest in a series of studies” that show that “some temperature extremes at country level would be essentially impossible were it not for the effects of human-induced climate change”, says Prof Peter Stott, a leading attribution scientist from the Met Office Hadley Centre, who was not involved in the study. He tells Carbon Brief:

“Their conclusion that the heatwave event ‘would never have happened without anthropogenic global warming’ does depend heavily on the reliability of the model they use. In particular, it depends on the mean human-induced temperature change for Japan that they calculate from the model—which they estimate to be almost 2C.

“The reliability of the model is little discussed in the paper so it is hard to know whether the model is accurately representing temperature changes and variability in Japan. For that reason, I would say that this is a very interesting preliminary result that needs further confirmation before we could be confident that such extreme temperatures really would be impossible without climate change.”

It may be too soon to conclude that such a heatwave would not have occurred without climate change, but the study’s results do fit well with the global picture of how climate change is influencing heatwaves, adds Prof Sonia Seneviratne, a researcher of climate extremes from ETH Zurich. She tells Carbon Brief:

“Because the results are based on a single model and on a finite, but large, number of simulations, we cannot fully exclude at the moment that a single realisation with a different model could display such extreme conditions in Japan under pre-industrial climate conditions.

“But this seems extremely unlikely given the large temperature anomalies that were observed in the country—and given the very large and demonstrated effects of increasing CO2 in amplifying temperature extremes across the world. This is even less likely when considering the event in the context of all the heatwaves that occurred in the northern hemisphere during that summer.”