Eco-Business recently visited Asia Pulp and Paper’s newly built pulp mill in South Sumatra, a US$2.6 billion beast that environmentalists fear will eventually eat into natural forest when the supply of plantation wood runs out. Here are some scenes from the ground.

If there is a single event this year that might worry anyone who has witnessed Southeast Asia’s annual haze pollution, it is the firing up of a new pulp mill in South Sumatra at the start of this year.

The US$2.6 billion China Development Bank-funded facility at Ogan Komering Ilir (OKI) sprawls across 2,800 hectares of what was once a palm oil plantation. It is the third pulp mill in Sumatra to be built by Singapore-headquartered paper giant Asia Pulp and Paper (APP), and by some way the largest.

Although approval for the mill was granted back in 2003, the facility has prompted a number of protests over the years. International green groups say that as a result of demand from the OKI mill, APP will default on a public promise made four years ago to stop clearing natural rainforest.

Meanwhile, local community groups say that the mill has been built without proper consultation and respect for their land rights, and will mean a repeat of the “corporate crimes” of APP’s checkered past.

For its part, APP insists that it has not cut down a single tree from a natural forest since making its zero deforestation pledge four years ago, and has more than enough plantation wood to feed the mill, which it claims has created 10,000 local jobs.

At the same time, the company has been quietly ramping up the mill’s production capacity. It opened the second of two pulp lines in May, and aims to have the facility running at 85 per cent capacity by the end of the year.

Will the mill deliver the benefits it has promised without destroying the region’s forests or violating the rights of its people? Or is it an ecologic and human rights disaster in the making? Eco-Business recently visited OKI mill to take a closer look at the structure on which so much of the future of South Sumatra, its people and environment may depend. 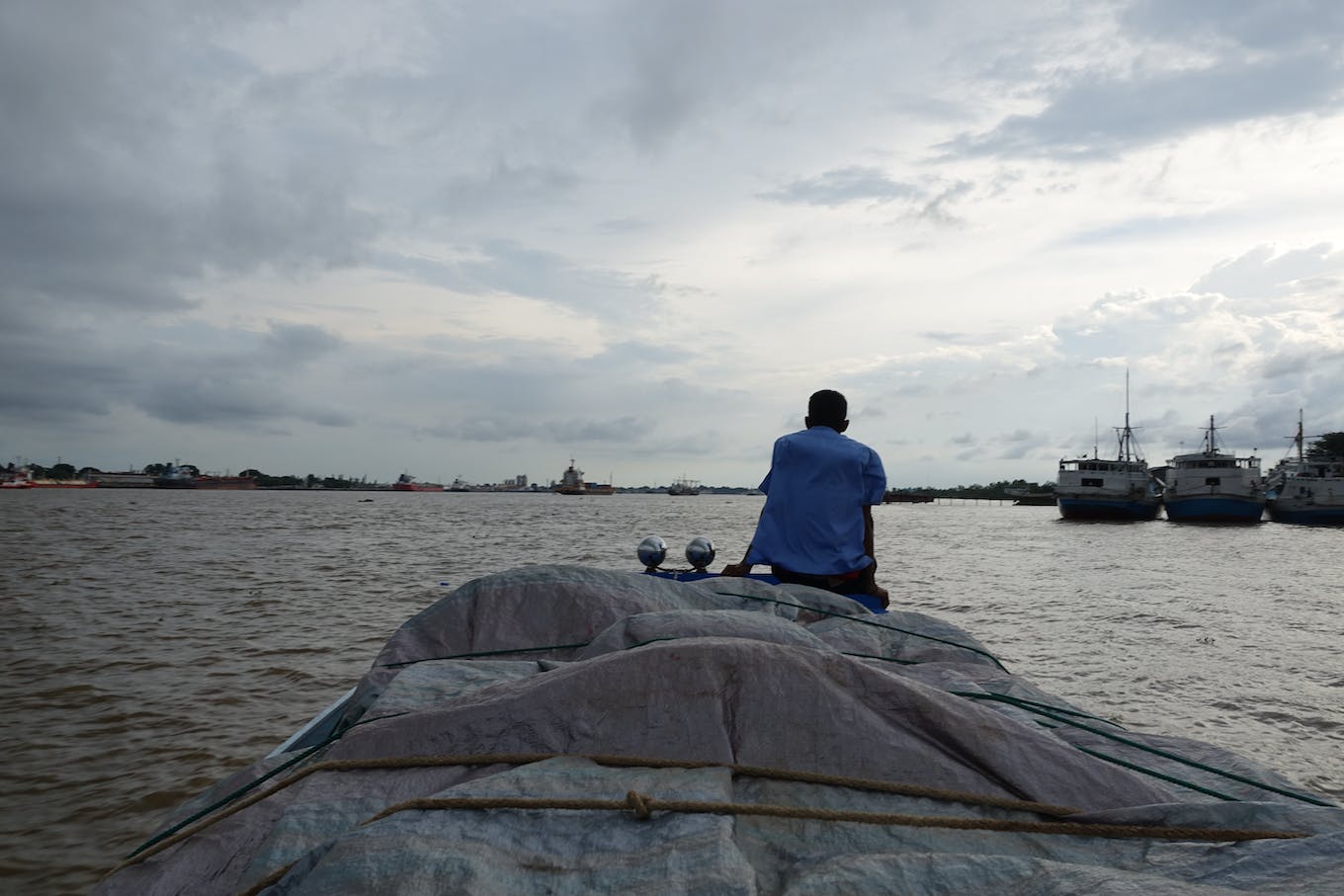 The captain of a speedboat ferrying cargo and staff to and from OKI mill eyes the horizon of the busy Musi River near Palembang, the provincial capital of South Sumatra 81 kilometres from the mill. The mighty Musi is a major artery for Indonesia’s trade in petroleum, rubber, palm oil and pulp and paper. 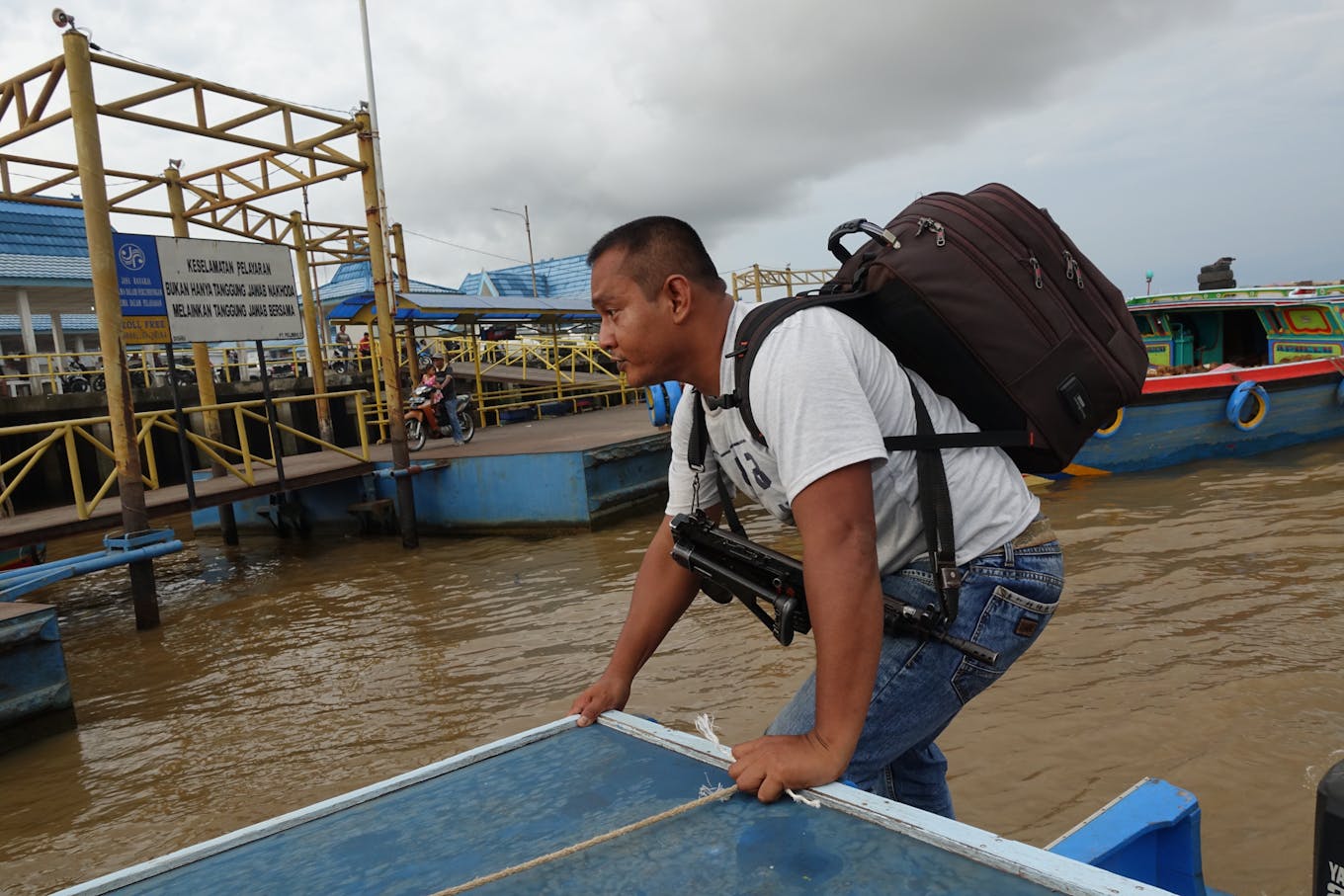 A man carrying an automatic weapon disembarks OKI mill’s passenger speedboat just before the main port of Palembang. The boat was full of armed men believed to be security forces working for the mill. 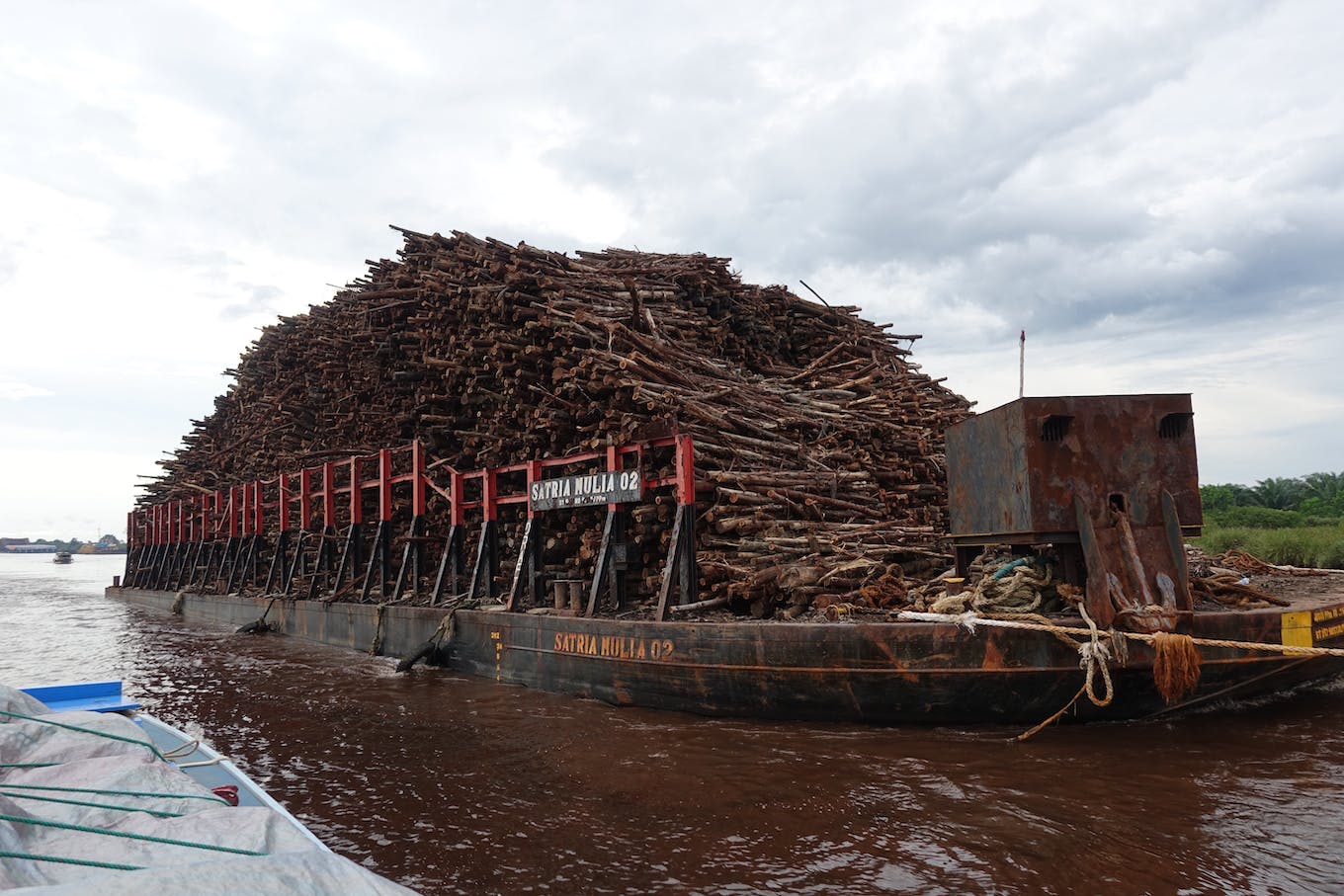 A log barge is pulled up river on the way to OKI mill. Around one third of the mill’s wood supply is currently transported by river. Logs from plantations across Sumatra travel travel distances of up to 260 kilometres by boat, a journey that can take as long as five days. 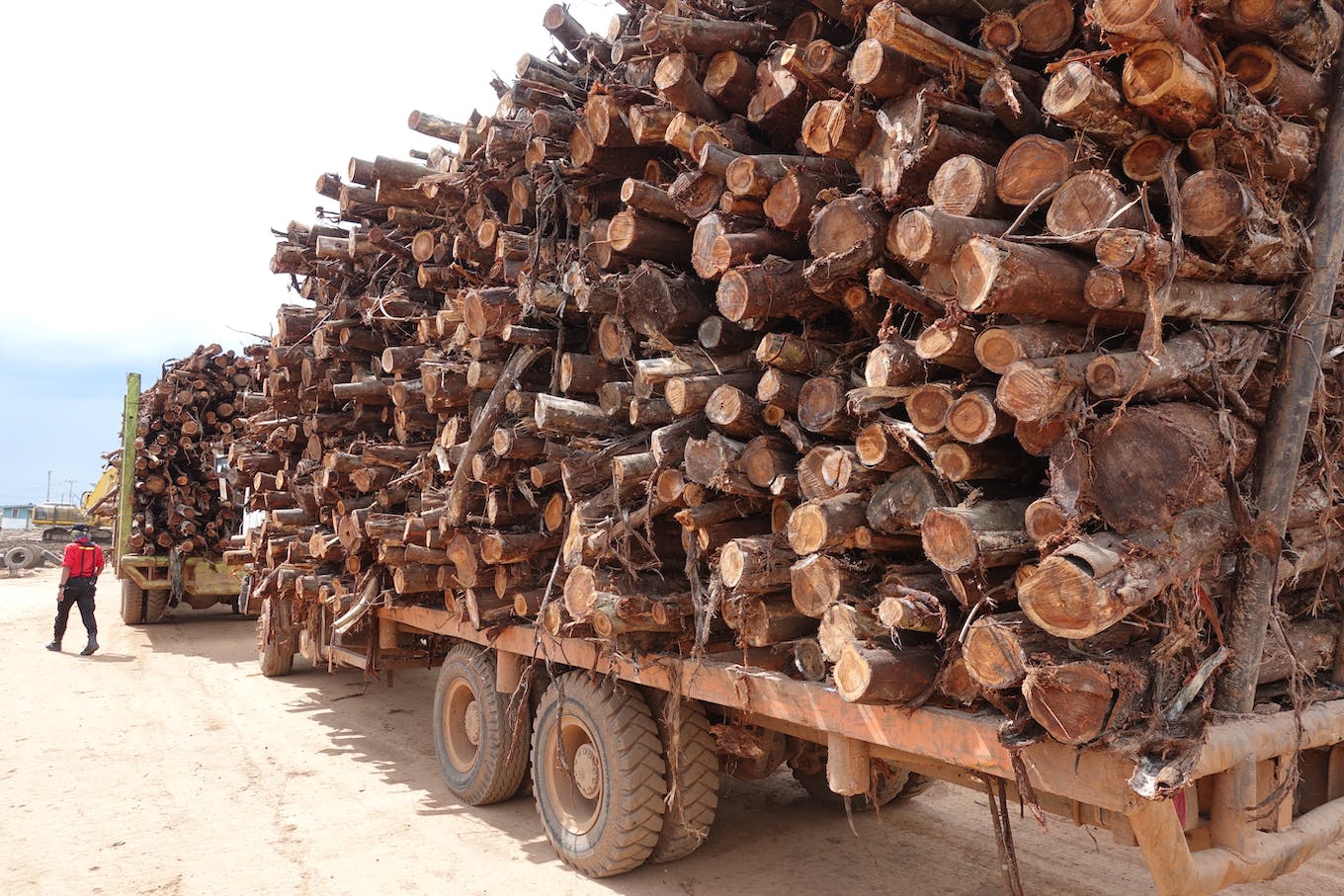 A log truck. An average of 524 trucks arrive at the mill every day, around the clock, each carrying around 33 tonnes of wood fiber from plantations around South Sumatra. Over the longer term, APP says it will source wood from 38 supplier concessions in four other provinces in Indonesia; Riau, Jambi, West Kalimantan and East Kalimantan. 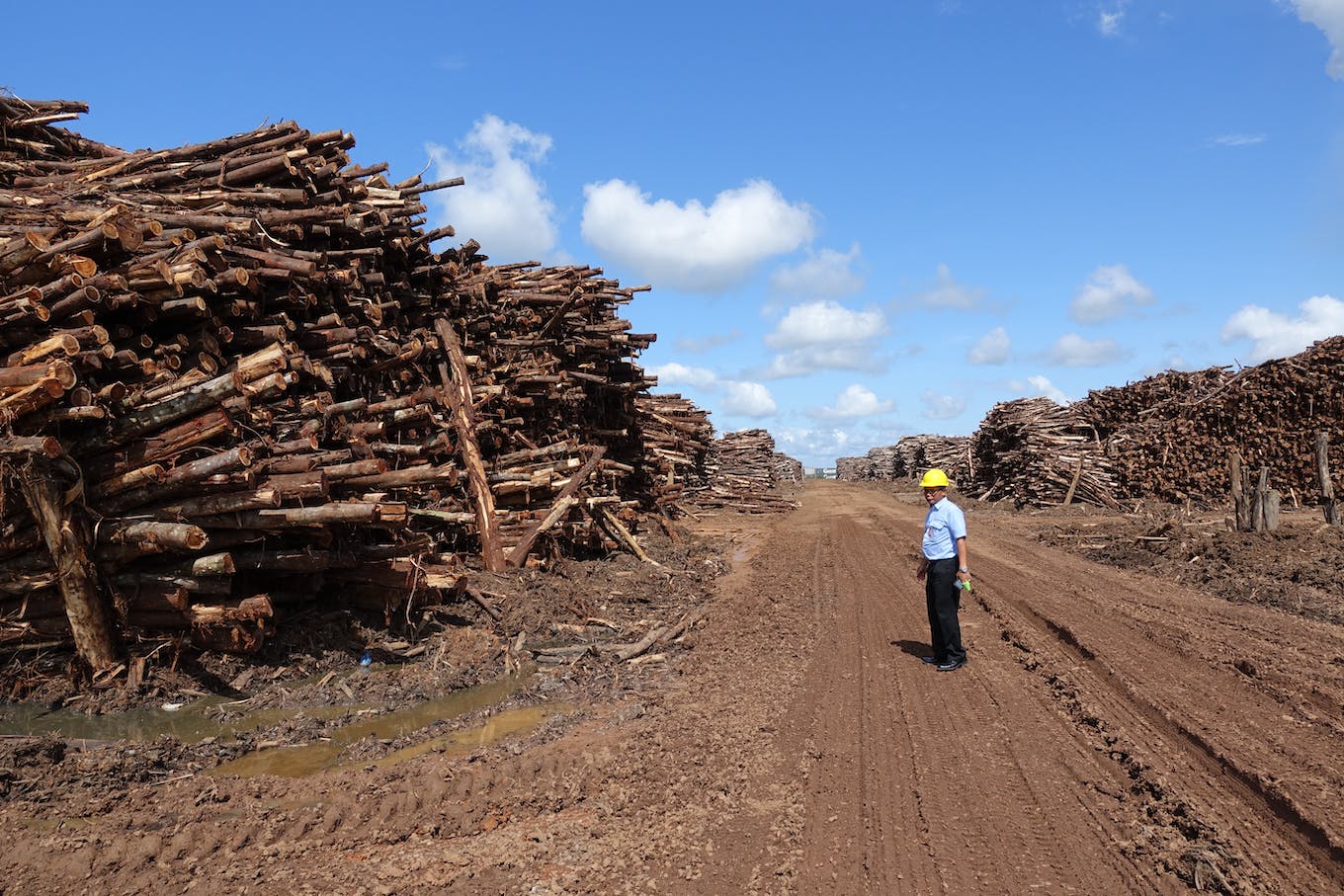 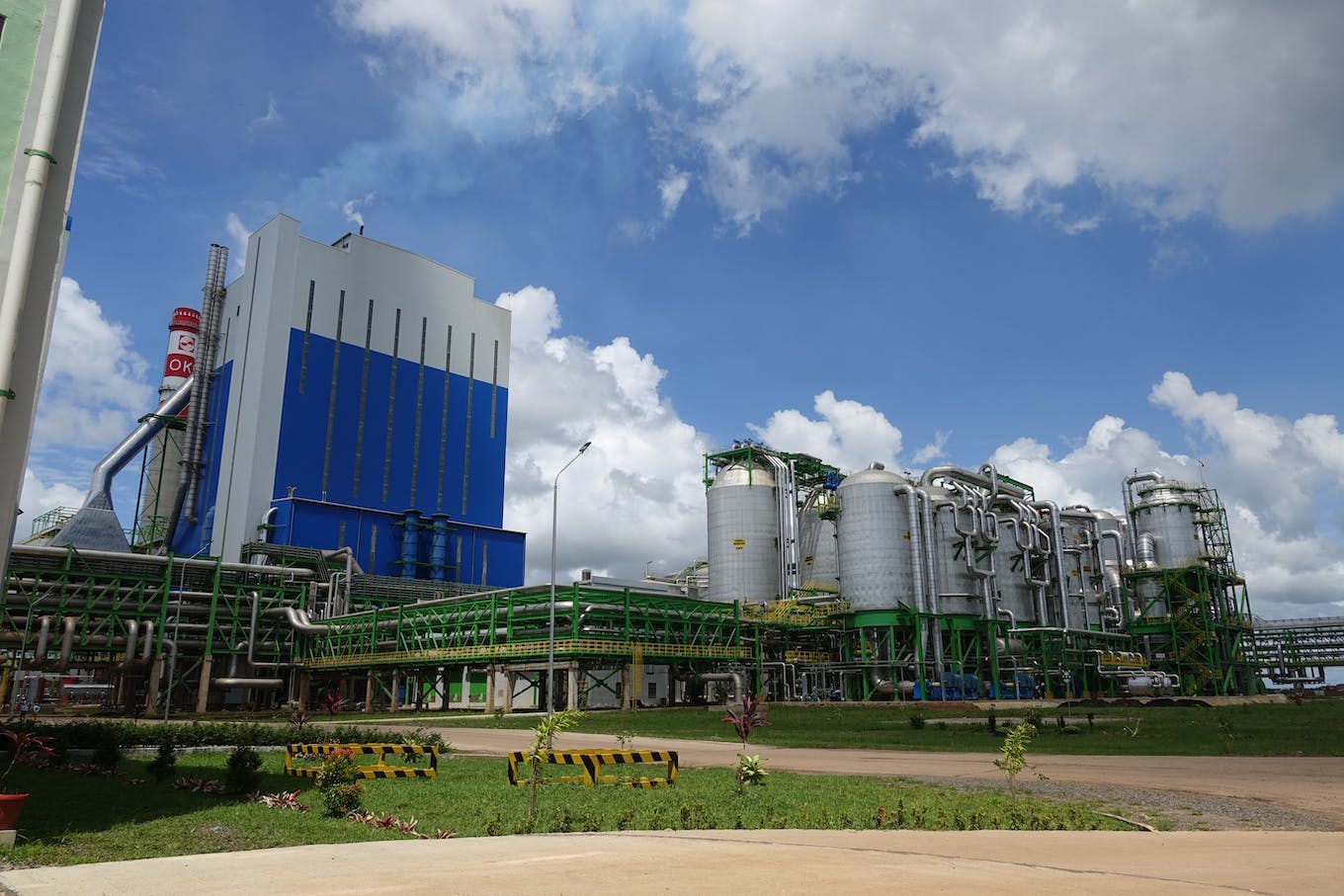 The blue building on the left is a power boiler capable of producing 8,000 tonnes of steam per hour by burning bark removed from the trees as fuel.

Near the power boiler is OKI mill’s claim to fame - the world’s largest recovery boiler. It burns 12,000 tonnes of solid lignin - the waste product from digesting pulp - a day, and can produce more than 2,030 tonnes of steam per hour, generating 338 megawatts of electricity to power the mill.

Another part of the mill’s sustainability story is the bark gasifier, which has reduced consumption of fossil fuel by 80 per cent by re-using the methane gas released from the burning bark for energy production. 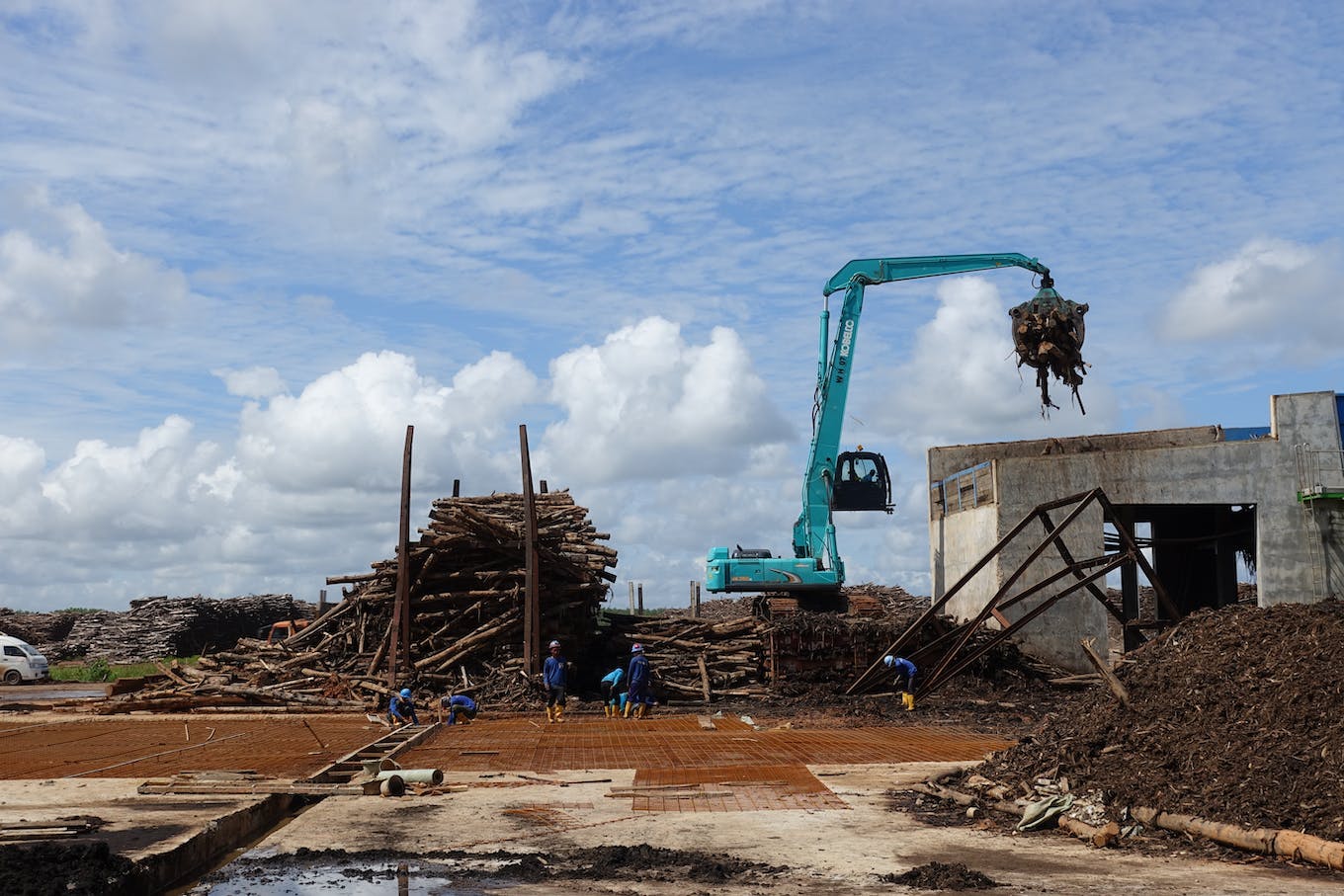 Workers toiling in 40 degrees-Celsius heat during the Ramadan fasting season fix a flooring section of a loading bay in the mill. Most of the mill’s 2,100 workers are from Indonesia, but around 170 are from overseas, mainly China—where APP has major operations—and India. 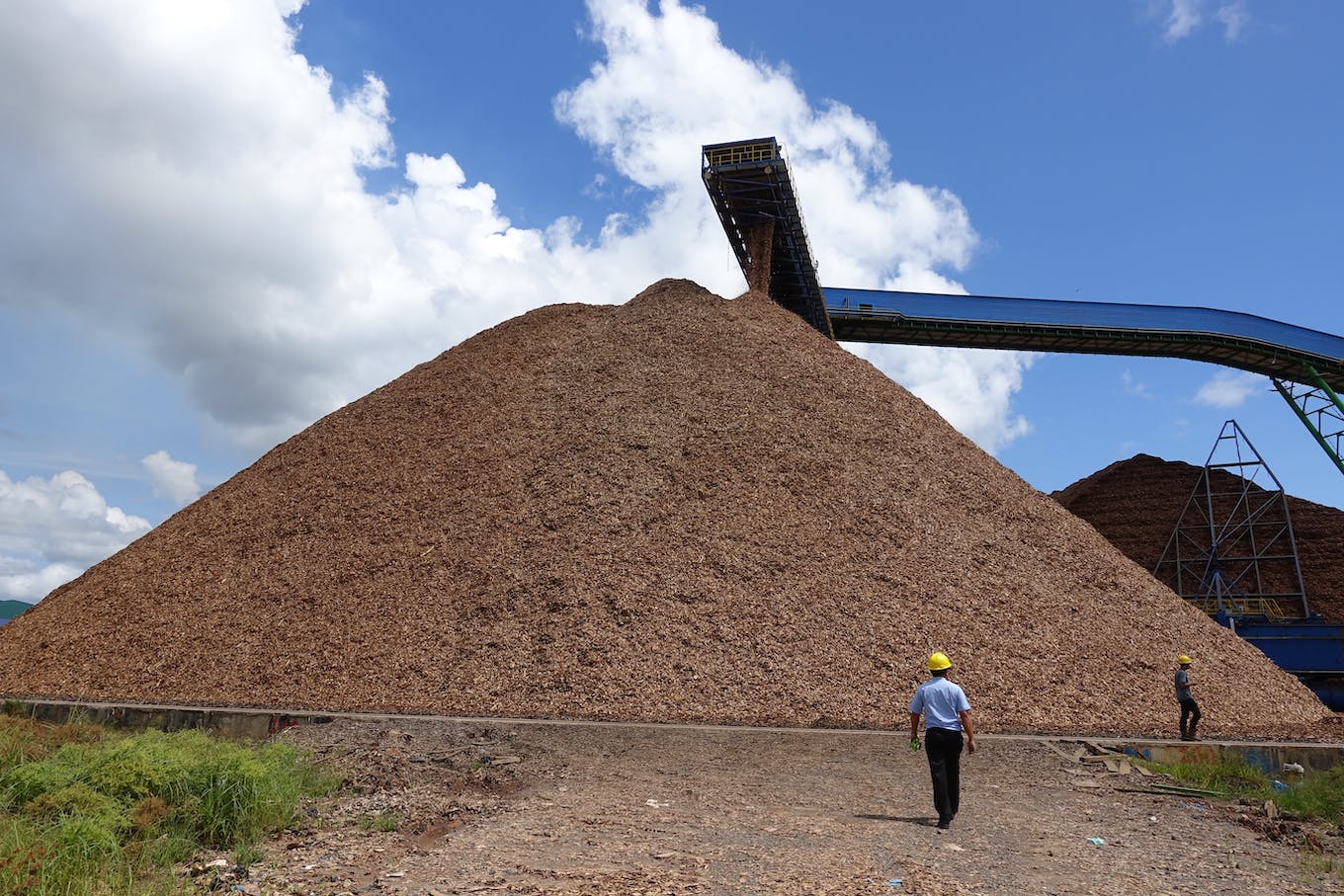 One of a number of chip mountains stands about 10 metres tall. The chips are fed into a digesting machine, where they are turned into pulp. 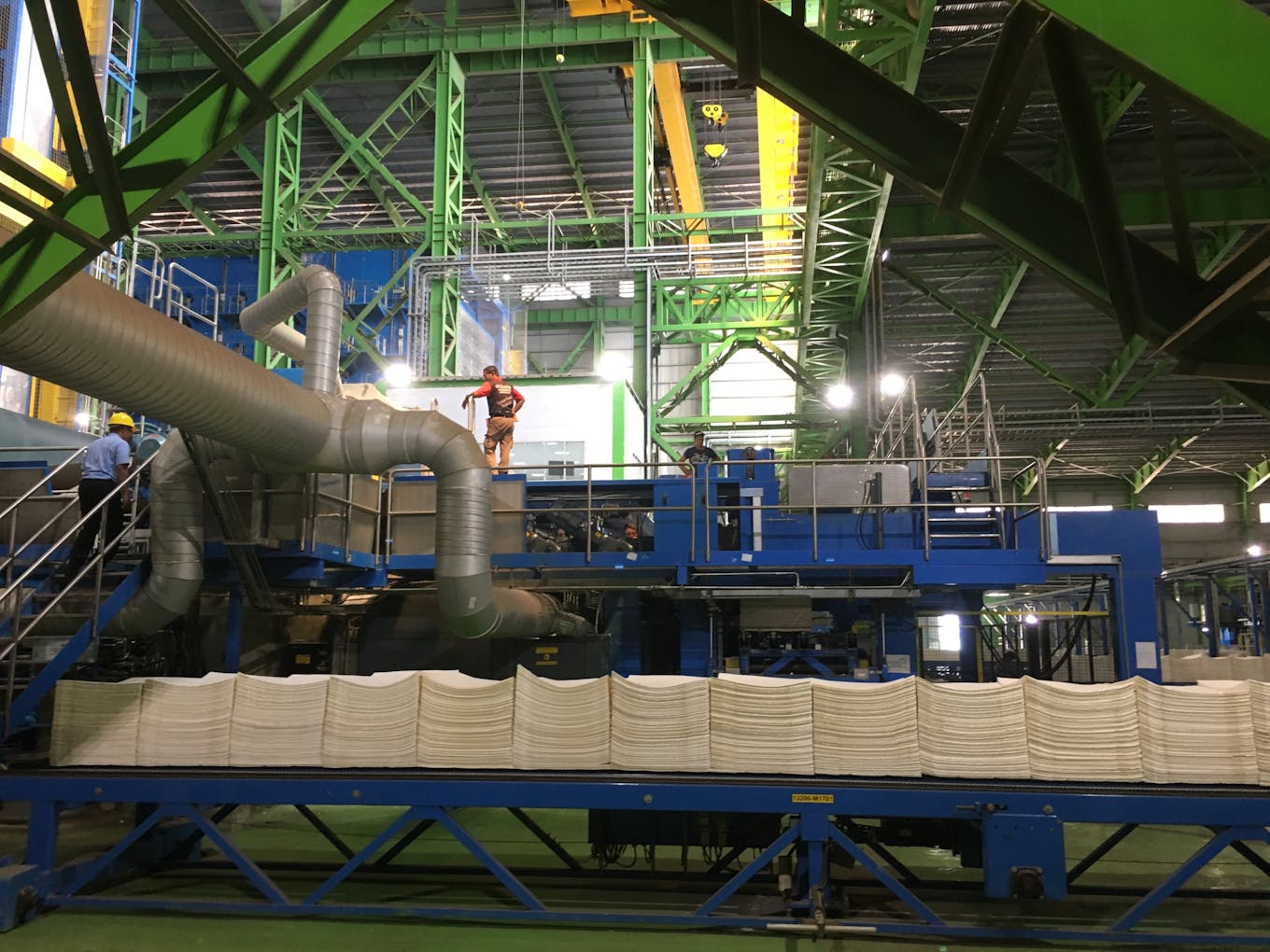 A row of pulp fresh off the production line. The mill plans to ramp up production to 5,800 tonnes of pulp per day by the end of this year. This 85 per cent of the mill’s licensed production capacity. Recently obtained documents show that they mill is capaple of producing a lot more, which environmentalists worry will ultimately mean more pressure on Sumatra’s remaining rainforests. 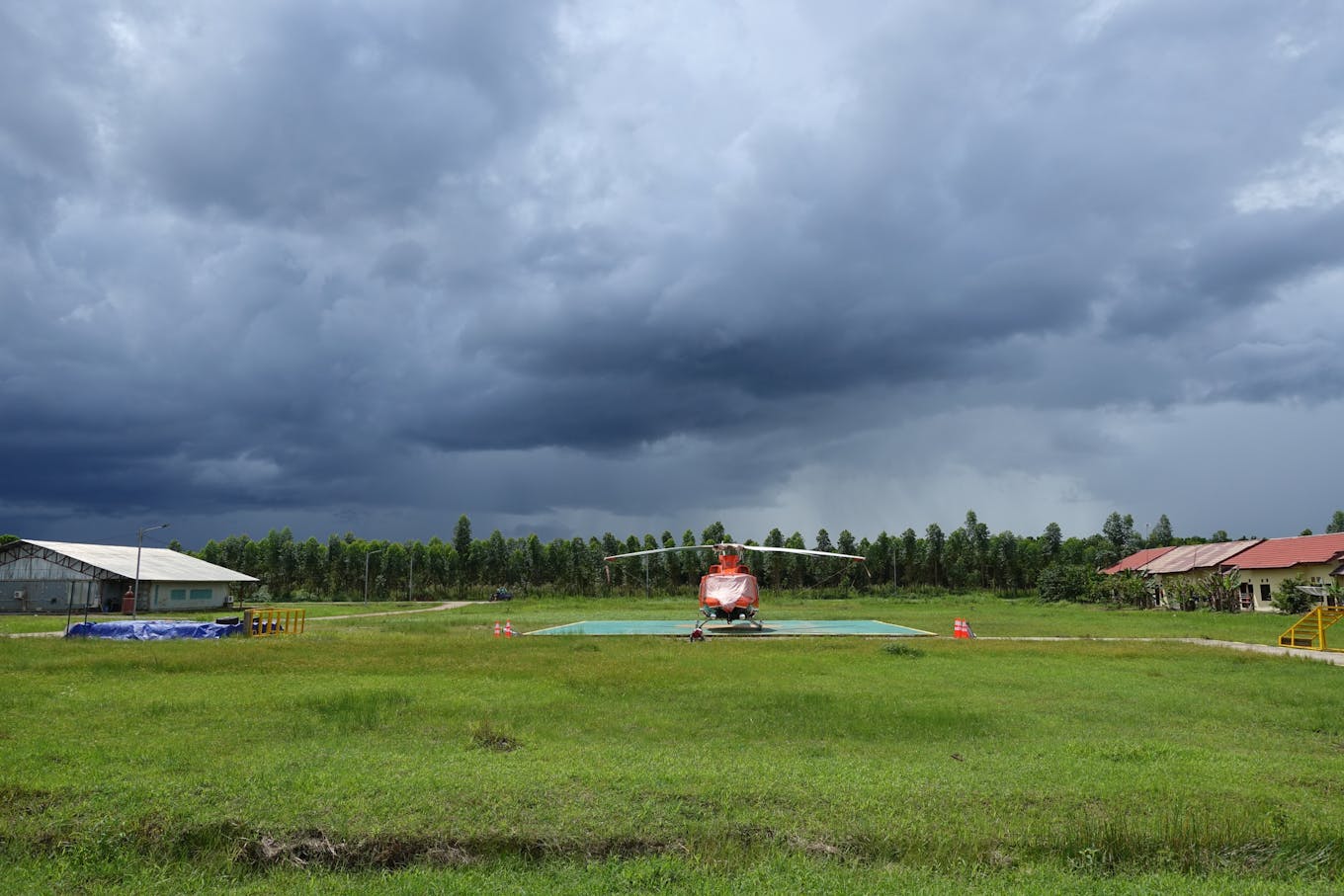 A fire-fighting helicopter is parked in front of a Eucalytus plantation. Forest fires destroyed 86,000 hectares of APP’s own plantations in the peatland fires of 2015. Around one third of the fires that choked the region that year are believed to have raged on APP’s own concessions in Sumatra, and the company has spent some US$10 million on ramping up its fire fighting capabilities since. 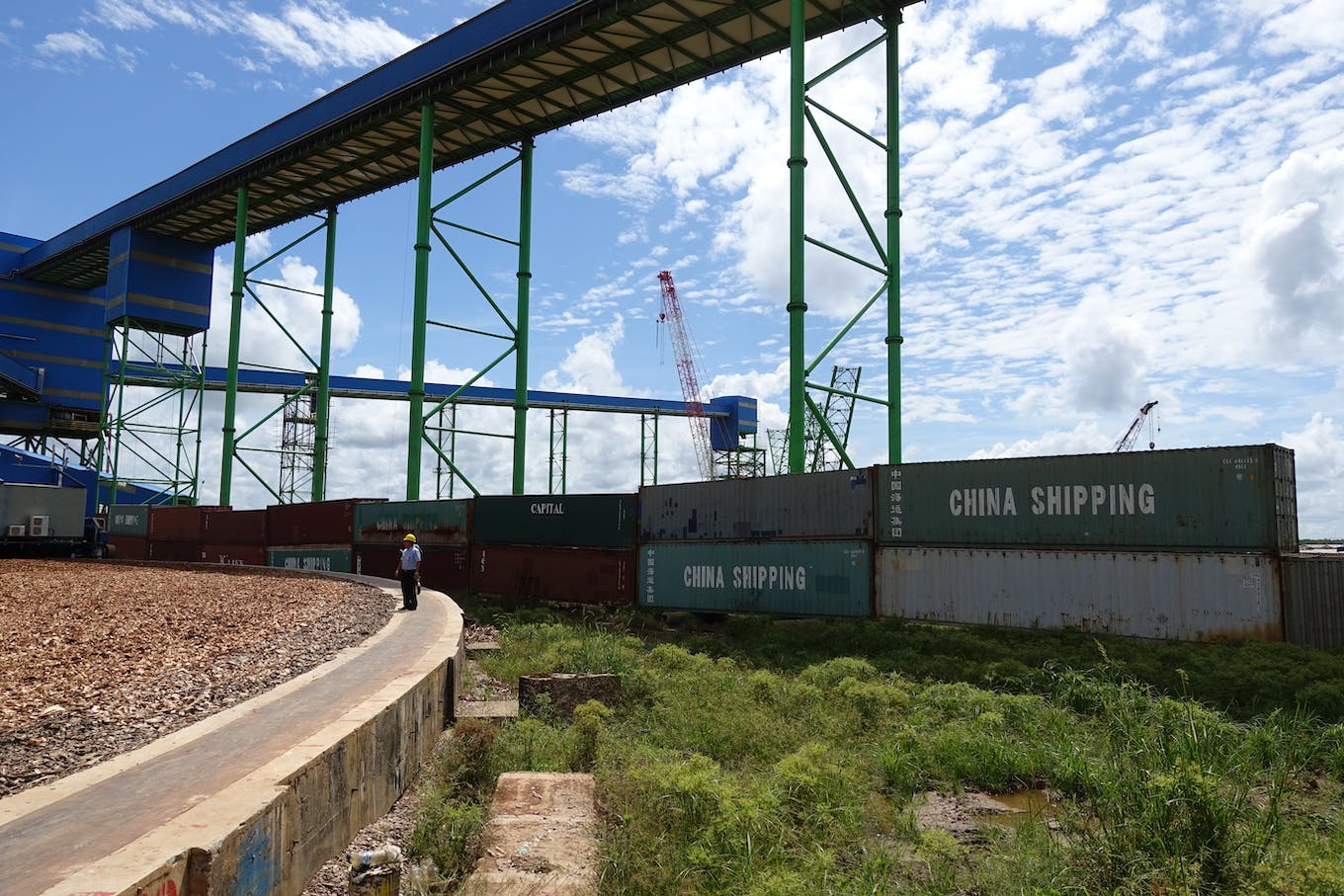 Shipping containers surround the chip mountain. Most (85 per cent) of the pulp produced by the mill is destined for overseas markets, particularly China and India.

Eco-Business visited APP’s mill in South Sumatra for this story, and interviewed company executives and civil society organisations in Jakarta. APP provided accommodation during the visit and paid for Eco-Business’s travel to and from Indonesia.