How to build a business around the SDGs, and do more with less

A haze-free Indonesian palm oil industry? Submarine nuclear energy in resource-constrained Singapore? The Ecosperity conference asked how the world can do more with less, and businesses can profit from the toughest challenges facing the continent.

How can we do more with less as Asia’s population races towards 5 billion by 2030? And how will we build businesses around the biggest challenges facing the region such as deforestation, hunger and inequality?

These were the crunch questions raised on Monday at Ecosperity, an annual conference held by Singapore investment firm Temasek, which this year focused on getting the private sector to adopt the Sustainable Development Goals (SDGs), ambitious targets set by the United Nations in 2015 to steer the world’s development for the next 15 years.

Temasek’s chairman, Lim Boon Heng, made the case for sustainable business in an opening address, pointing out that consumers are demanding it of the brands they buy, and investors are increasingly pumping money into environmentally and socially sustainable ventures.

“Companies are starting to place sustainability at the core of their business operations,” Lim said, pointing to a report from the Business and Sustainable Development Commission - launched at Ecosperity - that predicts the SDGs will present Asian firms with US$5 trillion in business opportunities and create 230 million jobs by 2030.

Ecosperity, which takes its name from ecology and prosperity, is a “recognition that growth can - indeed must - take place in a sustainable manner,” he said.

Frankly, CSR is not what we’re talking about [in the realm of sustainability]; CSR is a side-project. It’s run by people close to retirement.

How to stay in business

Paul Polman, chief executive of the world’s largest consumer goods company Unilever, gave the keynote and pointed out that rapid wealth creation over the last 50 years had placed massive strain on natural resources. Air pollution, for example, prematurely kills 8 million people a year, and by many measures, mankind has already exceeded acceptable limits on consumption, he said.

One of the biggest barriers to achieving the SDGs is the gap between rich and poor, Polman noted.

Human systems increasingly work for fewer and fewer people and “are out of equilibrium,” he said, noting that 80 per cent of people are living in countries that are becoming more unequal.

“Any system that leaves people behind, will be rebelled against - and that’s what we’re seeing globally,” said Polman, referring to the tumultuous geopolitical backdrop in recent years that has given rise to a Donald Trump United States presidency and Brexit.

But the CEO of the US$50 billion company was sanguine about the role of business to achieve the SDGs.

“Businesses go out of business because they lose their purpose,” he said.

Polman also took a swipe at companies that are not committed in their sustainability efforts, and the practice of corporate social responsibility (CSR) - a company’s efforts to give back to society.

“Frankly, CSR is not what we’re talking about [in the realm of sustainability]; CSR is a side-project. It’s run by people close to retirement,” he said.

Speakers and delegates at Ecosperity were divided on a number of issues, but united on one: The resolve to confront key issues such as climate change with or without the United States.

“[Donald] Trump’s decision to pull the US out of Paris leaves Indonesia unmoved. We remain strongly committed to the Paris climate agreement,” said Thomas Lembong, chair of the Indonesia Investment Coordinating Board (BKPM), a statement that was met with generous applause.

Singapore’s Deputy Prime Minister Teo Chee Hean said that the Paris Agreement would live on without the US, but questioned how the Green Climate Fund - a United Nations-backed fund set up to help developing countries adapt to climate change that has been criticised by Trump - would fare without contributions from the world’s richest country.

“In the end, we may have to do more with less - and that’s part of being sustainable too,” he said.

Resource-constrained Singapore has had to live by this strategy throughout its 51-year history, and the future of the city-state’s energy mix was at the centre of debate at Ecosperity.

Professor Chan Heng Chee, Singapore’s Ambassador-at-Large posed this question: Will there ever be a fossil-free Singapore?

Teo responded that Singapore - which relies almost entirely on natural gas, with a small contribution from renewables - has explored wave, tidal and solar energy, with the latter the most realistic option for a country that receives year-round sunshine. But nuclear remains off the table, because of the warning sent by the Fukushima disaster.

The most severely affected area around the Fukushima nuclear power plant was 50km in radius, an area wider than Singapore, Teo noted.

“We may have to wait for the next generation, or the generation after that,” he said, referring to advancements in nuclear plant technology.

Sir David King, the United Kingdom’s former foreign secretary’s special representative for climate change, said that there were a number of “missing technologies” needed in the fight with climate change, and suggested that Singapore might consider using small-scale underwater nuclear facilities off the coast as an alternative energy source.

“Singapore cannot rely on natural gas in the future,” said King, who warned that cities such as Calcutta were at risk of being destroyed by climate change if action wasn’t taken now to shift to renewables and curb global warming.

Singapore’s big renewable energy play will be in solar, Teo said. The sunny citystate plans to instal solar panels on to the surfaces of 5,500 public housing buildings by 2020, tripling the amount of solar Singapore currently harnesses.

Productivity and the haze

The forest fires that have engulfed Southeast Asia in a toxic haze almost every year for the last two decades have been the result of poor productivity and “laziness” on the part of Indonesia’s agroforestry sector. This was the frank assessment by the chair of Indonesia’s government investment agency. 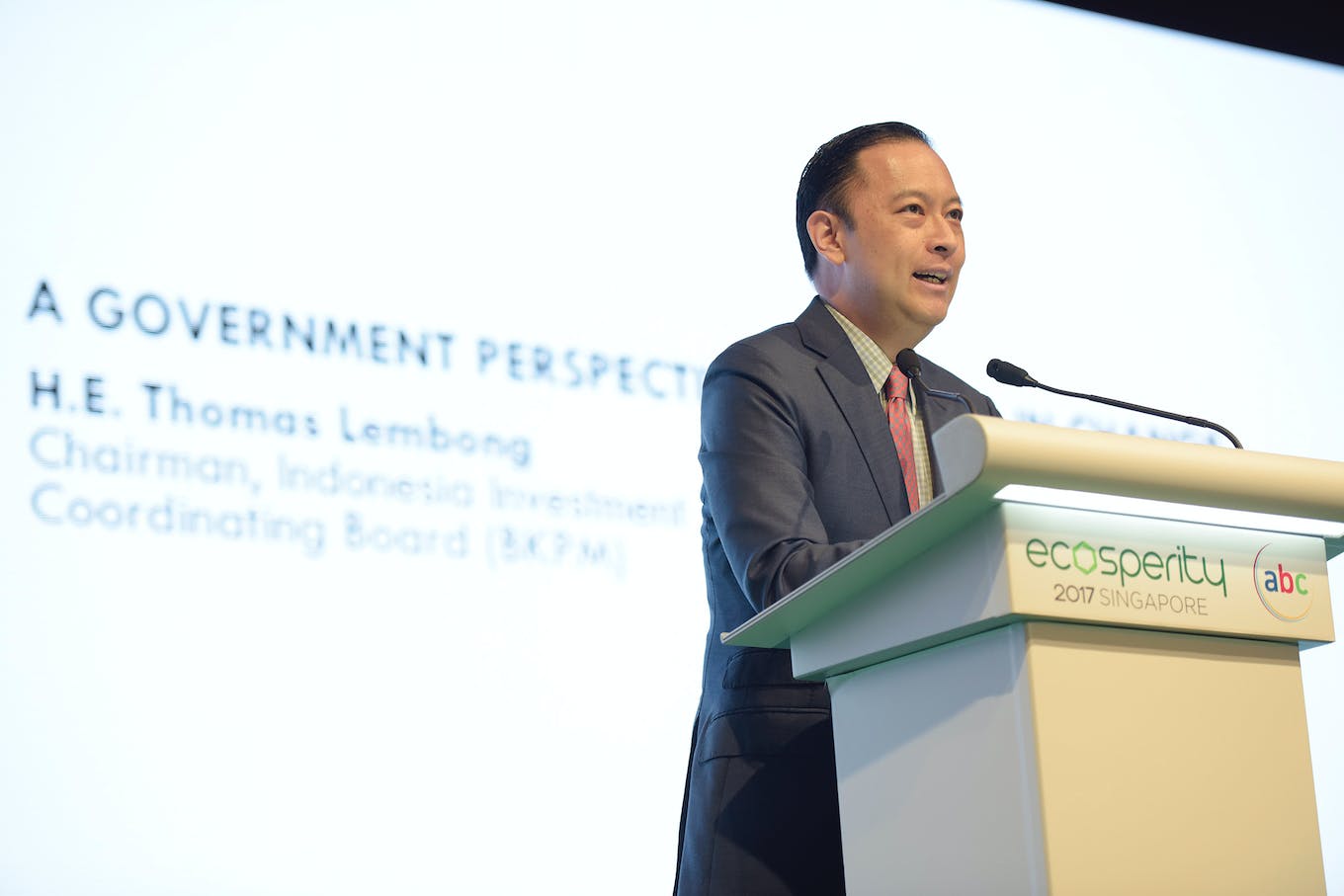 Thomas Lembong: Indonesia’s forest fires are “not going to be solved by a flash-in-the-pan effort, or a few years of hard work.”

Thomas Lembong, chair of the Indonesia Investment Coordinating Board (BKPM), said that Indonesia’s palm oil industry is farmed across a vast area where almost half (45 per cent) of the area is used unproductively.

“We were lazy about it. We just cleared more forest [to make plantations],” Lembong told his audience of government and business leaders about the expansion of what is now the world’s largest palm oil industry, worth US$17 billion a year.

Indonesia, he said, is committed to raising palm oil production without deforestation or exploiting carbon-rich peatlands, a vast swathe of which went up in smoke in 2015 as forests were burned to make way for plantations, causing US$18 billion in damage to Southeast Asia’s largest economy.

In an interview with Eco-Business on the sidelines of Ecosperity, Lembong said that the problem of slash-and-burn land clearing in Indonesia would not be solved “overnight,” and required a “sustained, persistent and consistent effort spanning many years.”

“All of us can, over many years and decades, develop pride [in being fire-free]. It’s not going to be solved by a flash-in-the-pan effort, or a few years of hard work.

“It needs to become part of our lifestyle, part of our psyche - and we all need to be excited about it,” he said.

Ecosperity was attended by 350 senior business leaders and policymakers and was held at the Ritz-Carlton Millenia Hotel in Singapore.