How the Sydney Opera House balances heritage with sustainability

The Sydney Opera House is famous for its architecture and performing arts repertoire, but beneath the iconic sails are numerous measures to balance sustainability commitments with its heritage features. Eco-Business takes a closer look.

As Australia’s most iconic building, a near winner of a spot as one of the new seven wonders of the world, and a world-renowned performing arts venue, the Sydney Opera House has plenty to shout about.

And as of last September, the iconic venue can add another accolade to its name: It is one of only a handful of World Heritage buildings in the world to achieve a four-star rating for green building performance.

From LED lights that preserve the warm glow of its concert halls while using only a fraction of the energy of incandescent bulbs to an elaborate waste recycling programme, the Opera House has implemented a range of measures to ensure that its operations are as energy and resource efficient as possible.

These efforts over the past decade have paid off, as the venue earned four out of five stars in the Green Building Council of Australia’s (GBCA) certification scheme for building performance last September.

Since its inception, the building — which was designed by Danish architect Jørn Utzon and opened in 1973 — used a seawater cooling system, considered innovative for its time. Its chillers take in cool sea water from the surrounding harbour instead of fresh water, saving 15 million litres of drinking water per year. 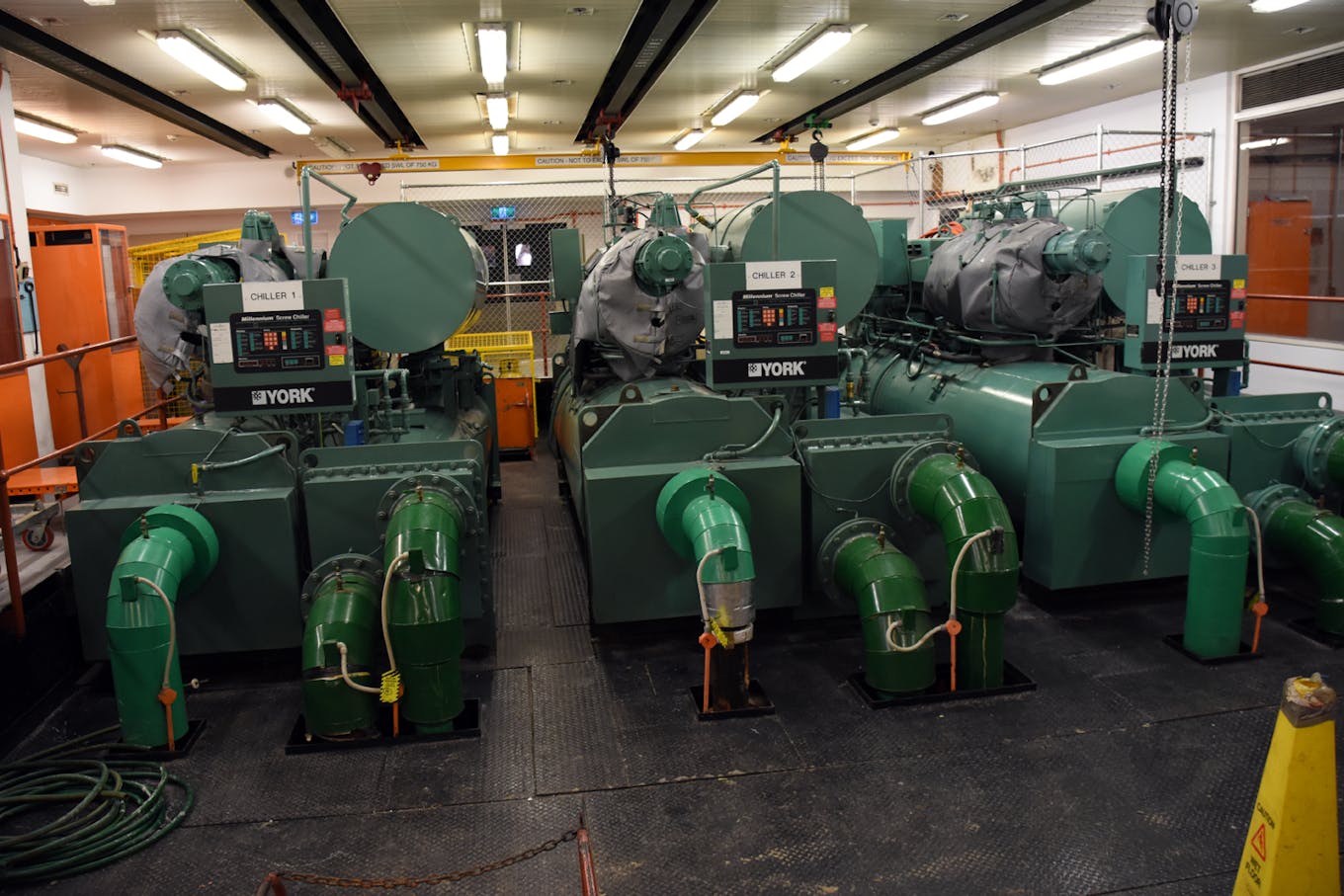 The Opera House’s chiller room. The cooling system uses sea water instead of fresh water, and the heat recovered from the chillers is also used to warm up the building in cooler weather. Image: Eco-Business

More recently, the Opera House has consolidated its efforts into a comprehensive sustainability plan, which looks at a broad range of issues like waste, water efficiency, energy use, and greenhouse gas emisisons.

Bob Moffat, the Opera House’s manager of building strategy and sustainability, shares that sustainability first became a key concern for the organisation a decade ago, when external consultants advised the company that it needed an energy management plan.

This set in motion a process of consolidating sustainability efforts, implementing measurement and data collection frameworks, setting targets and  strategies to meet them, all of which culminated in the Opera House’s first holistic sustainability plan, which it launched in 2010, shares Moffat.

Some of the initiatives that the Opera House has introduced since 2010 include raising the number of recycling streams from two to eight, switching out the incandescent bulbs in some of its concert halls and theatres to LED lights, and setting up a food waste recycling system for the five food and beverage operators on its premises. 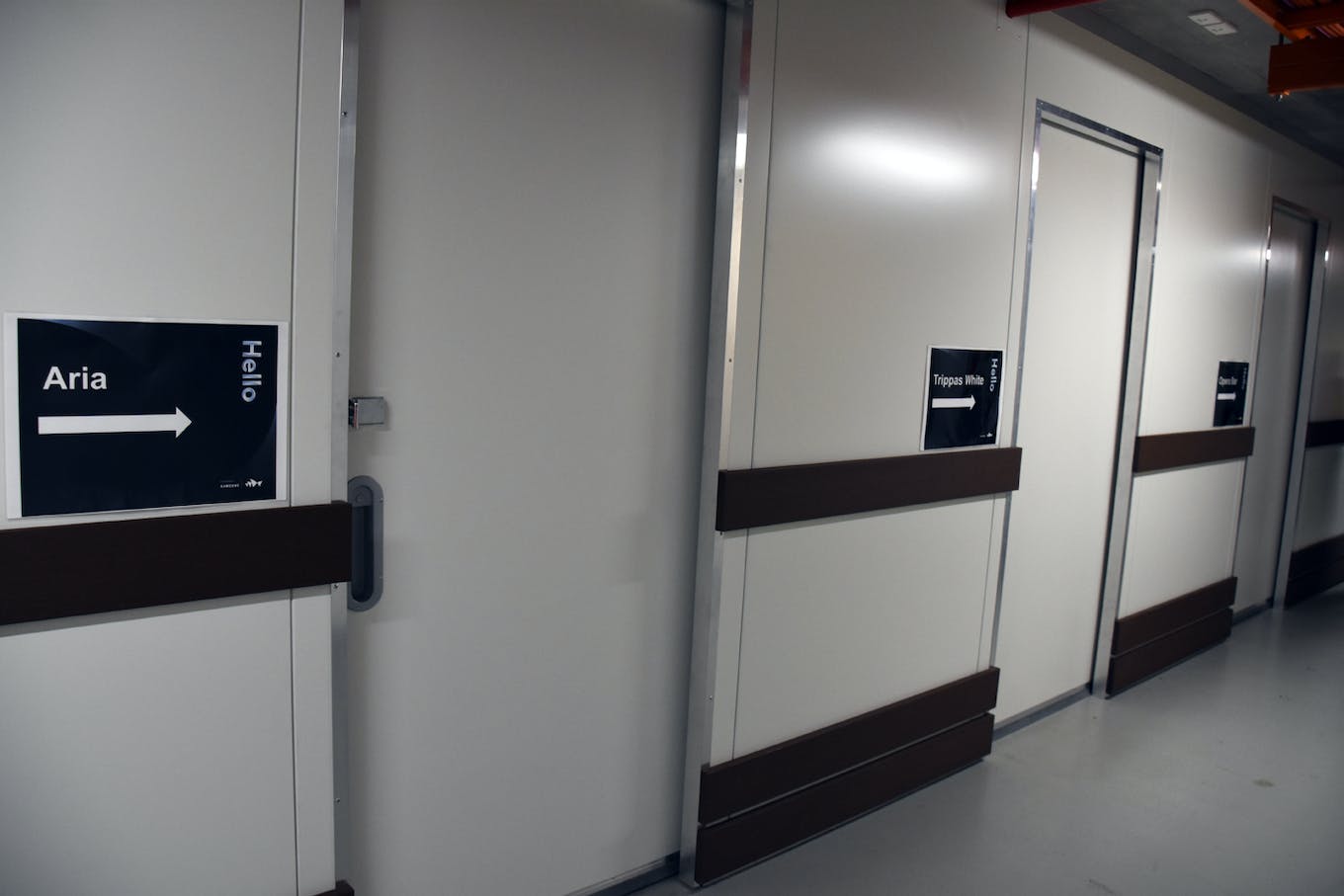 Bins to collect food waste from each of the food and beverage operators in the Opera House. Image: Eco-Business

As a result, the Opera House has managed to raise its recycling rates from 20 per cent in 2010 to 65 per cent, and cut its energy use by 75 per cent. This has resulted in a total of A$1 million in electricity savings since 2010. 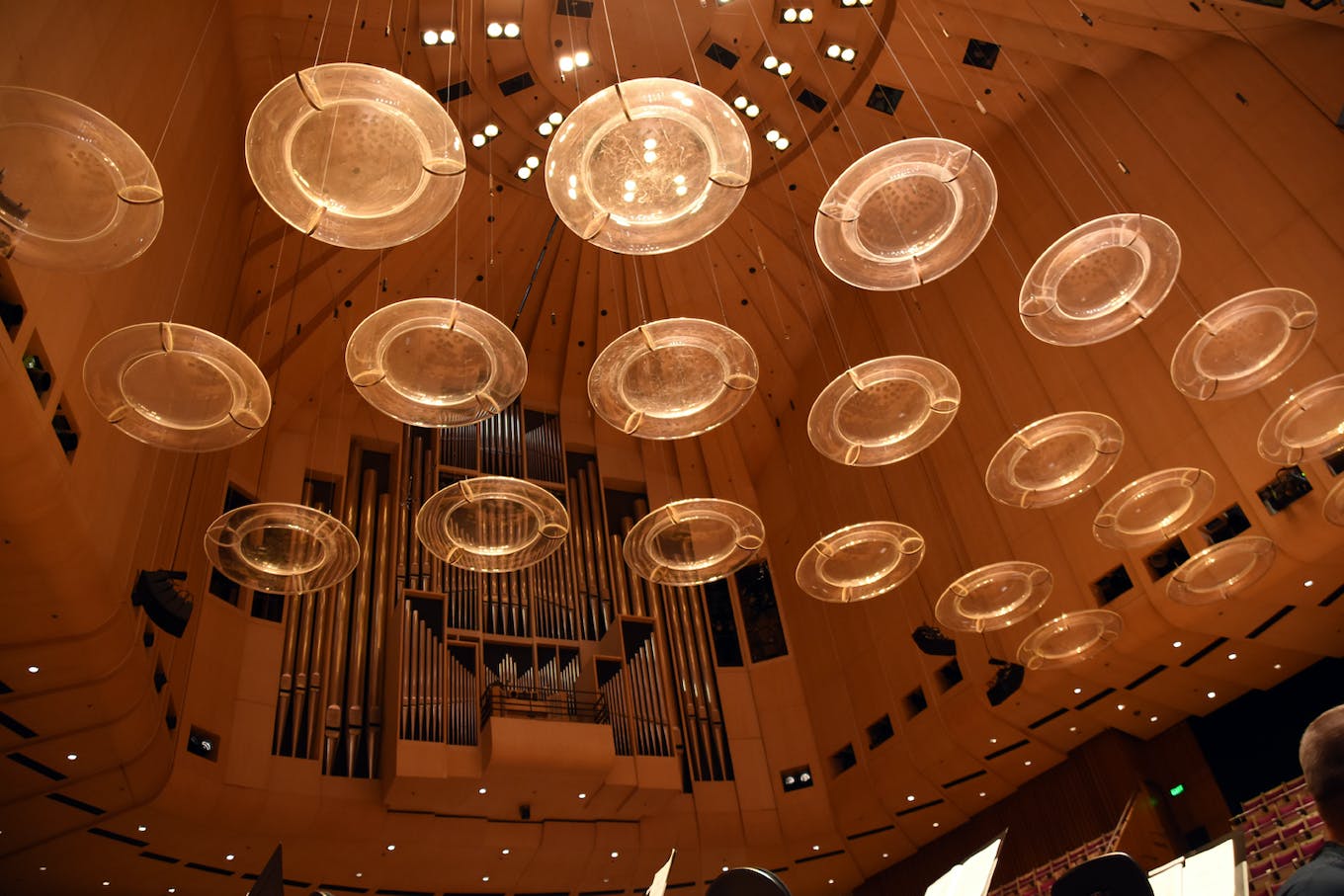 LED lights in a concert venue in the Opera House mimic traditional incandescant lighting while using a fraction of the energy. Image: Eco-Business.

It was not so straightforward replacing traditional lighting with modern LED bulbs, shares Martin, as any sustainability feature had to ensure the venue’s strong cultural identity and rich heritage were not compromised—this is the same reason why it’s impossible to install solar panels on the iconic sails, though the Opera House does buy some six per cent of its electricity from green sources.

When it came to the LED retrofit, the challenge was to find lights that provide the same warmth and level of illumination that old-fashioned lights do, especially from the high roofs of the performance halls, Martin explains.

The new lights not only preserve the traditional opulence associated with the Opera House, but the individual red, green, and blue diodes can also be adjusted to flood the room in vivid hues for contemporary performances. 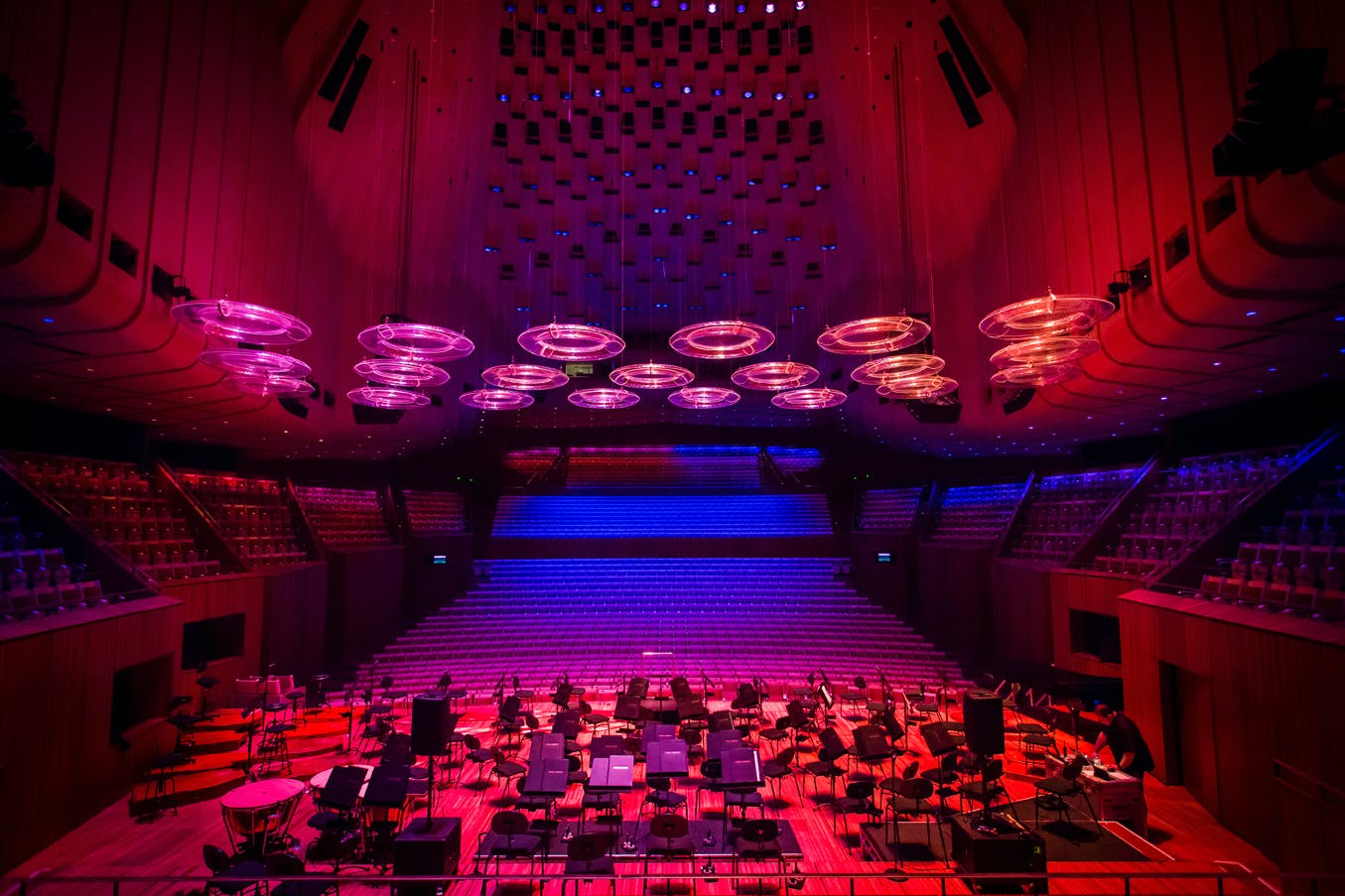 The same lights can also be used for more modern light settings, such as the shades of red, pink, and blue seen here. Image: Anna Kucera

In other instances, heritage preservation and sustainability blend seamlessly, she notes.

For example, the Opera House has developed Green Cleaning guidelines that instruct maintenance companies to use chemicals which have minimal impact on the environment, especially the marine ecosystem in the surrounding harbour.

But as it turns out, gentle and non-toxic cleaning agents are also the most suitable for preserving the heritage bronze, wood, and concrete fixtures. This is why bronze beams and railings are polished using olive oil, baking soda is used to clean the concrete pillars, while clay is used to clean untreated wood in the Opera House, says Martin. 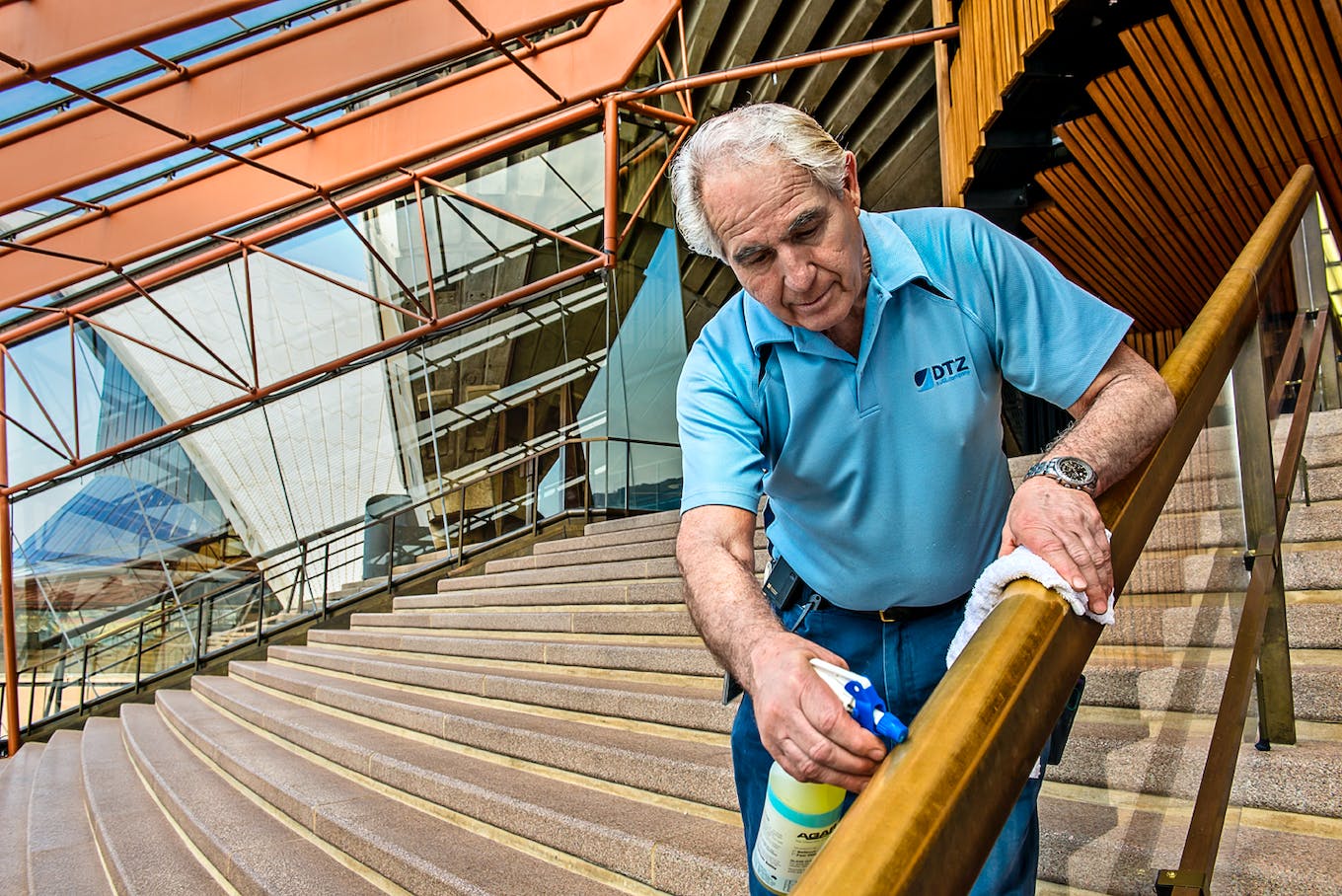 Steve Tsoukalas, Opera House employee of 47 years, cleaning the bronze handrails with olive oil. This technique, developed by Tsoukalas, protects the heritage materials, is safer, and is better for the environment. Image: Filippo Dall’ Osso.

Going forward, the Opera House wants to achieve a five-star rating in GBCA’s certification scheme, become completely carbon neutral, and raise operational waste recycling rates to 85 per cent. All this by the time it turns 50 in 2023.

Moffat shares that “the GBCA’s five-star rating remains our biggest challenge, and will be our biggest accomplishment”. In addition to its ongoing initiatives, the Opera House is also in the process of installing a new Building Management and Control System to monitor and further reduce its energy use, he says.

Members of the public can get a behind-the-scenes look at the Sydney Opera House’s efforts to fulfil these commitments through the Airbnb-supported sustainability tour, which runs every Tuesday morning till 29 November 2016. In addition to learning about the Opera House’s initiatives, guests will also receive tips on environmentally-friendly practices they can emulate in their own homes.

Greg McTaggart, the Opera House’s director of building, says in a statement that “this new initiative with Airbnb provides an exciting opportunity to share our successes and lessons first hand, while empowering visitors to the Opera House to create change in their own homes”.

He adds: “As the symbol of modern Australia, it’s great to be able to set an example that inspires others.”