How insetting is helping AccorHotels win over guests and locals

Many hotels today try to offset their environmental impact, but French hotel chain AccorHotels uses a unique approach called insetting. That is, its CSR initiatives rehabilitate and sustain the very areas the business depends on for survival.

Signs encouraging simple acts such as reusing towels or saving water have become a permanent fixture in hotels worldwide as they help to reduce environmental impact and minimise energy costs.

But at French multinational AccorHotels’ properties, these gestures are going a step further to sustain local livelihoods and build communities, thanks to an initiative called Plant for the Planet, which channels half of the hotel’s laundry savings into reforestation projects which support sustainable agriculture.

As part of the programme, AccorHotels, in partnership with Pur Projet - a French collective of 50 global organisations which work to support small farmers - channels some of the money saved every time a guest hangs up a towel to support reforestation projects close to its hotels.

Projects are also designed to promote agroforestry - a sustainable farming system where trees and crops are grown on the same plot of land.

In Thailand, for example, the relationship starts from the donation of 50 per cent of its laundry savings to plant trees and agro-crops and then buy them back, enabling a sustainable community agro economy. Through a partnership with Fair Trade, organic ‘Pur Products’ such as coffee is currently being produced domestically on trial for the group’s Thailand hotels.

Arnaud Herrmann, vice president of sustainable development, AccorHotels, tells Eco-Business in a recent interview that this initiative is a perfect demonstration of ‘insetting’, a core sustainability philosophy for the company.

A fresh spin on offsetting

A relatively new concept in business circles, insetting is a twist on the more well-known idea of ‘offsetting’, where companies compensate for their greenhouse gas emissions by funding reforestation projects in other parts of the world.

Rather than simply compensating for climate impact by paying distant, unrelated actors to plant trees, insetting focuses on helping the ecosystems and communities which are directly impacted by a company’s operations.

This, says Pur Projet, creates long-term values for all stakeholders, helps a company preserve the resources on which it depends, and protect its market value.

The concept has gained traction among various companies such as French luxury cosmetics maker Clarins, which protects its core ingredient – flowers and herbs - by financing the planting of medicinal plants in Peru.

Swiss chocolatier Halba also helps its cocoa supply farmers in Peru to plant trees in agroforestry systems, a move which not only neutralises its emissions but also produces better quality cocoa in a sustainable way.

At AccorHotels, insetting is the guiding principle of Plant for the Planet, which was launched in 2009. Since then, the company has planted over 4.5 million trees in 25 countries where it operates.

In Peru, for example, the company supports small cocoa and cane sugar producers in the reforestation of degraded areas while in Brazil, it helps preserve water resources by planting trees along water basins and riverbanks.

In some countries, AccorHotels has expanded the scope of the programme to create a virtuous cycle of economic and social benefits for farmers and the company.

In addition to buying organic produce from local farmers in Thailand, the company also finances the planting of olive trees in Rif Valley, Morocco. Here, olives are the main viable alternative to cannabis cultivation. AccorHotels also purchases part of the olive oil produced for use in its properties.

“The benefits of insetting are multiple,” notes Herrmann. Since Plant for the Planet was launched, AccorHotels has shaved 13 million euros off its laundry bills, half of which has been invested in reforestation projects.

Thanks to the programme, the chain has also achieved a more diversified supply chain, greater loyalty from customers, and better room sales, Herrmann adds.

He says that the company’s strong emphasis on sustainability and its efforts to get staff involved in tree planting efforts also fosters higher employee engagement and lower turnover rates. 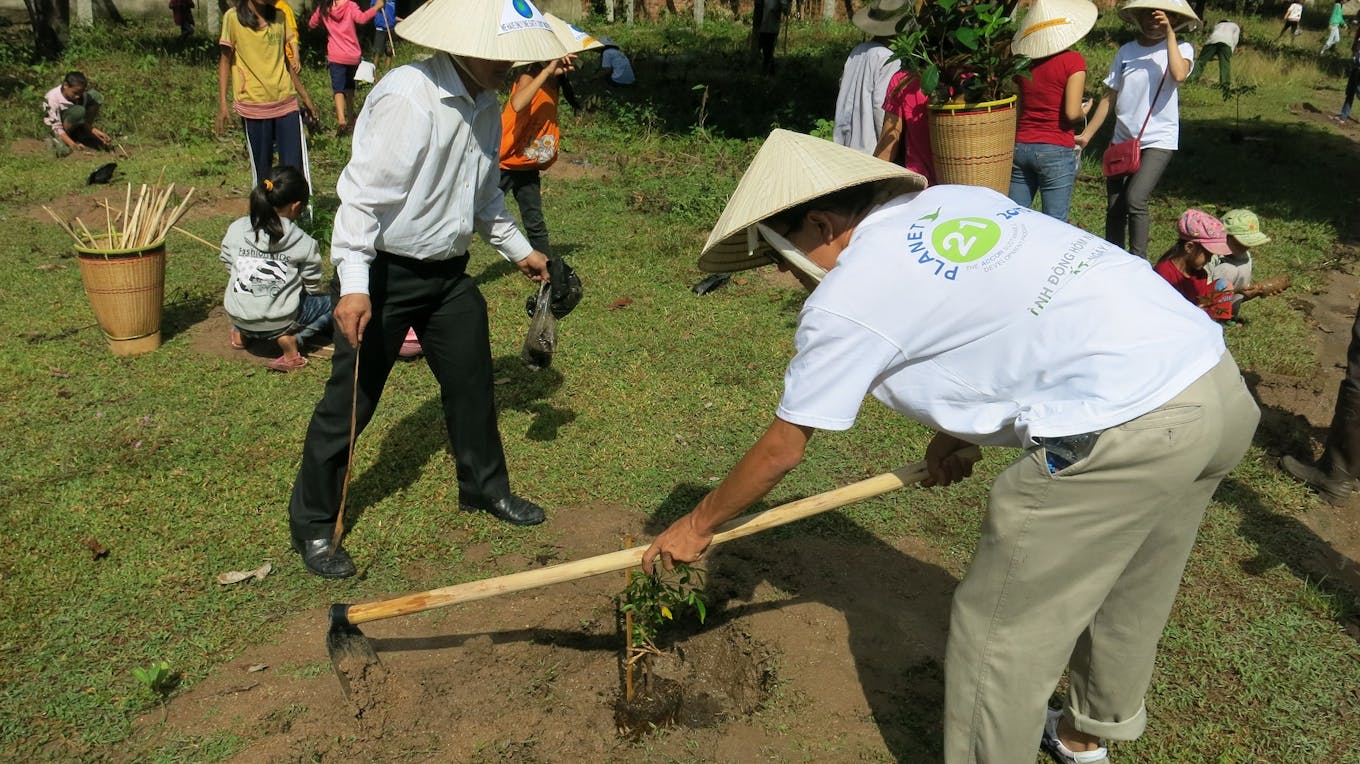 Farmers also agree that Plant for the Planet has improved their livelihoods.

“Trees attract insects and birds, so a farmer doesn’t have to use a pesticide,” he says. They also improve air quality, and fallen leaves act as a natural fertiliser.

“We are happy not only that AccorHotels supports us to plant trees but also buys our products which are a result of this environmental service we participate in,” he adds. “This motivates farmers to keep up the work with organic farming.”

This model of corporate environmental responsibility “is a virtuous model that can be extended to other hotels,” says Herrmann. To this end, AccorHotels has promised to plant 10 million trees by 2021.

We are happy not only that AccorHotels supports us to plant trees but also buys our products which are a result of this environmental service we participate in. This motivates farmers to keep up the work with organic farming.

One of the key reasons why AccorHotels has such an expansive insetting programme is because the chain is acutely aware of its global socio-economic impact, says Herrmann.

Founded in 1967, the French multinational runs over 3,800 hotels in 92 countries. It sustains about 880,000 jobs worldwide, including 700,000 indirect jobs in sectors such as laundry, agriculture, healthcare, and transport.

The company says that it also contributes 22 billion euros to global gross domestic product (GDP) - a figure equivalent to the GDP of a country like Cyprus. This includes the value added directly by the company and indirect expenses such as the activities of its suppliers and public spending.

These figures show that the AccorHotels group’s “value creation drive is firmly rooted in local communities” and underscores the responsibility the chain has to its host countries, says Herrmann.

Gaynor Reid, vice president of communications, AccorHotels Asia Pacific, adds that its operations in countries such as China, India, Thailand, Australia, and Indonesia account for a significant proportion of the company’s global impact.

AccorHotels provides about 306,000 direct and indirect jobs in Asia Pacific - about a third of its worldwide total - and the region also represents one-fifth of Accor’s contribution to global GDP.

“It is therefore important for us to give back to the communities that support us,” says Reid. “That places environmental and social responsibility at the heart of AccorHotels’ business strategy and development.”

All hands on deck

Plant for the Planet is one of AccorHotels’ many environmental and social responsibility projects, all of which are consolidated under Planet 21, the company’s umbrella initiative for sustainability.

Planet 21 is a set of 21 commitments across seven categories including reducing carbon emissions, fair employment, and promoting good health among guests and staff.

The company-wide programme was launched in 2012, and is a rebranded version of the AccorHotels Environmental Charter, a sustainability initiative which had been in effect since 1997.

Planet 21 initially had targets that were to be fulfilled by 2015, and says that according to preliminary assessments, most of the targets were met. However, a few objectives need to be reworked, and the company is still in the process of verifying its figures. It is also due to issue an updated set of future targets by the second quarter of this year.

A parallel initiative, Charter 21, also lays out 65 action points on sustainability that AccorHotels should comply with, such as installing energy-saving lightbulbs and using eco-labelled products in guest rooms. It then ranks each hotel on a scale of Bronze to Platinum, according to how many of these practices it adopts.

Implementing Planet 21’s policy commitments and Charter 21 goals across AccorHotels’ expansive global portfolio is a major challenge, says Herrmann. Educating and engaging staff so that they integrate sustainability into their daily work is a key strategy for success, he notes.

Not only is there a dedicated team of 100 staff to manage AccorHotels’ corporate social responsibility (CSR) efforts, the company has also directly linked general manager bonuses t to their achievement of CSR  targets.

Additionally, all employees are trained on how to implement Planet 21 initiatives, and the group organises special programmes such as an annual Planet 21 day to encourage employees to take action for sustainable development.

Examples of these activities include the Hug a Tree campaign, where staff dress up as trees and allow guests to hug them for a small donation, and the “Mr and Ms Tree Gala” in Bangkok, a fashion show where staff showcase “wearable art” made from recycled materials.

“We engage people through dynamic activities that raise awareness and keep them talking about sustainable development, and ultimately practice it in their daily life,” says Herrmann.

Staff, too, seem to be responding positively. As Fraser McKenzie, general manager of Novotel Bangkok Impact - an AccorHotels property - puts it: “We are real people in a people centric profession, and to ignore our environment is both unsustainable and endangers our own existence.

“Sustainability must and will continue to factor into a smart business model”, he says.