How can Asia Pacific balance for better?

As International Women's Day 2019 celebrates global progress on gender equality with the theme #BalanceforBetter, women in the region remain nowhere near on par with men when it comes to their participation in the economy.

Over the past decade, countries across Asia Pacific have improved girls and women’s access to education, introduced legal reforms that give women equal rights to men, and placed more women in government. Despite this, the region still lags behind the rest of the world when it comes to overall gender equality, with only half of all women playing an active role in the economy.

According to a 2018 report by McKinsey, advancing gender equality and women’s rights in Asia Pacific could add US$4.5 trillion dollars to their collective annual GDP in 2025. However, the business imperative underlying women’s participation in the workforce has yet to take root in economies and societies in the region, even though research has increasingly shown that gender diversity in the workplace and on boards can boost growth.

Closing the gender gap in education [in Asia] has not translated into equal rights in labour markets in the region, partly because of social norms that discriminate against women.

Even as more women are becoming more educated, women’s labour participation rate has remained low across East Asia and the Pacific to South Asia, where countries like Pakistan, India, Bhutan and Nepal rank among the lowest in the world on economic participation and overall gender equality as seen in the Global Gender Gap Report 2018 from the World Economic Forum. 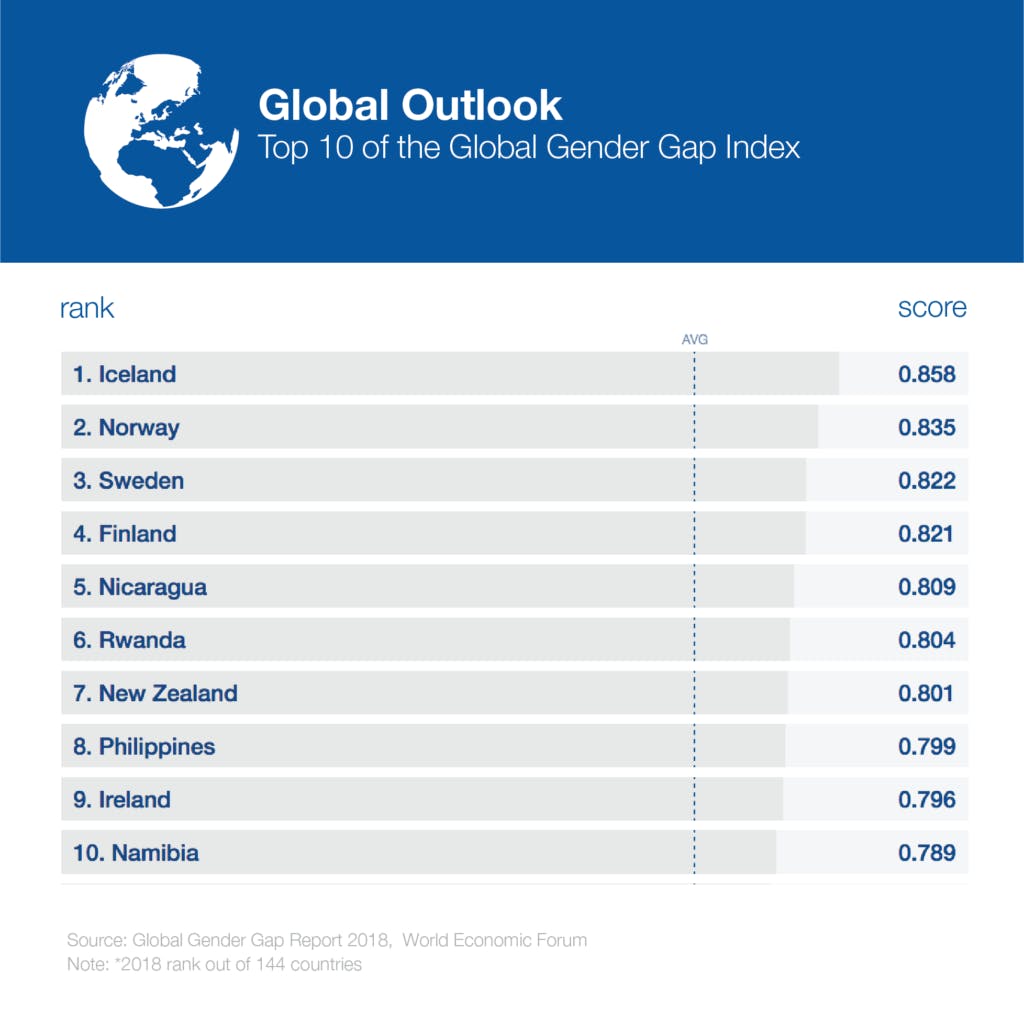 “Asia Pacific has made very good progress on education. Countries such as the Philippines have a larger proportion of girls being educated at a higher level,” said Anna-Karin Jatfors, United Nations Women deputy regional director for Asia and the Pacific, noting that women’s economic participation has stagnated over the past 20 years, and even declined in countries in South Asia.

She added: “Closing the gender gap in education, however, has not translated into equal rights in labour markets in the region, partly because of social norms that discriminate against women.”

Furthermore, women’s legal rights in Asia Pacific remain below the global average, according to the World Bank Group’s World, Business and Law 2019 report. The study charts progress on gender equality by examining legal reforms affecting women’s employment and entrepreneurship across the world.

In East Asia and the Pacific, 38 reforms addressing women’s legal equality were introduced, while 18 were brought into law in South Asia. These reforms focused on gender-based violence and sexual harassment in the workplace—issues that Jatfors says are not only critical to women’s overall health and safety but also their well-being and productivity at work.

Sexual abuse and harassment can prevent women from taking up certain jobs and even leave jobs, she says, which is why covering such issues in legislation is a big step forward for countries in the region.

Yet, due to prevailing stereotypes that assign fixed gender roles to men and women, women in the region are rarely encouraged to work outside the home. Not seen as valuable income producers or agents of social or economic change, women remain underrepresented in various sectors across Asia Pacific economies.

In Pakistan, Sadaffe Abid, one of the country’s most successful businesswomen and founder of CIRCLE, a women-led organisation that aims to advance women’s economic participation and entrepreneurship, believes that investing in women is the “smartest economic venture of today.”

Through leadership workshops, mentorships, start-up competitions and social campaigns, CIRCLE works to encourage Pakistani women to explore their dreams as entrepreneurs and use technology as an opportunity for change as well as come up with solutions to local challenges.

It’s not just Pakistan that is behind in this, but a majority of countries in the world need to make progress in terms of getting more women in leadership roles.

“Pakistan is a more challeging environment because of the lack of mobility for women here,” she said, adding that while ride-hailing services such as Uber and Kareem have made a huge difference to women’s mobility, not everyone can afford to pay for such services.

According to Abid, 62 per cent of female graduates in Pakistan do not join the workforce due to these barriers, along with a lack of access to affordable finance and the absence of women mentors or female leaders to look up to.

Pakistan ranks among the lowest in the WEF report on the proportion of women in senior and professional positions. The lack of visible role models impedes women’s advancement in the economy, says Abid, who nonetheless notes that the absence of women in leadership is an ongoing problem everywhere, even in countries like the United States.

“It’s not just Pakistan that is behind in this, but a majority of countries in the world need to make progress in terms of getting more women in leadership roles.”

Jatfors agrees: “Investing in gender equality is critical to unlocking the untapped potential of economic growth, especially as women have the experience and knowledge critical to confronting the challenges of today. More than half of the communities in Asia are made up of women, so it makes sense that they should be represented as leaders in every sector.”

International Women’s Day (March 8) is a global day celebrating the social, economic, cultural and political achievements of women. This year’s theme is “Balance for Better”.