The B House, named after its owner, generates more solar energy than it consumes, costs the same as similar properties in the area, and shares many features with Singapore's black-and-white colonial bungalows, say its designers.

A ‘carbon negative’ building produces more energy than it uses, resulting in a net surplus of energy and an overall carbon negative rating.

The B House achieves this by incorporating features in colonial black-and-white bungalows such as generous roof overhands, large verandahs for outdoor living and entertaining, and variable shutters that could keep the sun out but allow the air to flow in. It also uses solar panels to generate clean energy.

The result is a ‘carbon negative’ house that adapts to Singapore’s weather in order to reduce energy and water use.

The home, situated in Bukit Timah, draws on many of the design lessons from the Sime Darby Idea House in Malaysia, Asia’s first carbon-zero prototype home that’s also created by Pomeroy Studio. Idea House was based on the traditional Malay kampong house and was completed in 2010.

The designers wanted to incorporate traditional elements from the old black-and-white bungalows but reinterpret them for an updated, 21st century version of the iconic buildings, Pomeroy Studio said in the statement on Tuesday.

For example, colonial and Asian dwellings were marked by the presence of courtyards and verandahs, serving as places of social interaction while also cooling the buildings themselves, as the breeze entering into the home through such spaces would be cooled by the surrounding foliage. The B House features both.

Jason Pomeroy, founding principal of Pomeroy Studio, said that the owners “sought to ensure that the occupants would never have energy bills again, and greatly reduced water bills. The challenge therefore was to create a zero carbon house at the same cost of a bungalow comparable in scale.”

“What started as a carbon zero project would eventually become a pioneering operational carbon negative house in Singapore,” he added.

The 100 square metres of polycrystalline photovoltaic solar panels on the roof are expected to generate 16,720 kWh per year, allowing the house to generate surplus energy that could be supplied back into the grid.

The house is orientated and shaped to minimise heat from the East and West sun, reducing heat gain and maximising ventilation by allowing the prevailing wind to flow through. Airflow is further facilitated by placing windows and high ceilings at certain spots.

The house’s North and South façades comprise low, medium and high-level windows and shutters that act like a series of valves. These can be opened and closed in multiple configurations to regulate airflow, prevent rain, and provide shade while letting light in during the hottest or wettest seasons, Pomeroy Studio said. 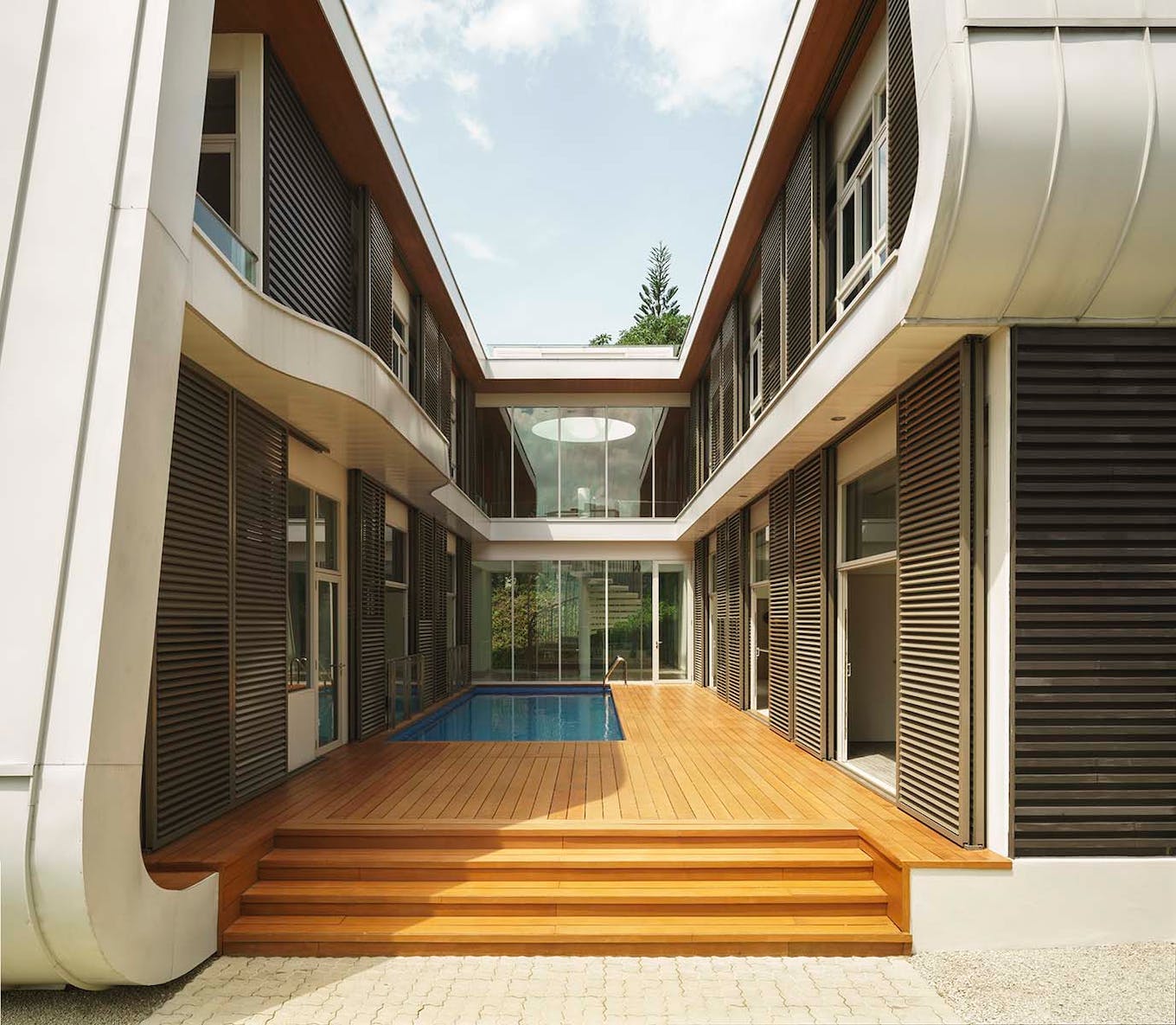 The courtyard of the B House. Image: Robert Such/Pomeroy Studio

The design of the house is modular, allowing prefabricated modules to be manufactured off-site, improving quality and reducing wasteful off-cuts, the studio said.

Furthermore, materials with low eco-toxicity and high recyclable content were used throughout, and water-harvesting equipment with a water saving system expected to save up to 465 cubic metres of water per year.

The B House was given the BCA Green Mark Platinum Award in 2014, the highest award for environmentally friendly buildings in Singapore.

Pomeroy said: “We are proud to have been able to push the boundaries of sustainable design at the same price point as the ‘business as usual’, whilst retaining a commitment to the culture of place.”