For writing about the country's biggest environmental disaster caused by a polluting steel plant last year, blogger Nguyễn Ngọc Như Quỳnh has been sentenced to 10 years in prison.

On April 6, 2016 dozens of tons of dead fish began washing ashore along Vietnam’s central coast. The phenomenon continued through the month, turning into what is considered the largest environmental disaster in the country’s history.

Fishing communities in Hà Tĩnh, Quảng Bình, Quảng Trị and Thừa Thiên-Huế provinces were decimated and left without a way to make income. Public blame for the disaster quickly fell on Formosa Ha Tinh Steel, a massive steel plant operated by the Taiwanese company Formosa Plastics, which reportedly discharged huge amounts of chemicals into the sea in the days before the dead fish appeared.

However, the Vietnamese government didn’t announce Formosa’s culpability until June 30, nearly two months after the disaster had unfolded.

This delay angered the public, leading to social media commentary and even demonstrations in Hanoi and Ho Chi Minh City, Vietnam’s largest cities. These protests were swiftly broken up by the government, and sites like Facebook and Instagram were blocked at times.

Each person only has a life, but if I had the chance to choose again, I would still choose my way.

These events brought the environment to the fore of public discussion in Vietnam and shone a spotlight on Nguyễn Ngọc Như Quỳnh, a blogger known as Mẹ Nấm, or Mother Mushroom.

The 37-year-old had been active online for years as a co-founder of the Network of Vietnamese Bloggers, a rare independent organisation among the country’s state-owned news agencies. 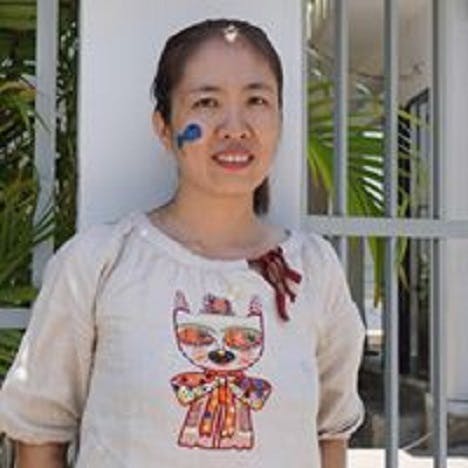 Mother Mushroom had written previously about environmental crimes and state repression, but the Formosa disaster drew major government attention to her writing.

On October 10, 2016, she was arrested while visiting a jailed dissident. She was accused of defaming the government.

Her Facebook page, which was last updated on May 13, 2016, features posts decrying pollution, a lack of government transparency and the need for a clean environment. It also shares pictures of alleged police brutality, another common theme in Quỳnh’s writing.

On June 29 of this year, Quỳnh was sentenced to 10 years in prison for “conducting propaganda against the state.” The decision was met with shock, both within Vietnam and abroad.

Members of local Facebook groups that rarely discuss Vietnamese politics shared the news of Mother Mushroom’s punishment widely. Many saw it as unfair treatment towards a woman who was simply trying to highlight environmental problems in Vietnam.

State-run media outlets reported Quỳnh’s sentencing, but made little mention of the issues she wrote about. Instead, they focused on official accusations such as publishing distorted information and abusing democratic rights, a commonly used but highly ironic charge in a single-party state.

The government, meanwhile, has been unrepentant. In March, Quỳnh received the International Women of Courage Award from First Lady Melania Trump. Vietnam reacted by saying this was “not appropriate and of no benefit to the development of the relations between the two countries.”

Condemnation from organisations like Human Rights Watch over Quỳnh’s arrest has had no impact, and there is fear that Mother Mushroom’s harsh sentence may deter other activists from speaking up on the environment, which is seen as one of the few sensitive subjects which citizens can openly discuss in Vietnam.

It appears likely that Quỳnh will serve her full term, though she remained defiant in the courtroom, which was guarded heavily during the completely closed one-day trial. Even Quỳnh’s mother wasn’t allowed to attend.

“Each person only has a life, but if I had the chance to choose again I would still choose my way,” the blogger said before her sentence was announced.