Volatile markets and fierce auctions resulting in thin profit margins are to blame, according to a global industry association. It asked for more government help to quadruple installation rates, to meet the global 2050 net-zero target.

The wind industry reported a slight dip in installed power capacity growth last year, according to a report by the Global Wind Energy Council (GWEC), a global industry lobby group.

Energy prices shot up dramatically at the start of 2021 as industry activity picked up after a year of lockdowns, while the shipping sector experienced massive backlogs, causing supply chain disruptions. 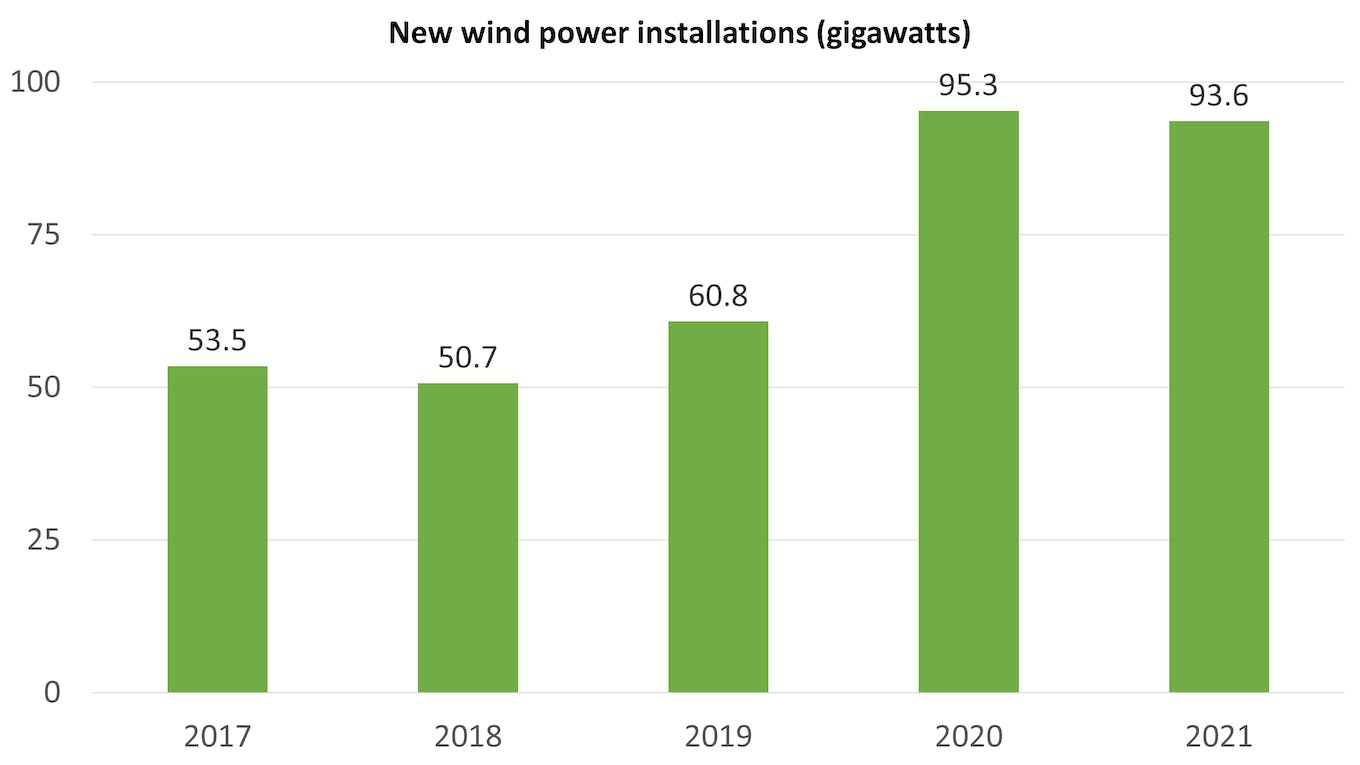 GWEC said that at current growth rates, the world will have under two-thirds of the wind capacity needed by 2030 to limit global warming to 1.5 degrees Celsius, a target scientists say will help to avoid the worst climate risks.

A quadrupling of wind power installations up until 2030 is now needed, the industry body added. Last year, it said a tripling of installations would be sufficient.

Onshore wind saw the most abrupt slowdown. Its capacity grew by 72.5GW, 18 per cent slower year-on-year.

Fewer projects were completed in both China and the United States, the two biggest markets for wind energy globally. GWEC attributed the trend to China ending fixed-price subsidies for wind power and supply chain disruptions due to the pandemic in the United States.

Meanwhile, the capacity of the more nascent offshore wind sector grew by 21.1GW. China contributed 80 per cent of the growth, leading global markets for the fourth year running. GWEC said there was a rush to complete offshore wind projects in the country as subsidies ended early this year and transitioned into competitive auctions.

Although wind power auctions increased over 150 per cent by capacity, pace slowed in Europe where the market is more mature. Low market activity was reported in Germany, Italy and Poland, and attributed to regulatory challenges.

GWEC said auctions are leading to a “race to the bottom in cost”, causing huge financial pressures. It said governments need to ensure sufficient incentives for renewable energy investments, while cutting red tape, ending subsidies for fossil fuels and improving the electricity grid.

“The wind industry continues to step up and deliver, but scaling up growth to the level required to reach net-zero and achieve energy security will require a new, more proactive approach to policy making around the world,” said GWEC chief executive Ben Backwell.

“The last 12 months should serve as a huge wake-up call that we need to move decisively forward and switch to 21st century energy systems based on renewables,” he added.

GWEC said that 557GW of wind energy capacity is expected to be added in the next five years, buoyed by ambitious national decarbonisation commitments and Russia’s invasion of Ukraine.

GWEC added wind energy firms can expect returns of around 6.6 per cent in 2026, if current policies remain unchanged. The forecast is slightly lower than the 7 per cent rate of return in the past few years.

The industry group said it expected “a wave of new policy initiatives” to bridge the gap towards achieving net-zero carbon emissions.

The last 12 months should serve as a huge wake-up call that we need to move decisively forward and switch to 21st century energy systems based on renewables.

The world’s top markets for new wind power installations are China, the United States, Germany, India and Spain. Brazil, Vietnam and the United Kingdom are also among the fastest growing markets.

All of these countries except Brazil, Spain and the United Kingdom also rank in the top 15 global users of coal, the most pollutive form of fossil fuel, complicating an energy transition that is currently too slow to curb ever-higher greenhouse gas emissions.

Total installed wind capacity worldwide is now 837 gigawatts — that is about 12 per cent of all methods used to generate electricity, including fossil fuels.