With the US halving its contribution to the Global Environment Facility, the oldest green fund sees first budget cut in 27 years, hurting the Least Developed Countries the most.

Industrialised countries will cut funding for the Global Environment Facility (GEF) from USD 4.4 billion in 2014 to USD 4.1 billion for the four year budget from 2018. The main reason is that the US government has pledged to slash its contribution by almost half, from USD 546.25 million it paid in 2014 to USD 273.2 million.

The result will be a cut in projects by the green fund that was set up on the eve of the Rio Earth Summit in 1992, under the leadership of another Republican Party President of the US, George Bush Senior.

This is a serious setback because GEF has been one of the world’s major sources of green funding for developing countries. It has given USD 17.9 billion to support a whole range of projects that combat climate change, restore degraded farmlands, protect biodiversity, clean up toxic chemicals, reduce the amount of poisonous mercury in the environment, tackle wildlife trafficking and so on. Its small grants programme has helped farmers in various developing countries adapt to climate change impacts, especially water shortages.

We cannot allow the US government to renege on its responsibilities just because President Trump refuses to acknowledge them.

Other countries have stepped up to fill the funding hole created by the US under President Donald Trump, but they have failed to do it all. Canada announced here that it will contribute USD 171.64, a major increase.

The announcement came too late to be included in the current edition of the GEF report (see table below). Germany, Japan, Britain and France are among other developed countries that have increased their contributions. Large developing countries have also stepped up to the plate, China increasing its pledge to USD 22 million, India to USD 15 million, South Africa to USD 6.87 million and Brazil to USD 6 million. 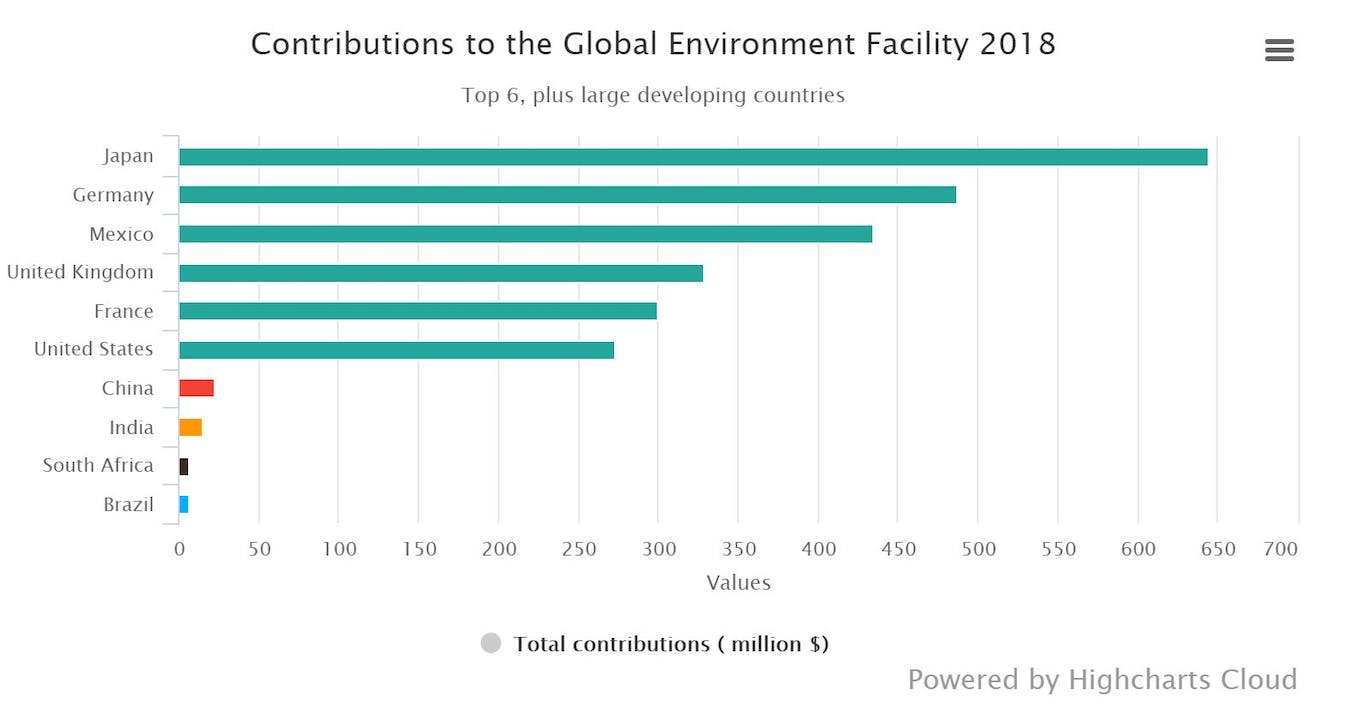 Despite these efforts, it was clear at the once-in-four-years GEF assembly going on in Danang, Vietnam, this week, that developing countries—especially the smaller ones—will struggle to find much-needed money to handle urgent environmental crises.

Cash dries up for the poorest

Leader after leader from small island nations such as Kiribati and the Marshall Islands stood up on June 27—the first day of the assembly plenary—to talk about how they are going to suffer due to the budget cut. As the sea level rises due to climate change, the very existence of some of these countries is in question.

One effect of the budget cut is that the GEF has decided that now even the poorest countries have to mobilise five times a GEF grant in co-financing before a project is approved. That means that for every dollar potentially available through a GEF grant, the government of a recipient country has to show that it can get five dollars from other sources. As the President of Kiribati pointed out at the GEF assembly plenary, Least Developed Countries (LDC) will find it very difficult to mobilise this level of co-financing.

For larger developing countries such as China, India, Brazil or South Africa, the co-financing requirement is nine times the original grant. A senior official in the Indian government’s Ministry of Environment, Forests and Climate Change told thethirdpole.net that the ministry officials are used to this and no longer find it difficult.

“There are many financial institutions, national and international, to which we can go, and we can get the co-financing,” the official said, speaking on condition of anonymity. “But it will clearly make things really difficult for the LDCs, specially the small island countries. I don’t know what these countries will do.”

Despite the confidence of the Indian bureaucrat, there had been furious opposition from the large developing countries during the negotiations for this round of GEF funding, when the US and a few other industrialised countries suggested that there be a new “index of development”, and countries that had developed beyond a certain point according to this index be ineligible to receive any funding at all.

Bureaucrats and diplomats from India, China and Chile told thethirdpole.net that they saw this as yet another attempt by the Trump administration and a few other industrial country governments to refuse to abide by their responsibilities for the harm they have caused to the world. “We cannot allow the US government to renege on its responsibilities just because President Trump refuses to acknowledge them,” a Chilean diplomat said.

It became clear from multiple sources that this issue had led to furore during closed-door negotiations before this GEF assembly, but nothing has come out of it so far. “The issue is not off the table,” a veteran UN official told thethirdpole.net. “But it has been kicked down the road.”

Reportedly, US delegates told India and China that large countries whose GDP had increased by over 5 per cent on an average over the last four years should be ineligible to receive any GEF funding. According to the US delegates, in Asia this would include China (with an average GDP growth rate of 8.2 per cent over the last four years), India (7 per cent) and Indonesia (5.6 per cent).

Unsurprisingly, delegates from these countries did not accept any of this. An Indonesian government delegate said if these countries were now to be judged according to these new criteria, they must also be judged by the amount of environmental benefits they give to the world by protecting their forests and so on. “If you want to do a full accounting, do so. Include all natural capital and let’s see what comes out. You’ll see how poorly the industrialised countries fare.”

Naoko Ishii, the head of GEF, confirmed to journalists that there would be no change in the methodology by which project proposals from countries were selected.