Global call seeks end to plastic bags, even 'green' ones

A global coalition of waste campaign groups - from South Korea to Philippines, from Montenegro to Botswana - has called on governments worldwide to phase out single-use plastic bags to reduce pollution in oceans and landfills.

To mark the 6th International Plastic Bag-free Day on July 3, environmental groups led by the Global Alliance for Incinerator Alternatives and Zero Waste Europe organised various campaigns to raise awareness on the damaging impact of plastic bags and urged governments to initiate policies banning or regulating their production, distribution, consumption and disposal.

Plastics bags are widely used in households and wet markets for food storage. Consumers worldwide use about 2 million plastic bags every minute, the United Nations Environment Programme (UNEP) said in a report last year. Their damage to marine ecosystems totals US$13 billion every year, UNEP added.

Scientists have reported that plastic kills many animal species - from camels to birds and turtles - and that the disintegrated plastic remains in animals’s body parts, possibly entering the human food chain.

Despite a growing number of cities and countries banning or regulating single-use plastic bags through taxes, many parts of the world have not acted on regulating their proper disposal.

In Asia, Bangladesh is known for leading the region in the banning of plastic bags since 2002, which were blamed for clogging drainage systems and causing catastrophic flooding in its cities.

Plastic bags can be recycled, but are not commonly included in the list of items that recycling companies or waste management firms take back from consumers. Even in developed countries like Australia, waste collection companies do not allow plastic bags to be thrown in their recycling bins as they could get tangled in the machines sorting the thrash.

In the Philippines where a huge amount of this type of plastic is used and where ecological solid waste management remains a daunting task for some cities, used plastic bags - often wet and filled with food waste - end up in landfills or, worse, in drainage systems and canals. 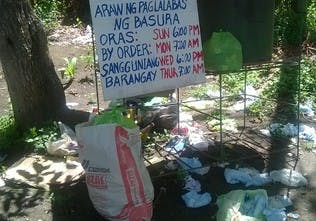 Zero Waste Europe also noted in the statement that 92 per cent of Europeans surveyed last year by the European Commission agreed that there should be measures in place to reduce the use of single-use plastic items such as shopping bags.

The group, together with Fundació Prevenció de Residus, Friends of the Earth Europe, Surfrider Foundation Europe, and the European Environmental Bureau, urged EU member states to act on the damaging effects of plastics - including ‘degradable’ bags - to the environment.

In Manila, the EcoWaste Coalition, Global Alliance for Incinerator Alternatives, Greenpeace, Mother Earth Foundation, and Earth Island Institute held a forum on the same day to address the myths behind ‘degradable’ plastics.

They clarified that this type of plastic bags which disintegrate much faster than the regular ones are problematic and not really environmentally friendly.

Environmental science professor Rosario Wood of Miriam College said during the forum that not all degradable plastics are truly bio-degradable. “Oxo-degradable plastic bags, as an example, merely crumble into super tiny bits of plastic, which turns them into a lot more problematic pollutants as they now easily get dispersed into the environment, making their clean-up more difficult,” explained Wood.

An industry group producing and selling oxo-biodegradable plastic, however, makes the case for promoting the plastic. The Oxo-biodegradable Plastics Association, a non-profit group with more than 1500 members worldwide, says on its website that the plastic it promotes disintegrates without releasing heavy metal residues into the environment.

Degradable plastic bags will not help solve our environmental problems concerning waste and pollution, as their use will merely instill and promote further the throwaway attitude and culture.

The manufacturers point to a life cycle assessment conducted by certification firm Intertek in 2012 which showed that conventional and oxo-biodegradables have a smaller environmental impact than bio-based plastic or paper bags.

While there is very little difference in carbon footprint in terms of production of conventional bags and oxo-biodegradables, the group says its product’s edge is its ability to degrade in an open environment.

For Philippine NGOs, the call for a national ban on bags have little to do with degradability because banning single-use plastic does not actually promote waste reduction.

“Degradable plastic bags will not help solve our environmental problems concerning waste and pollution, as their use will merely instill and promote further the throwaway attitude and culture that have so permeated modern society,” said Sonia Mendoza, president of the EcoWaste Coalition.

The campaign groups stressed that there is no better substitute to plastic bags than reusable bags that are made from natural fibers.

“Promoting the use of reusable bags and containers, such as when going to the market, reverses wasteful attitude and instills among the citizenry a consciousness of being responsible and sustainable, one that our society needs toward a genuine zero waste society,” commented Mendoza.