Get a free beer if you recycle at this bar

Asia Pacific Breweries (APB) treated beer-lovers to complimentary bottles of Tiger Beer at a bar in Singapore last week—but it came with a catch.

Visitors to Kult Kafé could only redeem their free bottle of beer by bringing their own glass or plastic bottle or aluminium drink can to the bar. The collected items were then recycled.

The pop-up bar was constructed using 1,750 beer crates and repurposed materials from past roadshow events. Partly powered by solar energy, the bar mirrored how energy is used at APB’s headquarters—one fifth comes from solar power generated by more than 8,000 solar panels on the brewery’s rooftop.

“Businesses like ours must set an example and work with like-minded partners to drive change. A pop-up bar provides a conceptual blueprint for how future F&B businesses could operate in a sustainable way, and we hope this will encourage and inspire both businesses and individuals to come together and create a more sustainable Singapore,” said Mitchell Leow, corporate affairs director, APB Singapore. 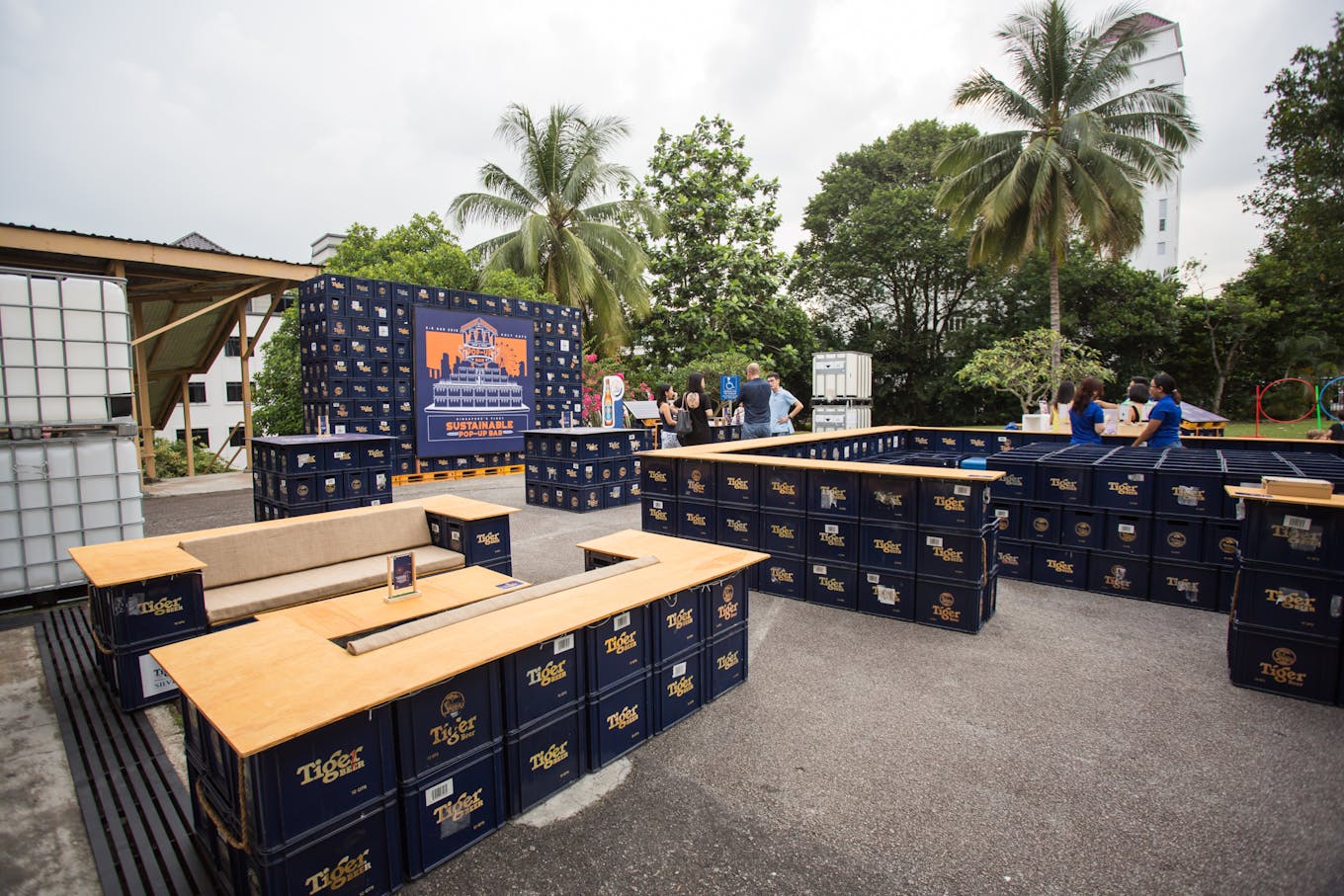 Beer production and storage items such as crates, kegs, and intermediate bulk container (IBC) tanks were used as construction materials and seating for the bar.

The event was held at a time when Singapore is struggling to develop recycling culture; the city-state’s domestic recycling rate declined last year, and the country’s only landfill site, at Pulau Semakau, is projected to run out of space in less than two decades. 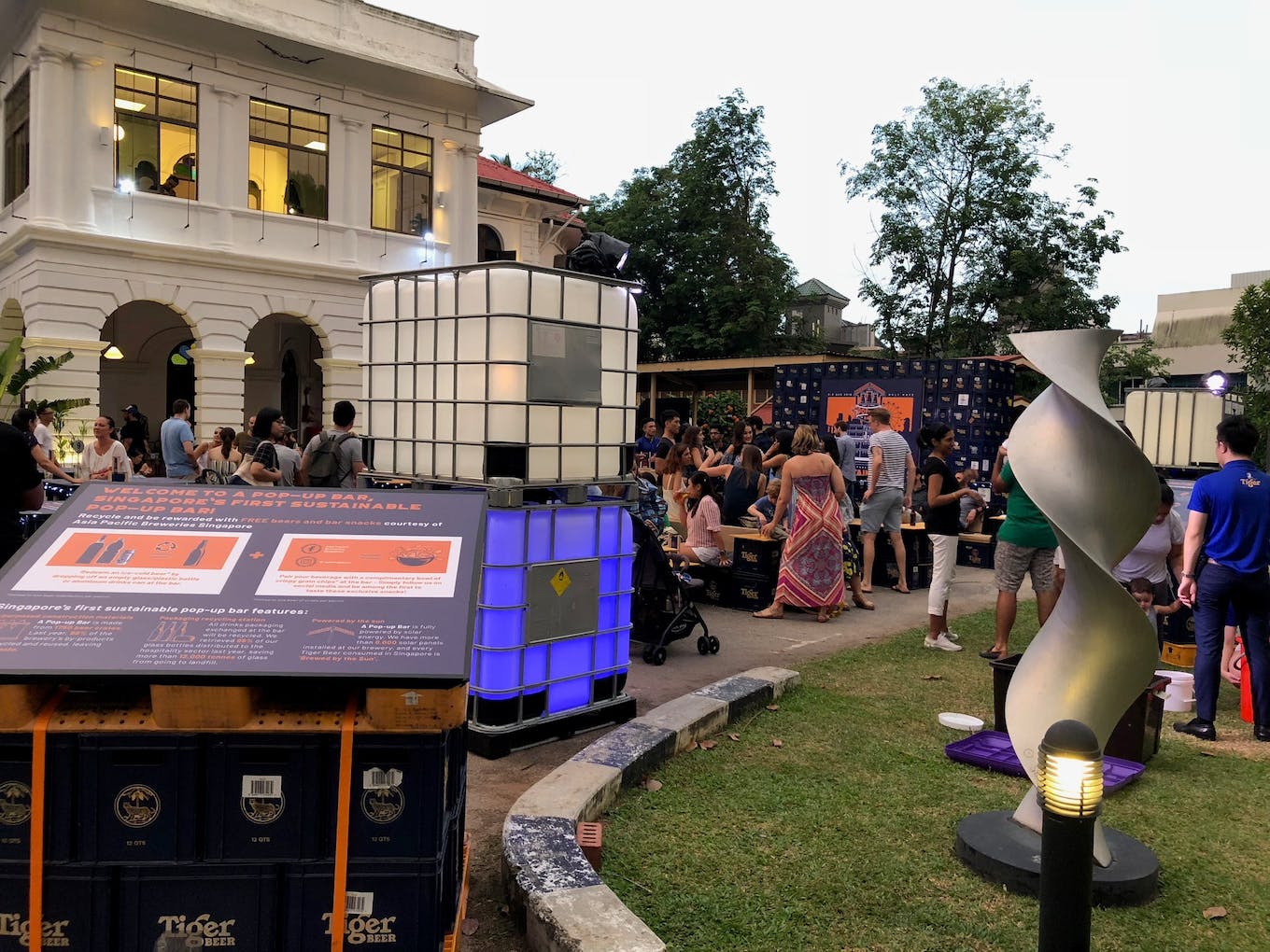 The bar constructed at Kult Kafé was partially powered by solar energy and recycled the glass, cans, paper and cardboard used. It is also the first bar in Singapore to introduce metal straws in place of plastic and uses only biodegradable straws and food packaging during events.

Last year, APB Singapore said it retrieved approximately 86 per cent of glass bottles distributed to the hospitality sector, amounting to more than 12,000 tonnes of glass saved from the city-state’s incinerators. According to APB, the brewery recycled more glass than all Singaporean households combined.

The one-off event was part of APB’s long term sustainability campaign that includes efforts to reduce the volume of water used to brew its beers, use solar energy to power its plants, and recycle 99 per cent of its by-products such as spent grains and packaging materials.

Available for sampling for the first time at the event was a bar snack made from spent grains to be drunk with Tiger Beer. The snack, which has yet to be named, is being trialed and maybe rolled out commercially later in the year. 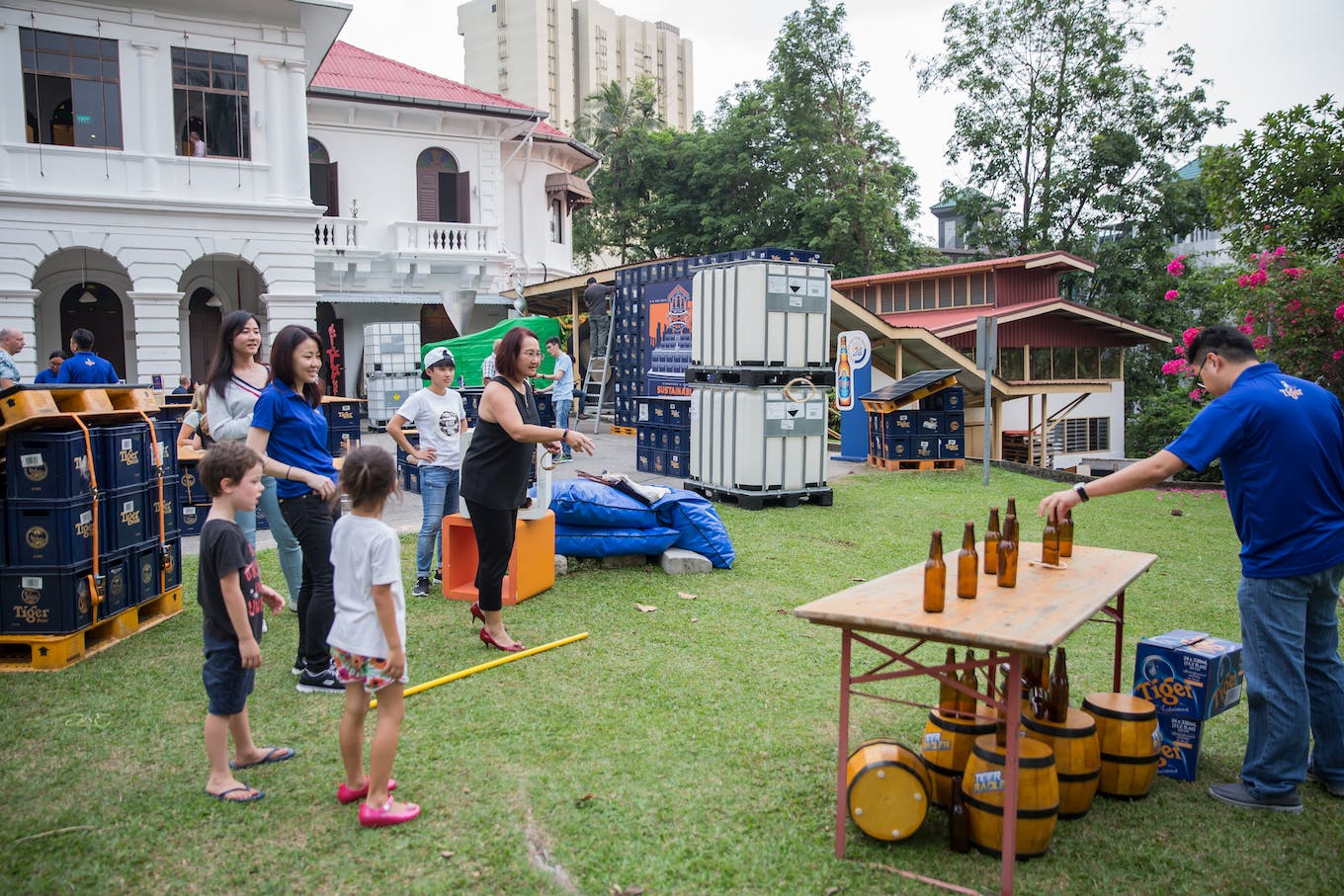 Not just open to beer drinkers, young and old alike enjoyed the pop-up bar by playing mini-games to test their knowledge on recycling.