Green groups are lobbying for the International Civil Aviation Organisation to include the UN's REDD+ scheme in their carbon credit programme.

Environmental groups and investors on Monday called on the International Civil Aviation Organisation (ICAO) to formally recognise carbon credits from protecting forests as a way to fulfill its emissions cuts, saying this will also simultaneously address another climate threat: deforestation.

In a briefing paper titled ‘Linking Flights and Forests’, nine non-government organisations said that energy efficiency improvements alone will not be enough to halt the aviation industry’s emissions by 2020 and achieve carbon neutral growth from then onwards, as it pledged to do in 2009.

The sector is today one of the world’s biggest carbon polluters, which spewed about 771 million tonnes of carbon dioxide into the atmosphere in 2014. By its own estimate, emissions could triple or quadruple by 2040 thanks to growing demand for air travel.

This would leave the industry with an ‘emissions gap’ of about 7.8 billion tonnes of carbon dioxide, which it will need to cut in order to meet its climate targets. 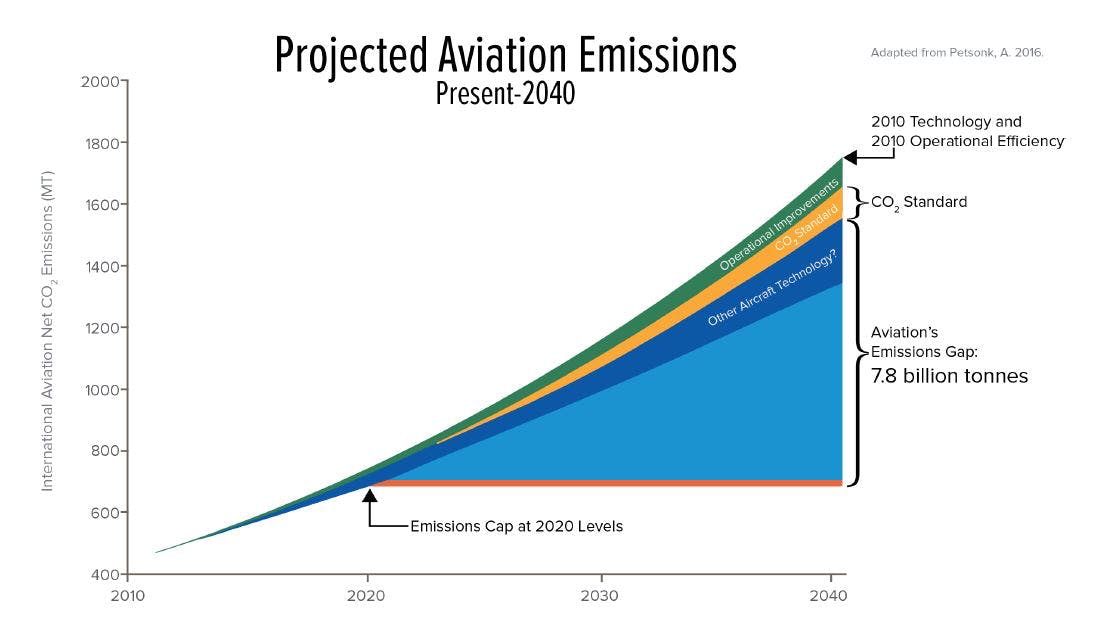 The sector will have to rely on carbon offsets to plug this gap, and the ICAO - the United Nations agency for aviation - should allow the UN’s scheme for financing forest protection as a source of carbon credits, said the group of NGOs which included the UK-based Global Canopy Programme, US-headquartered Conservation International and Verified Carbon Standard.

A carbon credit is a financial instrument where companies can fund projects such as energy efficiency or reforestation initiatives which avoid greenhouse gas emissions, with each tonne of carbon dioxide saved making up one credit. Organisations can use these credits to claim emissions reductions of their own.

Andrew Mitchell, founder director, Global Canopy Programme, noted in a statement that “harnessing the aviation’s sector’s commitment to address its carbon emissions to help reduce global deforestation is one of the most compelling ways to slow climate change”.

“ICAO and the world should seize this opportunity to meet its climate objectives,” he added.

Known as Reducing Emissions from Deforestation and Forest Degradation, or REDD+, the UN scheme places a financial value on the carbon stored in forests, and allows wealthy countries to pay developing nations to protect their forests instead of clearing them for agriculture, urban development, or other uses, by buying REDD+ credits.

The money spent on each credit can support activities such as restoring degraded forests, stepping up conservation efforts and promoting the sustainable management of forest stocks.

First mooted in 2005, the scheme was recognised by the UN Framework Convention for Climate Change as a climate mitigation option in 2007. It received renewed endorsement from the global community at the UN climate conference in Paris last December.

One of the biggest REDD+ agreements to date is a pledge by Norway to pay Indonesia up to US$1 billion to reduce its emissions from deforestation.

However, there is currently a chasm between the amount of money pledged for forest conservation under REDD+ and actual funds disbursed. The scheme has been slow to take off globally due to uncertainties on how tropical forest nations will use the funds paid by wealthier countries, a lack of demand for forest carbon in global markets, and a complex administrative process, among other reasons.

The aviation industry is currently deciding on a mechanism called the Market Based Measure (MBM) to facilitate the purchase of reliable, transparent, and cost-effective credits.

By allowing REDD+ credits in the MBM, the sector will not only meet its own carbon neutrality targets, but also accelerate funding for REDD+ and increase demand for the scheme, thus helping stop deforestation, one of the key causes of climate change, said the report’s authors.

They stressed that the MBM, which will be finalised and adopted at the organisation’s 39th annual assembly this September, is a key means to help the sector bridge its emissions gap.

“The MBM has the potential to drive substantially more investment at all scales to finally turn back the clock on deforestation”, he added.

In a separate report released on the same day, the Climate Markets and Investment Association (CMIA), a United Kingdom-based industry association for climate finance, also issued a policy paper arguing that the rapidly growing aviation sector could meet its carbon neutrality goal by supporting REDD+ projects.

Christina Elvers, co-chair of CMIA’s forestry, land-use and voluntary markets forum, noted that “we hope (ICAO) and the aviation industry will consider very seriously the opportunities that forest projects can offer them to invest in good-quality emissions reductions projects”.

At the time of publication, ICAO did not respond to a query on whether they would adopt REDD+ into the MBM.