Floating wind shapes up as wind industry's next frontier

Floating turbines could unlock vast clean energy potential. But as the industry gains momentum, stronger government support and coordination among stakeholders are needed to address its biggest challenges: investor confidence and cost.

Being an industry pioneer is hard work. To bring groundbreaking technologies to the market, one must, after all, venture into uncharted waters. And 12 years ago, Norwegian energy giant Equinor did so quite literally.

Formed by a merger of two oil and gas firms, Equinor decided in 2009 to tap into its decades’ worth of offshore drilling expertise to take wind power technology further out to sea, into deeper waters. If drilling rigs can float, it thought, why shouldn’t wind turbines be able to?

The company spent eight years testing a floating turbine prototype off Norway, before completing the world’s first commercial floating wind farm, Hywind Scotland, 29 kilometres off the coast of Scotland in 2017.

The five turbines, built in 105 metres of water with a total capacity of 30 megawatts, have since then been operating as the world’s largest testbed for floating wind, generating enough electricity to power 20,000 homes in the United Kingdom.

Offshore wind is poised to play a central role in the energy transition. From just a tiny fraction of global electricity supply today, the industry is forecast to grow by 13 per cent annually over the next two decades, offering US$1 trillion in business opportunities.

The problem is, conventional, fixed-bottom turbines—which are built from the ground up—are limited to relatively shallow water with a depth below 60 metres. To help nations hit clean energy goals, the sector will need to harness wind potential further offshore.

Doing so comes with challenges. Yet the technology—turbines mounted on floating foundations—is maturing fast, and numerous demonstration projects are underway, including in Asia. 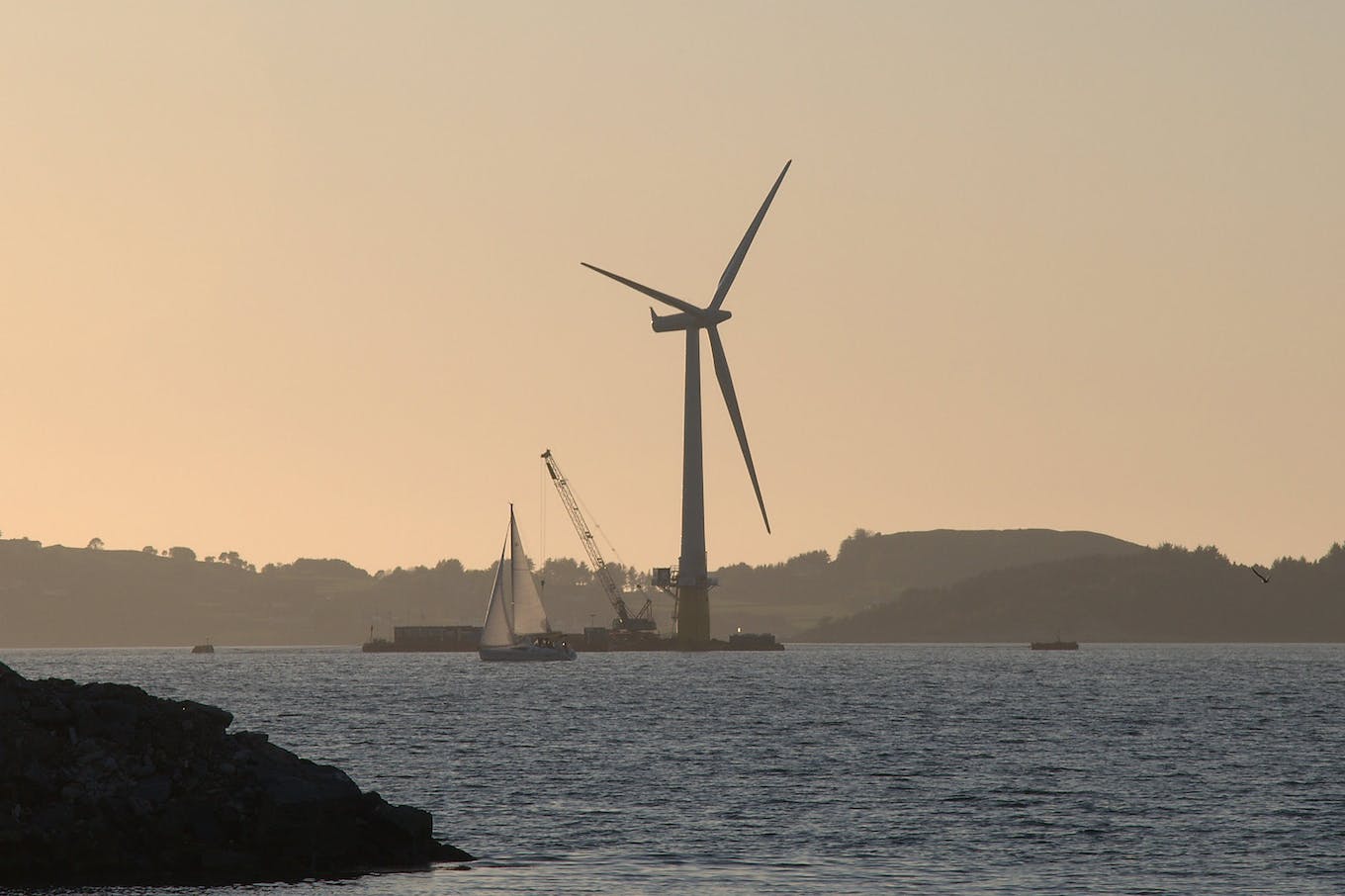 Getting banks on board

What is needed now, according to experts, is a bending of the cost curve. That will require a ramp-up of production to achieve economies of scale. And that means the sector must grow investor confidence, and governments increase their support.

Speaking last week at a virtual event titled The Transition Faster Conference: Let’s Talk Wind and hosted by multinational certification firm DNV GL, the experts said as with any emerging technology, financiers will be reluctant to commit to floating turbines at an early stage due to risks associated with insufficient investment track records.

“Successful prototypes and demonstration projects have provided confidence to the industry that floating wind is technically feasible,” he said. “It now takes the right policies and financial incentives to attract investment and establish efficient supply chains. Only then will we be able to push down costs.”

Much will also depend on how quickly sector participants can settle on technology standards and develop cost-effective, safe solutions for constructing and assembling turbines offshore. Cutting technology risks can bring comfort to banks in the long run, but industry stakeholders will need to come together and draw from the oil and gas and offshore wind industries’ experience to do so, said Sebastian Bringsværd, head of floating wind at Equinor.

“It takes more than one particular process or technology to make floating wind work,” he observed. “We need to take familiar technology from oil and gas and combine it with existing offshore wind technology. It is crucial that the industry builds on lessons learned in these sectors.”

Freeing offshore wind farms from ground-mounted designs brings wind power in reach of much more of the global population. It gives developers access to many more potential project sites, and a lot more capacity.

In the United States, for example, it is estimated that about 60 per cent of available offshore wind resources are beyond the grasp of fixed-bottom foundation turbines. Similar challenges are facing the industry in Japan, where an estimated 500 gigawatts in offshore wind potential—almost double the nation’s total installed electricity generation capacity—are waiting to be exploited.

In other words, floating wind opens a world of new economic opportunities—and not just for turbine manufacturers who can access new markets for their products.

Since floating wind draws on the drilling industry, oil and gas companies, too, could benefit by repurposing their platform expertise. As could shipyards that provide floating structures for the nascent sector.

In Asia, three primary markets are currently being evaluated for the technology. In South Korea, a coalition of corporates signed a Memorandum of Understanding with the city of Ulsan for a floating wind capacity of up to 7 GW to be installed in the coming years. Japan’s Offshore Wind Promotion Law, introduced in 2019, regulates auctions for offshore wind development in open seas. In China, renewable energy firm MingYang plans to build its first floating turbine off the coast of Yangjiang City this year.

By 2050, DNV GL predicts the installed floating wind capacity will grow from 100 megawatts currently to 250 gigawatts—more than 20 per cent of the offshore wind market, and around 2 per cent of the world’s power supply. Over the same time period, the cost of the technology is expected to plummet by more than two-thirds.

Henrik Stiesdal, who built his first wind turbine in 1976 and is chief executive officer at wind power company Stiesdal Offshore Technologies, said floating wind is now at a turning point. As it takes its first steps towards commercial uptake, it stands where conventional offshore wind stood in the early 1990s.

“People spoke a lot about offshore wind in the 1970s,” he said. “But it wasn’t until the Danish government decided in 1989 to promote demonstration projects in Danish waters that we got machines up and running. Since then, it has been a huge success.”

The years ahead will tell whether floating turbines can gain enough traction to follow in their fixed-bottom counterparts’ footsteps. “Floating wind needs more early projects,” said Stiesdal. “It needs to scale up as early as possible to make sure low-cost turbines are available when the world needs them.”