A new initiative by TUV SUD PSB and the German Investment & Development Corporation trains SME managers in Indonesia to help them manage their energy use for more efficient business growth.

By 2030, Indonesia may be the world’s seventh largest economy, with rapid urbanisation and a burgeoning middle class driving its domestic consumption and economic growth at a rate comparable to that of India or China, says research by the McKinsey Global Institute (MGI).

This pace of growth will inevitably drive a high demand for energy, observes MGI, which estimates that Indonesia’s energy consumption by then may rise as high as nearly a quarter of current global electricity production – 17 quadrillion British thermal units or 5,000 terawatt-hours, to be precise.

The steep demand, combined with Indonesia’s dubious status as one of the world’s top emitters of greenhouse gases, has been the impetus behind a number of government policies to drive cleaner forms of energy and improve energy efficiency. In 2009, for example, the Indonesian government pledged to cut its greenhouse gas emissions by 26 percent by 2020.

Private sector companies such as TUV SUD PSB are following the lead and creating their own solutions and programmes. The international provider of product testing, inspection and certification services, which has been operating in Indonesia for more than 10 years, launched a new initiative last January to help Indonesian small and medium enterprises (SMEs) reduce their carbon footprint.

In partnership with the German Investment & Development Corporation (DEG), TUV SUD Indonesia created a year-long programme called the ‘Energy Efficiency and Carbon Footprint Project’ to train the energy managers of local SMEs located in Jakarta and Surabaya at no cost to them.

The project targets SMEs for economic and demographic reasons: They contribute more than 60 percent of Indonesia’s total GDP and employ a comparable proportion of the workforce. Any effort to implement energy conservation needs to involve them, says Eric Paulson, general manager of TUV SUD Indonesia.

Despite the Indonesian government’s efforts to promote energy conservation, the take-up rate among local SMEs has been slow due to a combination of low awareness, lack of resources, and complacency brought on by the easy availability of energy in their business environment, observes Paulson, who is based in Jakarta.

Due to the generous subsidies previously offered by the government, energy has been cheap and readily available in Indonesia. “So some Indonesian SMEs may not want to implement energy conservation initiatives, thinking that such acts are extra, avoidable expenses,” he explains.

Getting the project started was quite a challenge because of that mindset, but the partnership with DEG quickly overcame that barrier as it is well-established in Indonesia and its involvement helped the project gain credibility among Indonesian SMEs, he says.

Imparting “the skills to fish”

Under the programme, SME managers learn to audit, benchmark and reduce their businesses’ energy consumption with minimal disruption to their business.

About 70 SMEs have taken up the “fishing” lessons, he says. They undergo three phases of training, which is carried out via seminars: awareness building, capability development, and evaluation.

During the training, they are introduced to international standards such as ISO 50001 and good energy management practices. They are also offered the opportunity to undergo on-site energy and greenhouse gas emission assessments conducted by TUV SUD.

The skills and knowledge gained will last for the lifetime of each company – and beyond it.

During the assessments, TUV SUD helps each company measure and verify its energy consumption, then provides advice on ways for it to be more energy efficient. The recommendations may involve upgrading equipment to make it less power intensive or rescheduling operating periods to minimise idle capacity, among other measures.

The participating SMEs have been very pro-active about attending training sessions and communicating their expectations and needs, and have found the project useful in helping them understand their energy usage and how to decrease it, says Paulson. 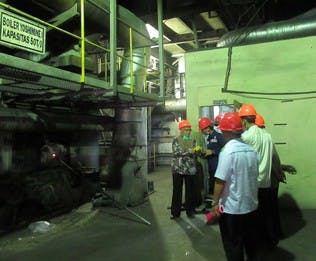 One participating firm, PT. Indobaja Primamurni – a spring steel manufacturer based in East Java – listed significant cost reductions and energy savings among the benefits of the project.

The company gained a better understanding of how much carbon emissions its activities generate, says its spokesman, and was able to discover new energy saving opportunities.

Some of the changes it has since implemented include upgrading its compressor units without inverters to ones with inverters, and modifying its engine control with improved cooling systems.

After the project ends, the SMEs are expected to continue with their energy conservation programmes. PT. Indobaja, for example, is now forming a dedicated team specially for handling energy saving matters.

Paulson says what is key is that SMEs in the project will now be able to continue their energy conservation initiatives independently, as they now have trained employees who are qualified energy managers,

“The skills and knowledge gained will last for the lifetime of each company – and beyond it,” he says.

“These SMEs become industry role models,” Paulson says. “Other SMEs or even bigger corporations will be more motivated to follow in their footsteps. This, to us, has the most significant, long-term impact.”

CSR with a difference

A year on, the CSR initiative has been warmly received by local SMEs. Although the project is due to conclude in March, TUV SUD has already received requests from SMEs outside Jakarta and Surabaya to roll it out in other cities.

Describing the response from both the initial participants and other SMEs interested in the project as “overwhelming and encouraging,” Paulson says that the initiative’s success bodes well for more such programmes in the future.

Eventually, he hopes, TUV SUD will be able to implement similar projects in other Southeast Asian countries.

“TUV SUD was founded almost 150 years ago with the principle of protecting people, environment and property against the adverse effects of technology,” he explains. “We support our customers in their efforts to strike a balance between quality, profitability and sustainability.”