Filipinos march for a ban on coal expansion

A collective of 50 civic society groups is calling on President Rodrigo Duterte to enact an executive order to stop more coal-fired power plants being built in the climate-vulnerable country.

From the Philippine capital of Manila to the hometown of President Rodrigo Duterte himself, Davao city, more than 50 civil society groups and people’s organisations participated in a nationwide protest on Tuesday, urging Duterte to heed their call to impose a moratorium on new coal-fired power plants.

The People for Power Coalition, a network of civil society organisations, consumers and communities campaigning for a shift to renewable energy reiterated this demand amid the Department of Energy’s (DOE) alleged display of “disobedience” to Duterte’s earlier pronouncement to accelerate the country’s transition to clean energy.

Duterte said in his fourth State of the Nation Address on 22 July 2019 that the development of renewable energy sources must be “fast-tracked” and that the country’s “dependence” on dirty energy must be reduced.

“How dare you, [energy secretary] Alfonso Cusi?” said Gerry Arances, national coordinator of the Philippine Movement for Climate Justice, one of the member-organisations of the coalition, in an interview on the sidelines of the protest held in front of the presidential palace in Manila.

“To echo [the teen instigator of climate action movement Climate Strike] Greta Thunberg, how dare you? You’re killing people who pay for their electricity by pushing for the approval of coal-fired powerplants,” he said.

Finally, we have a president who said that our dependence on coal must be reduced. But he must give teeth to this marching order.

Under a business-as-usual scenario, greenhouse gas emissions from coal are estimated to comprise 52.4 per cent of the annual 396.9 million metric tonnes of carbon dioxide in 2040, according to the Philippine Energy Plan.

Unabated use of coal and fossil fuels could lead to dangerous levels of global warming, exceeding the limit of 1.5 degrees Celsius set by the Paris Agreement. Urgent action to mitigate emissions is a must, as stressed by the 16-year-old Thunberg at the UN Climate Action Summit in New York.

Without deep emission cuts, climate change hazards such as floods and droughts could affect countries like the Philippines partcularly badly, ravaging agricultural productivity and hurting economies.

It is against this backdrop that Arances said Duterte must issue an executive order within the year to give the energy department’s leadership a much-needed push. Cusi said earlier this month that a “moratorium on any tech might be a disservice to our energy security”, thumbing-down the proposed rejection of further coal-fired power plant projects.

“Finally, we have a president who said that our dependence on coal must be reduced. But he must give teeth to this marching order,” Arances said. “Issue an executive order. Walk the talk”.

The executive order, which the People for Power Coalition has pushed for since July, must also include an audit of existing coal fired power plants and a clear policy to expedite the country’s transition to renewable energy. 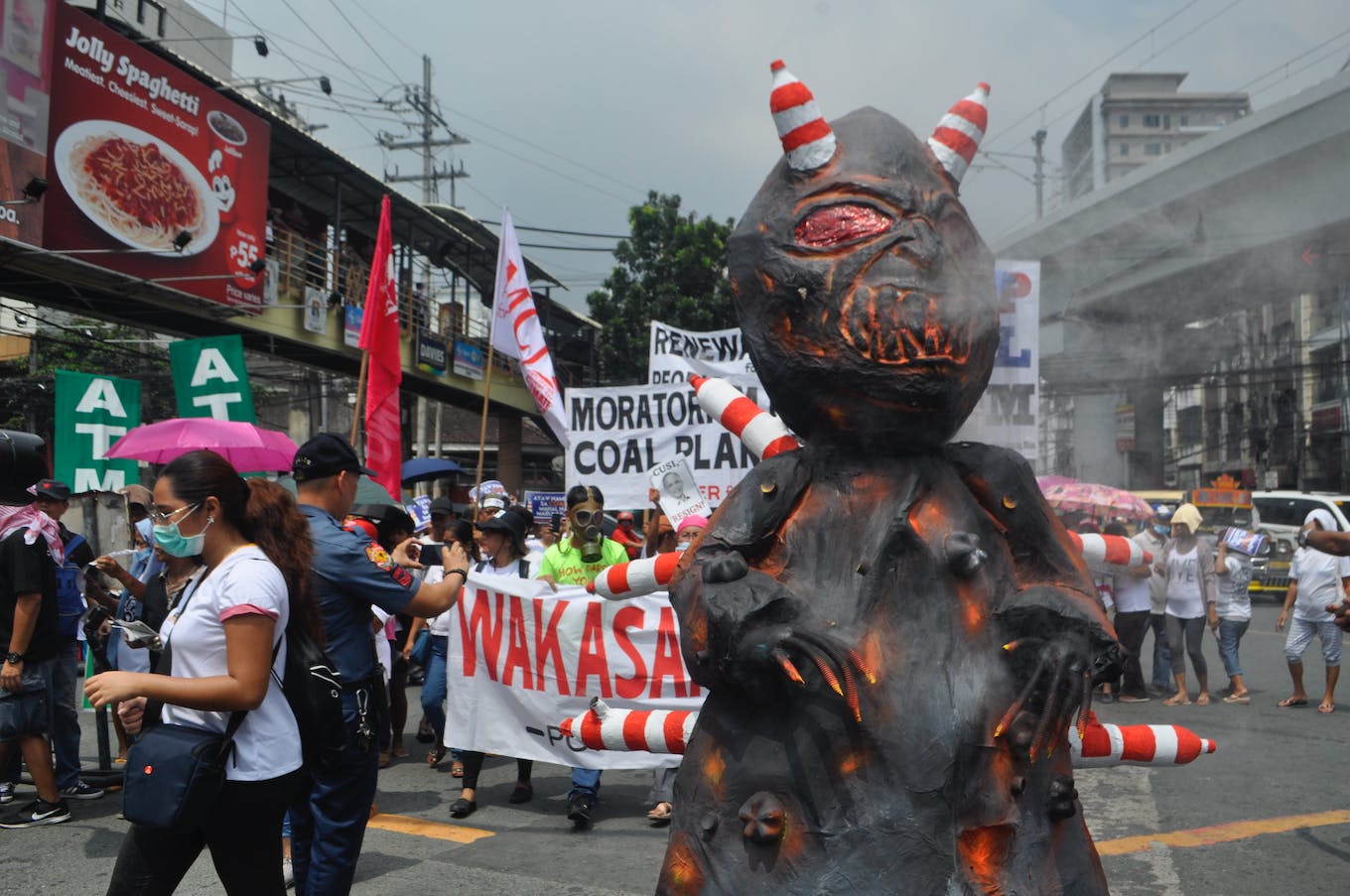 A demonstrator dressed in a coal costume rallies against coal expansion in Manila. Image: Purple Romero

The Philippines can tap geothermal, wind, solar and hydropower energy, but DOE figures show that the Philippines may not be able to meet its target of tripling renewable energy capacity from 5,438 MW in 2010 to 15,304 MW by 2030. Local news organisations reported that as of 2017, only 7,000 MW were added.

The DOE aims to review its national renewable energy plan in October.

But as it is, coal remains king in the Philippines – along with oil, it currently comprise more than half of the Philippines’ energy mix. In 2016, the DOE issued another 30 coal operating contracts for development and production.

The nationwide action against coal aims to stop projects currently in the pipeline. In Palawan, an ecological frontier, the Palawan Alliance for Clean Energy (PACE) and the Save Palawan Movement staged a protest against the planned coal plant of DMCI.

“The coal issue is alive again because the Department of Environment and Natural Resources finally granted DMCI’s coal plant an ECC (Environmental Compliance Certificate). Despite this, a lot of things can still happen. It can still be stopped. People in Narra (where the coal plant will be put up) are opposed to it and were not properly consulted,” PACE spokeswoman Cynthia Sumagaysay-Del Rosario said.

Arances said they are trying to engage the mayor of Narra to reject the coal plant, even as the governor of Palawan, Jose Alvarez, has already backed it.

It is the local dynamics between public officials that could spell a no or a go for coal plants in cities and provinces.

“In Negros, we already saw that we can go renewable,” Arances said. The governor of the province of Negros Occidental issued a local executive order in March 2019 banning the entry of coal-fired power plants. His successor in the May 2019 elections vowed to stand by the said policy.

Similar campaigns in other provinces are trying to replicate the success of Negros Occidental. But if Duterte issues a national executive order, coal plant projects in every nook and cranny of the country will be stopped immediately.

If he does so, it will be akin to Duterte coming full circle, whom as mayor of Davao city in 2014 grappled with the dilemma of giving the green light to a coal fired powerplant amid a projected power crisis.

“Back then, he asked us – do we have alternatives?” Arances said. “Back then it was hard to see that renewable energy would be cheaper than coal”.

The costs of renewable power generation have declined in 2018, according to a study by the International Renewable Energy Agency (IRENA).

By 2020, global data from IRENA shows that “over three-quarters of the onshore wind and four-fifths of the utility-scale solar PV project capacity due to be commissioned in 2020 should provide lower-priced electricity than the cheapest new coal-fired, oil or natural gas option”.

Another study focusing on the Philippine context published in September, titled Prospects Improve for Energy Transition in the Philippines, found that if renewables enter the market at scale, they have the potential to cut wholesale power prices by 30 per cent.

“It is not yet too late,” Arances said. “Within the year, we are hoping that the executive order will be issued. This is a win-win for the people”.