'Climate-themed' funds sold by some of the world's biggest asset managers are failing to live up to the climate goals set out in the Paris Agreement. The screws are being tightened on managers of ESG-labelled investment funds as a result.

Green funds sold by some of the world’s biggest asset managers are failing to live up to the climate goals set out in the Paris Agreement, according to an industry analysis by think tank, InfluenceMap.

InfluenceMap looked at 723 equity funds that were marketed as environmental, social and governance (ESG) or as climate-related, representing more than US$330 billion in total net assets.

Using a scale from minus 100 per cent to plus 100 per cent, it ranked funds according to how well they were aligned with the goals set out in the Paris Agreement, with a negative score indicating a portfolio with too much brown or too little green.

In the broad ESG category, 71 per cent generated a negative score “indicating the companies within their portfolios are misaligned from global climate targets,” according to InfluenceMap’s report published in August. 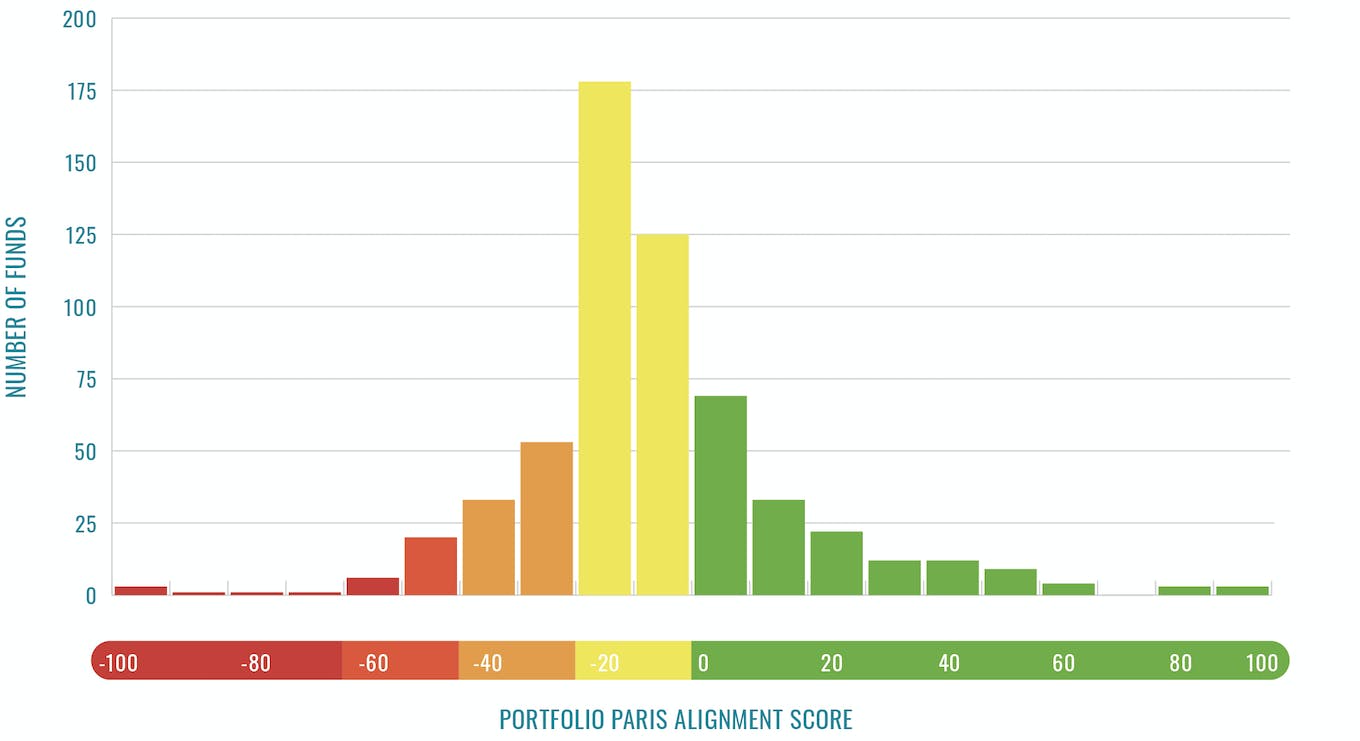 The report, which used the Paris Agreement Capital Transition Assessment, found that among “climate-themed” funds, about half of 130 funds examined by the non-profit, which collectively hold more than US$67 billion in assets, were found to be misaligned with the Paris Agreement goal of limiting global warming to well below 2°C.  The analysis found that they often hold shares in large polluters including big oil companies.

The worst climate-themed funds are run out of China, which had the lowest score of minus 43 per cent. London-based Impax Asset Management had funds the most aligned with the Paris accord, scoring 91 per cent, InfluenceMap recorded. 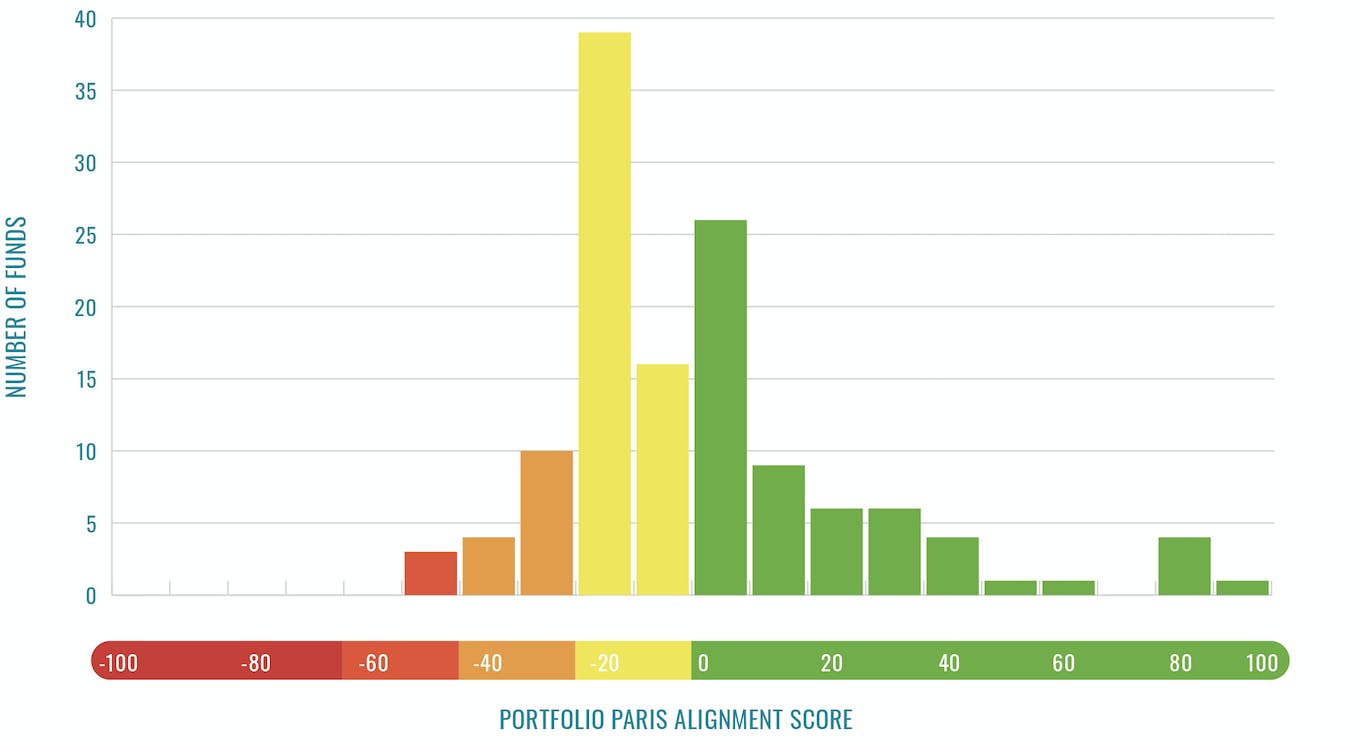 The analysis showed a “very large variation,” with some funds scoring as high as 90 per cent. The review determined that, generally, there is a “lack of consistency and clarity” in how asset managers are labelling their funds, which “makes if difficult for investors to determine what these funds’ descriptors mean in practice,” amid a blackhole of uniformity in regulations.

“There is very little consistency. When looking at the market as a whole, there is a lack of transparency towards investors as to how branding relates to the impact the fund is aiming to achieve,” said InfluenceMap analyst Daan Van Acker.

Financial products labelled as sustainable, responsible and green have soared in popularity in recent years. Sustainable investing assets ballooned last year to more than US$35 trillion, according to the Global Sustainable Investment Alliance (GSIA), a group of the world’s largest green investment funds.

InfluenceMap’s findings coincide with increasing concerns about the authenticity of ESG labelled funds that have been criticised for having links to polluting companies and questionable social and environmental standards.

“It’s not necessarily surprising, considering how fast its grown, that there has been this lack of consistency, and with that a lack of regulation,” Van Acker told Eco-Business.

Asset managers are increasingly likely to find themselves in the firing line for greenwashing, where the environmental benefits of funds are exaggerated or misrepresented.

Investor anxiety about being duped are not unfounded. In Europe, fund managers have stripped the ESG label off US$2 trillion in assets ahead of more stringent regulations. The US Securities and Exchange Commission and BaFin, Germany’s financial markets regulator, are currently investigating allegations that Deutsche Bank AG’s DWS Group asset-management arm overstated the environmental and social credentials of some ESG-labelled investment products.

DWS rejected claims it overstated ESG assets. “DWS strives to always be transparent to the market, our clients and stakeholders in our message that the road to a sustainable future is long and hurdled,” it said in its statement issued on 27 August. At the end of 2020, DWS had labelled US$540 billion of assets as “ESG integrated”, representing more than half its total portfolio.

The findings exposed in the report point to, “a need for closer oversight of the sector”. A “lack of transparency” around the extent to which funds’ strategies seek to achieve climate alignment, is also identified as a key issue.

Policy to address a lack of transparency and consistency in sustainable finance is almost exclusively being considered and implemented in European markets, through mechanisms such as the European Union Sustainable Finance Disclosure Regulation and Taxonomy.

In Asia, which is still largely exposed to and reliant on coal-fired power, pledges from country leaders to reach carbon neutrality are expected to drive “promising changes” to sustainable investments in relation to decarbonisation, renewable energy and green transport, according to GSIA’s annual investment review.

Global investors are also ramping up pressure in the Asian markets to integrate sustainable investment strategies and corporates to address and integrate ESG issues.