A World Economic Forum study has revealed a plateau in the transition of energy markets; Asia ranks poorly in an index that measures the shift to sustainable energy systems.

A report published by the World Economic Forum (WEF) has revealed that while most countries are making some progress to shift to more sustainable energy systems, the pace is insufficient to keep climate change in check.

Asian countries rank poorly in the Energy Transition Index (ETI) of the study, with Singapore leading the region in 12th position, Malaysia in 15th, but most South and Southeast Asian countries languishing from 50th to 70th position. 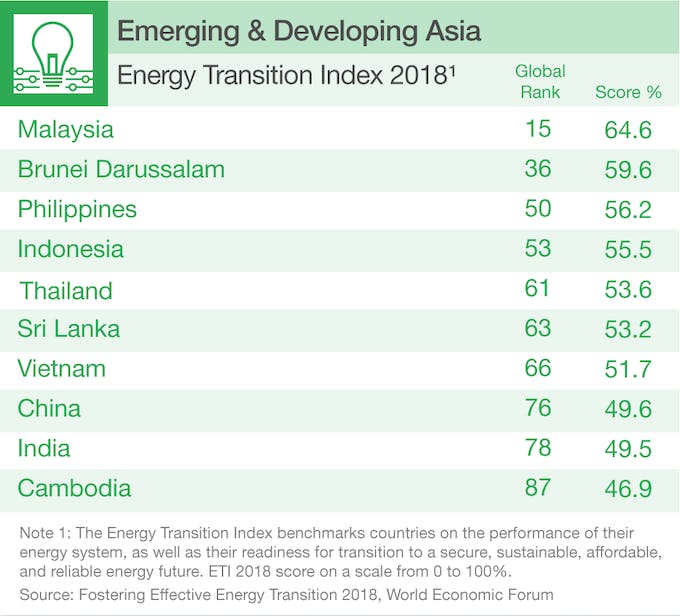 Developing countries in Asia ranked by their existing energy systems and their ability to transition to a low-carbon energy future. Image: World Economic Forum

The ETI ranks countries based on the current performance of their energy system on three fronts – energy security and access, the environmental sustainability of the system, and the potential for inclusive economic growth and development. It also ranks a country’s potential to transition to a low-carbon energy future.

Among those three dimensions, environmental sustainability showed the lowest performance and improvement rates.

Between 2013 and 2018, 45 countries including Japan, China and India saw decreasing scores for environmental sustainability. This is due to rising air pollution and particulate emissions in more than half of the countries, causing around six million premature deaths globally each year, the report noted.

Energy intensity—a measure of the energy efficiency of a country’s economy—has improved and driven progress in environmental sustainability. Decreasing energy intensity and improving efficiency are two of the key levers to achieve the goals of the Paris climate agreement, reported WEF.

Security and access remains the area with the widest disparity between highest and lowest performing countries.

Almost all countries without universal electricity access have seen progress. In absolute terms, however, the number of people without access to electricity is not declining quickly enough to meet the UN objective of universal electrification by 2030. There are still one billion people globally living without electricity.

Additionally, household electricity prices have been rising in real terms since 2013 in more than one half of countries globally, despite an overall fall in primary fuel prices.

The report also identified countries that demonstrate above average potential to transition to a low-carbon energy future despite a low ranking in the ETI. These countries included Asian economic powerhouses China and India.

China has the potential to leapfrog to a more sustainable energy system because of the government’s push to replace petrol vehicles with electric ones and a political commitment to address environmental challenges, including plans to introduce a carbon trading market.

However, China has the highest primary energy consumption and highest energy-based carbon emissions globally, and is also a big investor in fossil fuels projects beyond its borders. Within the ETI, China ranks in the bottom quartile and its environmental sustainability score is 30 percentage points below the average. The low environmental sustainability score is mainly due to China’s dependence on coal as the primary energy source.

China’s transition readiness indicates that it has made large efforts to prepare itself for the energy transition, despite its relatively unfavourable energy system structure.

India has also improved its performance by making strides in energy access and reducing fossil fuel subsidies. The country has taken a series of bold measures, particularly on renewables deployment and energy efficiency, and ranks as an “emerging country”.

Between 2013 and 2018, India improved its performance score by 5.6 percentage points, mainly with improved energy access, reduced subsidies and reduced import costs. However, the road to continuous access to power and clean cooking fuel for all is long; India still has the largest share of people globally who lack electricity access.

The future of energy

Even in today’s environment of fast-paced technological advancement, successful energy transition and system improvement will not happen overnight, the report noted.

While more than 80 per cent of countries have improved their energy systems, more effort is needed to tackle the world’s energy-related challenges. 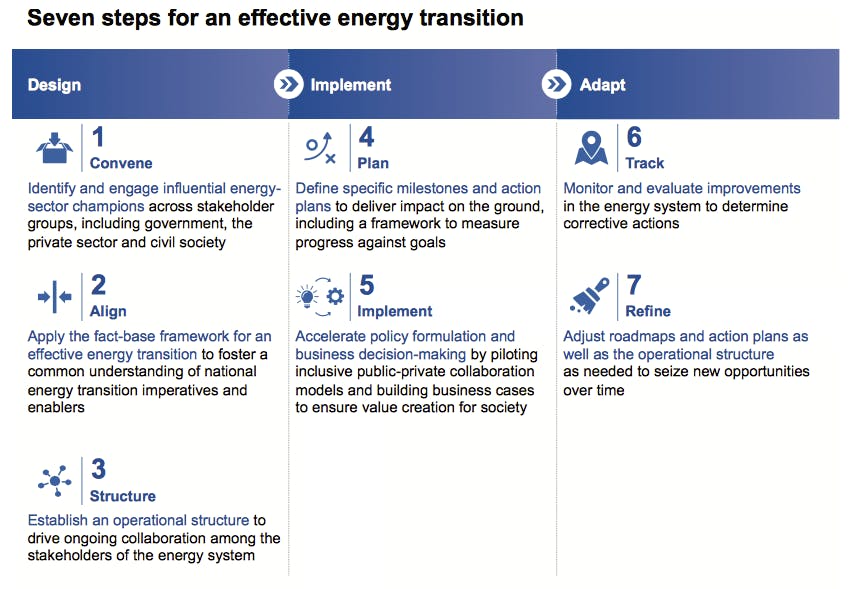 Recommendations on how countries can effectively transition to a low-carbon energy future. Image: World Economic Forum

One suggestion is to remove fossil fuel subsidies and reduce energy intensity, which have been shown to be beneficial on multiple fronts: energy security, sustainability and inclusive economic growth.

Fatih Birol, executive director, International Energy Agency and co-chair of stewardship board, World Economic Forum, said: “There is an urgent need to speed up the transition towards more sustainable energy production and use. To do this we will need to harness energy technologies and deepen cooperation between governments, industry and stakeholders.”