Reducing global emissions in line with the Paris Agreement’s goals would have a clear impact on global temperatures within two decades, a new study says.

While climate research often focuses on the impacts of global emissions cuts in the second half of this century and beyond, the new analysis suggests there are also “substantial near-term benefits”.

Shifting to a pathway in line with 1.5C of global warming, for example, would reduce the risk of seeing “unprecedented warming rates” in the next 20 years by a factor of 13 compared to a no-mitigation scenario, the researchers say.

The findings means that “immediate and strong action on climate change can bring benefits within current lifetimes and not just far into the future”, the authors tell Carbon Brief.

In the new study, published in Nature Climate Change, the researchers investigate how different levels of mitigation affect global warming rates over the next 20 years (2021-40).

This is a “key period” for policymakers making adaptation decisions, the authors note. For example, the paper says, “crop breeding is unlikely to keep pace with climate impacts on agriculture over this period under current rates of warming”. And, they add, 20 years is a typical time horizon for planning adaptation options, such as flood defences.

But it is harder to pinpoint the benefits of climate mitigation in the next few decades compared to the second half of the century, lead author Dr Christine McKenna from the University of Leeds and her coauthors tell Carbon Brief.

This is partly because “natural cycles in the atmosphere and oceans – such as El Niño and the Pacific Decadal Oscillation – cause ups and downs in the rate of global warming, which can temporarily mask or amplify human influence on global temperatures”, they say.

Another reason is that, even if emissions fall, global temperatures will continue to rise for the time being as atmospheric CO2 levels would still be increasing. Stabilising the Earth’s climate will require worldwide emissions to drop to net-zero, the paper notes.

These factors can “obscure any difference between pathways despite quite big changes in greenhouse gas emissions”, says Dr Chris Jones, a research fellow in Earth system and mitigation science at the Met Office Hadley Centre.

Jones was not involved in the new study, but recently co-authored a Carbon Brief guest post on the impact of Covid-19 lockdowns on atmospheric CO2 levels. He tells Carbon Brief:

“This leads to a risk that mitigation is seen as something that won’t bring much benefit for many years. Or worse, that we needn’t bother now and we can leave it for future generations.”

To tackle these challenges, the study employs two approaches.

The first uses model projections from the sixth Coupled Model Intercomparison Project (CMIP6) – a collaborative climate modelling effort from scientists around the world. These models are “based on our most up-to-date understanding of the climate system”, the authors say, but because they are designed to simulate long-term climate changes they “do not necessarily simulate real-world [natural] variability accurately”.

The second approach combines multiple estimates of observed natural climate variability with simulations from a simple climate model called FaIR (“Finite amplitude Impulse Response”). The benefit of using FaIR is that it can easily be run “thousands of times allowing a broader range of possible futures to be explored”, the researchers say.

Using the two approaches, the researchers ran model simulations for a range of different emissions scenarios for the next two decades. The charts below show the results: for the trend in global average surface temperature, in degrees Celsius per decade (left); and the average warming over 2021-40 relative to the present day (right).

Each box in the charts represents a different scenario. These include emissions in line with keeping global warming below 1.5C (green), below 2C (blue) and those according to the current international pledges – known as nationally determined contributions (NDCs) – under the Paris Agreement (grey). They also ran two “no-mitigation” scenarios that assume the world does not tackle climate change – an “average” pathway (orange) and a “worst case” one (brown).

(Apart from the NDC scenario, each one corresponds to a Shared Socioeconomic Pathway (SSP) that climate modellers use to explore how society, demographics and economics might change over the next century. These are included in the caption of the figure.) 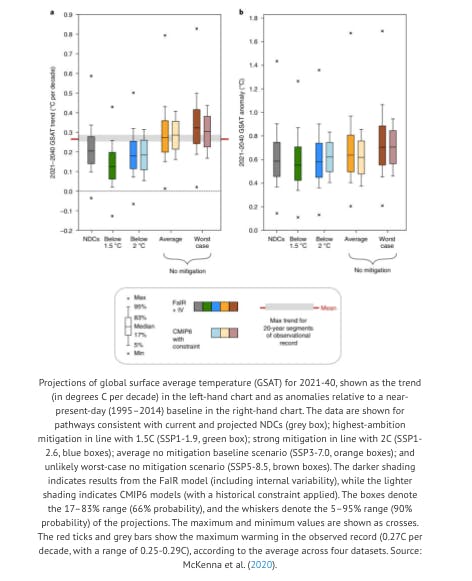 The height of each box represents the range in projected warming, with the horizontal line in the middle indicating the central estimate. Where there are a pair of boxes, the left-hand box shows the results from FaIR, while the right-hand box shows CMIP6 models.

(Note: the authors explained to Carbon Brief that there are no NDC or “below 1.5C” results for CMIP6 because the former was not used as an emissions pathway for CMIP6 and not enough models were available at the time for the latter.)

It is worth noting that the differences between the scenarios is smaller in the right-hand chart than the left-hand. This reflects the different ways in which the charts capture near-term warming, explains McKenna.

“Since the trends estimate warming over a later time period and the difference in emissions between scenarios becomes larger over time, we would expect to see a larger difference in the trends than in the anomalies.”

The strong mitigation scenarios also reduce the risk of the world experiencing stronger warming than observed in the past, the authors tell Carbon Brief:

“Making such rapid and deep emissions cuts [in line with 1.5C] would mean that the risk of experiencing warming rates that are larger than anything previously seen is 13 times lower than in an ‘average’ future where we do not reduce emissions and continue to rely heavily on fossil fuels.”

Unsurprisingly, the lower emissions scenarios offer a better chance of not passing the 1.5C threshold of human-caused warming over the next 20 years.

Using the FaIR model, the 2C scenario has a 42 per cent likelihood of passing 1.5C, while this almost doubles to 78 per cent under the average no-mitigation scenario. Under the 1.5C scenario, the study estimates that there is 74 per cent chance that 1.5C is not crossed.

The central estimate of the new study suggests that the 2C and NDC scenarios would cross 1.5C of warming in 2043 and 2039, respectively. For the no-mitigation scenarios, the threshold is passed in 2035 and 2033 for the average and worst-case pathways, respectively.

(Last week, Carbon Brief published its own analysis of when the 1.5C and 2C might be exceeded, according to different emissions scenarios and using CMIP6 models. Central estimates of no-mitigation scenarios suggest 1.5C could be passed around 2030-32.)

Overall, the new findings mean that “even with natural variations in climate, stringent emissions cuts will give us a greater chance of avoiding the impacts that more rapid and extreme warming could bring in the near-term”, McKenna and her colleagues say:

“In short, immediate and strong action on climate change can bring benefits within current lifetimes and not just far into the future.”

The findings “make a compelling case that there are benefits to be seen much sooner than we might have thought”, says Jones. He adds:

“While changes in warming relative to present day might be similar over the next 20 years, the speed of warming is much more likely to be lower if we take action now.”

This is “a bit like putting the brakes on the Titanic”, he says:

“It takes a long while to notice the effect of slowing down, but the sooner we start to slow the vessel the more chance we have of avoiding danger.”

The new paper comes to a slightly different conclusion from two other recent studies on mitigation and near-term warming.

For example, a Nature Communications study led by Dr Bjørn Samset at the Center for International Climate Research (CICERO) – published in July this year – suggested that strong mitigation of different greenhouse gases and aerosols could be “visible by mid-century, but likely not before”.

The Samset paper focused on reducing individual components of emissions in isolation – such as CO2 or methane alone – explain McKenna and her co-authors. In contrast, the new study brings together the effect of reducing all emissions in combination, they say:

“Reducing all our emissions has a larger effect on global temperatures than reducing only one component, hence explaining why we find detectable benefits earlier.”

Another paper – by Dr Jochem Marotzke at the Max Planck Institute for Meteorology and published in WIREs Climate Change in 2018 – finds that, “even if CO2 emissions fall after 2020, there is a one‐in‐three chance that global warming will speed up until 2035 instead of slowing down”. It warns, therefore, that it is “crucial to have realistic expectations of the efficacy of climate policy in the near-term”.

There are other differences between these two studies and the approach used by McKenna. For example, McKenna’s study considers a “below 1.5C” scenario, while the strongest mitigation pathway in the other two studies is equivalent to below 2C. In addition, explains McKenna and her colleagues, “we use observations to estimate the effect of natural variability on near-term warming”, while the other studies “estimate this using a climate model”. They explain:

“Since variability in global temperature is generally larger in climate models that in the real-world, [this] method may overestimate the effect of natural variability, masking the signal from emissions reductions.”

The approach taken in McKenna’s study “appears to be the more appropriate approach on how to assess the near-term effects of mitigation”, says Dr Carl-Friedrich Schleussner, head of climate science and impacts at Climate Analytics, who was not involved in the research.

He tells Carbon Brief that the “not-so-marginal” effect of strong mitigation in the coming decades is also “much closer to what we should be communicating to policymakers and the wider public”.

Samset says that the results of his work are “fully consistent” with those of the new “very elegant” study from McKenna and colleagues. The key difference is with the 20-year timescale that the latter uses, he tells Carbon Brief:

“It is true that, in a climate context, this is short and the shortest interval we can meaningfully consider if we want to average out natural variability. However, it is also more than two election cycles in most modern democracies. A point that both Marotzke (2019) and Samset et al. (2020) try to make is that there we may well see a situation where emissions decline rapidly in the coming decade, but the measured temperature and warming rates stay high.”

But the key message from the new study is, he says, “that, yes, rapid reductions win us a lot in terms of avoided climate risk”. He concludes:

“That is great and a very important conclusion to highlight. The surrounding literature, however, still cautions that there will be short-term noise on the way.”